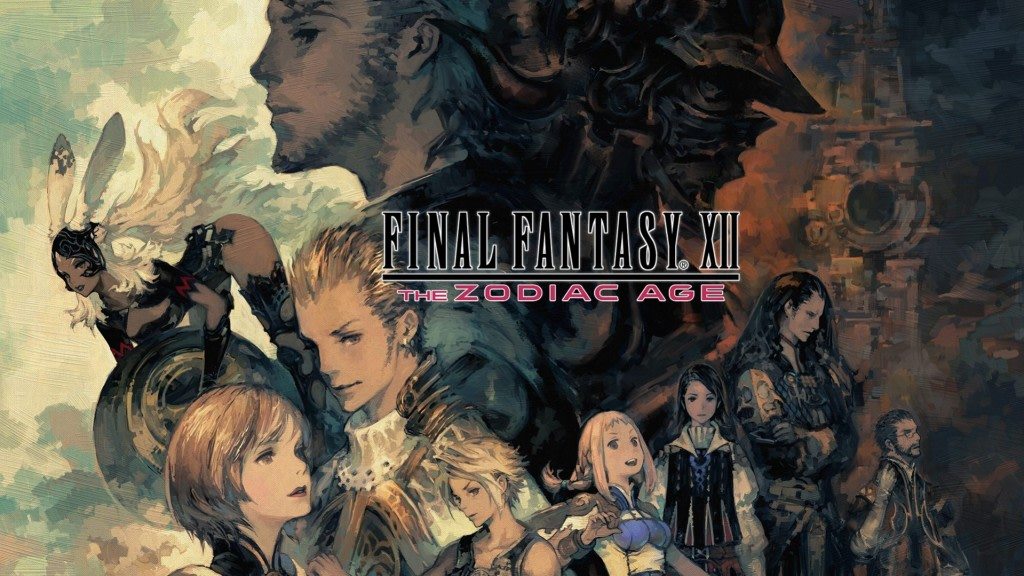 If you love tweaking your JRPGs and want to see the most grounded Final Fantasy story yet, then Final Fantasy XII: The Zodiac Age is the game for you.

In a nutshell, I adored the ambience, exploration, and dialogue of TZA, while finding the main story bland and the upgrade/equipment and combat systems often overwhelming. Luckily for me, I had a helpful stream chat to help me with the best gambits to immediately purchase and implement. Perhaps discovering the optimal setup is a source of positive discovery but I was happy to get the essentials figured out immediately.

The first hour was a great indication of the rest of the game. The opening cinematics were beautiful and intriguing, yet the complex multi-nation politics confused the heck out of me. Keeping a grasp of the roles was often beyond my reach. Consequently, I often felt disconnected from the main plot, not feeling the full effect of certain developments. This was true for the main MacGuffin: Nethecite. I wanted to see more direct examples of it and the opposing forces power to better relate.

I appreciate that this is a much more grounded Final Fantasy than I’ve ever played before. Most Final Fantasies have you control a small group that just so happens to ultimately destroy a god and save the world. FF XII instead gives you a more realistic perspective (relatively speaking when a queen, sky pirates, disgraced soldier, street kids, and a playboy bunny get together).

The story is told from the ground as much larger events happen around. I loved this idea but felt they missed so many examples to connect with the larger story. The story features an obliterated nation but this is rarely referenced. It would have been effective to meet an NPC who perhaps ran away from home before the attack and now struggles with the guilt and grief of losing their home so catastrophically. Some lands were under Imperial occupation but other than a few guards posted around it didn’t feel very oppressed.

My main criticisms stem from this lack of connection to the complex politics of the main story, but I did really enjoy so many of the smaller moments and dialogue. 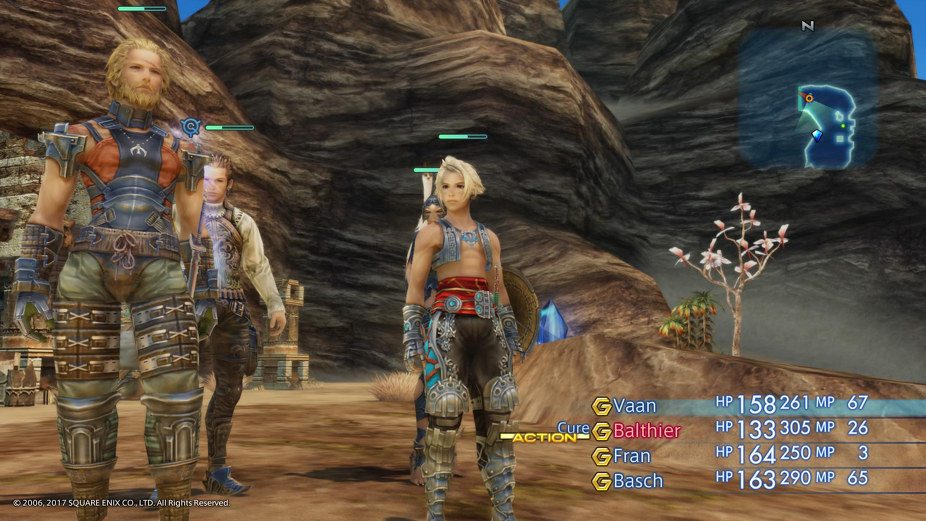 The jail scene was fantastic, I won’t spoil, but a few events with guards felt brutally visceral, realistic, and shocked me to see in this franchise. That moment set the tone and stakes in a way I wanted to see on the larger scale.

Where the main plot often missed the mark, the dialogue absolutely made up for it. Although the characters spoke like they were in a play, it was almost always consistent with their characterization and often made me laugh. Balthier in particular has countless lines that cleverly hit the mark, exactly the way I wanted his Rogueish character to do. The dialogue is a wonderful highlight that completely salvaged my story quibbles and further drove home the grounded perspective.

The gambit system was a wild experiment of the times that I admire but am glad was not revisited. Programming your character’s actions can be tedious and felt more stand-offish than any other JRPG I’ve ever played. From our stream chat’s experience, it appears the bosses (of which there are plenty) are much easier to defeat, further removing me from the equation. Only the final confrontation forced me to pay attention in order to succeed. But with the ability to sub in new members for KO’d ones, the consequences are soft. Taking more direct control is also quite tedious, so it’s probably for the best that I didn’t have to for the majority of the game.

While controlling characters directly can be tedious, the Gambit system removes much tedium from exploration. No longer are you ripped from the world map to a forced random battle, instead you can simply run through enemies to get where you need. The remaster adds the incredibly wonderful 2x and 4x speed. This is a feature I would like to see in every single game, remaster or not. 2X was perfect for quickening the pace while maintaining control, while 4x makes crossing vast areas or backtracking as simple as can be. I thanked Square Enix for this feature during every single play session. Combining speed-up with the Gambits means you could easily leave your characters to grind while you make a sandwhich or even sleep.

The original game did not have jobs, every character could access every ability. The International Zodiac Job System release added one job per character, and this version has two. Picking jobs is a daunting and powerful mechanic. It adds a tremendous amount of depth but can be overwhelming and most likely makes the game quite a bit easier depending on your selections. The ability to choose two jobs means you can counteract weaknesses and create incredibly powerful characters. This can kill the difficulty of the mainline quest, but for those that love post-game challenge (Yiazmat anyone?) the system gives them more control.

You must unlock the ability to use weapons, and each job class has specific weapons. With two jobs to manage, I found the loop of spending upgrade points and picking which weapons to purchase quite daunting (I’ve said ‘overwhelming’ too often). A one-job system means you can focus on specific weapons and armor, but two-jobs meant I was agonizing over heavy vs light vs mystical armor and the different weapons when spending valuable upgrade points and gil.

The License Boards could have done with a bit more organization or filtering. Tracking down a specific upgrade is a terrible chore of monotony.

The two-job system is probably best appreciated by veterans of the original game that want a deeper experience and new options. As a newbie, it hurt my brain until I hit a solid track. However, if I were to go back, I now have plenty of ideas for crazy combinations to try! 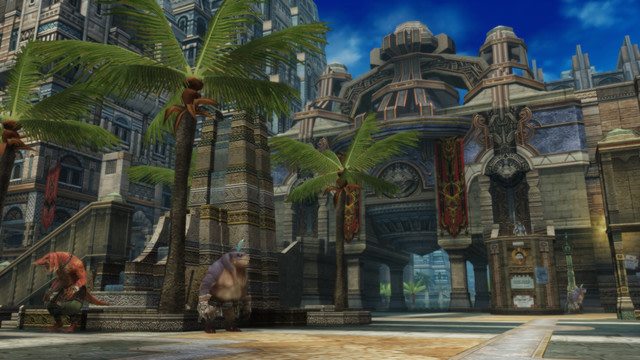 Square nailed the ambience of exploration. I adored visiting new areas that felt lived in. Cities were populated and bustling with plenty of nooks and crannies. The cities were designed for people to actually use. There are seedy areas, water sources, clubs, bazaars, and much more. I have many fond memories of discovering each new spot on the map. Along with the dialogue, the ambience conveyed from the world was my favorite part of the experience. 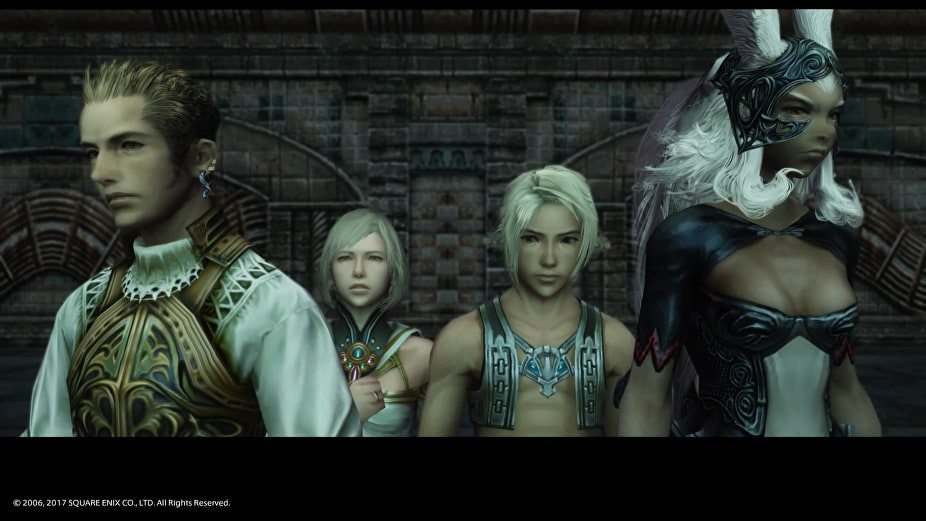 The first few hours of Final Fantasy XII impressed me so much I wondered if it would be my new favorite in the franchise. The writing is incredible, the grounded world felt wonderful to explore, and I couldn’t wait to explore more of this world with this group of people that felt like people. While I enjoyed my playthrough, I feel little desire in going back. I play for story and feel FF XII’s replay value is reserved for those that love side content, tinkering, and completionism.

I can heartily recommend taking at least one trip through FF XII but whether you buy a house and settle down depends on what you want from a JRPG.