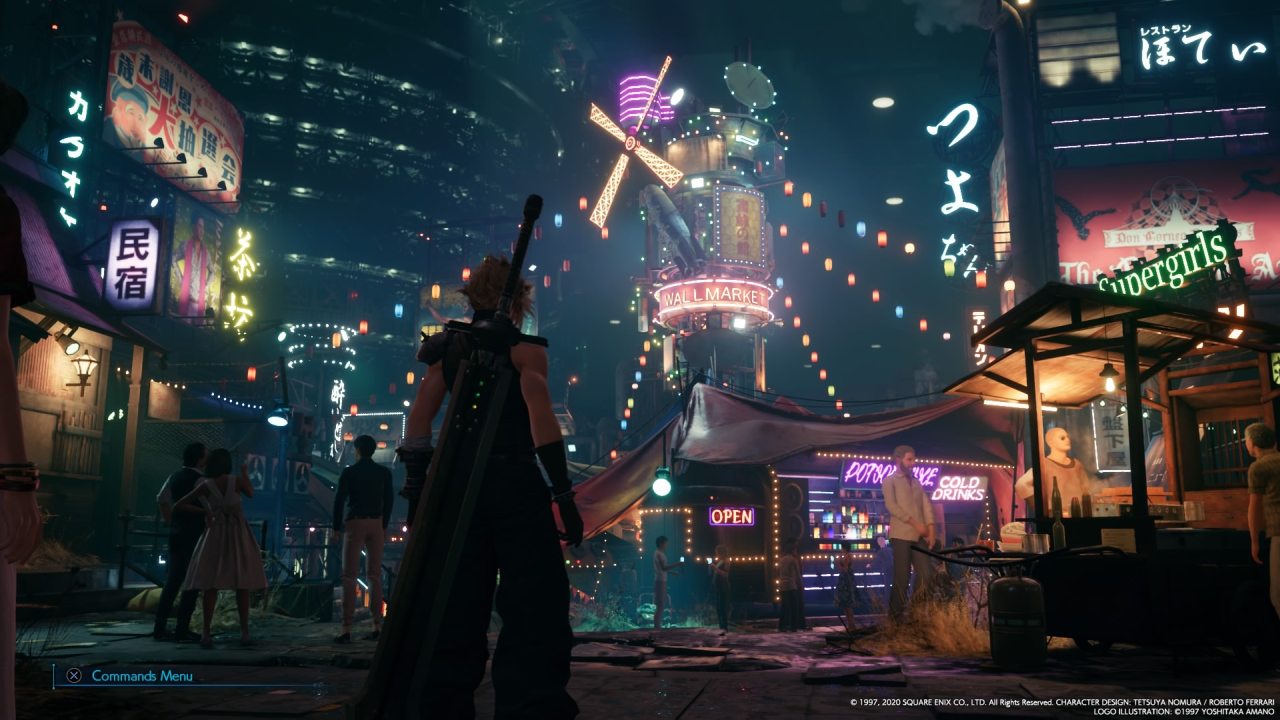 A World of Mako

If you’ve played the original Final Fantasy VII, you’ll no doubt remember the characters and plot with great clarity. For those who are new to the experience, Final Fantasy VII Remake follows a group of young resistance soldiers living in the slums of Midgar, a futuristic city fueled by mako, the essence and life-blood of the planet it exists on. Frustrated that the elite of Midgar are profiting off of the precious resource and sucking the planet dry, the group of soldiers execute a dangerous attack on one of the several Mako Reactors, setting off an explosion in the city. Wanted by the public police force, the mercenary Cloud, along with his compatriots Barret, Tifa, and other members of the resistance, start to formulate a plan to overthrow the mega-corporation known as Shinra. Final Fantasy VII Remake currently only covers the initial Midgar portion of the original game, with a second release planned that contains the rest of the story.

You’ll spend most of the adventure playing as Cloud Strife, a trained super-soldier with enhanced strength and a desire mainly for money. As Cloud, you’ll explore the various industrial areas of Midgar, from the slimy slums to the vibrant and colorful entertainment district known as “Wall Market”. The game plays mostly as a linear experience, with a handful of side quests spread out over a few larger, explorable areas. You’ll meet plenty of memorable characters, including the innocent flower girl Aerith, the stylish and intimidating agents Rude and Reno, as well as plenty of secondary characters. It’s great to see these classic characters in all their modern glory, but sometimes their costumes are more compelling than their personalities.

Overall, Final Fantasy VII Remake tells a modified, but mostly faithful version of the original story. There are new characters and subplots, most of which bog down the main narrative, but the majority of it will be appropriately familiar to fans. Some moments are truly heartwarming and rich with excitement, but there’s far too much downtime and some significant pacing issues. Too much of the game is spent idly walking from one area to the next, while characters spew exposition and filler. The game’s story also feels incomplete due to its episodic nature, with many of the best parts of the story yet to come. For those who lack nostalgia for the classic version, Final Fantasy VII Remake‘s story might be a bit underwhelming. Even for longtime fans, there will be some undeniably aimless sections, which weaken the overall flow of the storytelling.

Apart from some story changes, the biggest difference between the original Final Fantasy VII and Remake is the combat system. Whereas the classic game contained a turn-based battle system, Remake opts for a more action-packed, real-time battle system. Similar to games like Final Fantasy XV and Kingdom Hearts III, you’ll hack and slash your way through foes, use magical attacks to weaken enemies, and upgrade your weapons and gear. Although the combat is exceptionally easy in the beginning, things can become pretty tough partway through the experience, requiring fast reaction times and quick thinking. Final Fantasy VII Remake is still very much a game that involves playing as multiple characters and understanding their movies and abilities, as you can switch between any available character in your party during a battle.

Generally speaking, fighting baddies is pretty easy to understand. You can perform basic and heavy attacks simply by tapping a button, which builds up your special ATB gauge. Once you’ve built up enough ATB power, you can execute special attacks, cast spells, and perform devastating abilities known as Limit Breaks. Different weapons offer unique special attacks, while the expansive Materia system lets you equip a wide variety of spells, ranging from offensive incantations to team buffs and healing. Enemies have unique weaknesses to look out for, and when exploited, can cause them to stagger for high damage opportunities.

It’s a battle system that feels immediately familiar to anyone who has played a recent RPG from Square Enix, but it’s also easy enough for newcomers to figure out without much hassle. For the most part, you can obtain victory in battle by simply pressing the attack and using healing spells. However, if you don’t take the time to learn some of the more complex aspects of the battle system, you might be completely wiped out in late-game fights. Luckily, the game also has an “Easy” and “Classic” mode, which provides slower and less challenging combat, allowing you to experience the story without becoming frustrated by tough difficulty spikes. While fans of the original Final Fantasy VII might be annoyed by the change from turn-based combat, the flashy action is entertaining and enjoyable, even if it feels far less strategic than expected.

Hero of the Slums

As a mercenary, Cloud can pick up some side jobs from time to time. Although Final Fantasy VII Remake is mostly a linear experience, there are a few areas that allow you to roam freely, accepting quests for civilians and defeating monsters. For the most part, the secondary quests are used for gameplay padding, offering an extra helping of combat where the main story lacks it. Many of the quest objectives are of the “go here, kill that” variety, but every now and then you’ll run across a particularly unique or engaging mission.

You’ll also find a handful of mini-games and other more quirky side-activities during your adventure. These help to lighten up the mood and inject a weirder vibe into the entire experience, often reminding me of the mini-games in the Yakuza franchise. You’ll play darts, compete in exercise competitions at a gym, and use your sword to gain high scores in a box-slashing contest. This kind of wacky gameplay occasionally crosses into the main story arc, but the majority of the weirder stuff is tucked away in side content. Whenever I encountered one of these fun distractions, it was easy to play them a few times (this goes doubly for the surprisingly addictive darts).

The inclusion of side missions and semi-open world content is a double-edged sword, as the extra combat is enjoyable, but it comes at the cost of pacing problems. After the adrenaline-filled opening hour, the game takes its sweet time introducing important characters and plot points, resulting in a few slow-paced introductory hours. In fact, Final Fantasy VII Remake often subverts your expectations (for better or worse) by changing up certain story beats and adding in new scenes, but these changes feel more like opportunities to add in some easy gameplay hours. While I enjoyed the more combat-intensive quests in Final Fantasy VII Remake, I felt like they generally distracted from the main plot and characters.

The Sounds and Sights of Midgar

If there’s one thing about Final Fantasy VII Remake that is consistently impressive, it’s the game’s presentation. Across every area, the game looks and sounds fantastic, with breathtaking visuals and a wonderful score. There’s a staggering sense of scale as you walk through the low slums, catching glimpses of the upper-levels of Midgar where the rich reside. Things get exceptionally colorful around a dozen hours into the game, but the entire journey is a visual feast. Whether you’re playing on an older PlayStation 4 or a PlayStation 4 Pro, Final Fantasy VII Remake is always beautiful to behold.

Any fan of video game music will be familiar with many of Final Fantasy VII‘s catchy melodies, which have received a modern update of their own. Classic songs like the battle victory theme have been worked into the game in some fun ways, with many memorable tunes dotting moments of fan service. Many of the game’s songs can be collected from Midgar civilians or purchased from vending machines and shops, which make them accessible at various jukeboxes scattered throughout the world. Generally speaking, Final Fantasy VII Remake has an incredibly strong selection of songs, guaranteed to remain stuck in your head for dozens of hours after completion.

As one of the most hyped up games of all time, Final Fantasy VII Remake had a lot of expectations to live up to. For better or worse, the game takes plenty of liberties both in plot and gameplay, resulting in an experience that is remarkably different from the original. The action is stylish and invigorating even if it’s a bit easy, pushing you through a beautiful selection of graphically stunning areas. If you’re one of the many gamers with nostalgia for the original, Final Fantasy VII Remake will definitely tug on your heartstrings.

Despite its visual splendor and overall spectacle, Final Fantasy VII Remake has its shortcomings. The game is paced poorly, characters are underdeveloped, and there’s far too much filler content. Depending on how many side-activities you indulge in, Final Fantasy VII Remake will take you anywhere from 20 – 40 hours to complete. Once you’ve reached the conclusion, you’ll either feel a bit cheated or hungry for the next installment. No matter how you cut it, Final Fantasy VII Remake is a unique take on a beloved classic, and a game that will undoubtedly spur fan debates for years to come. It’s an imperfect but enjoyable adventure through a breathtaking world, offering many gamers a pleasant trip down memory lane.