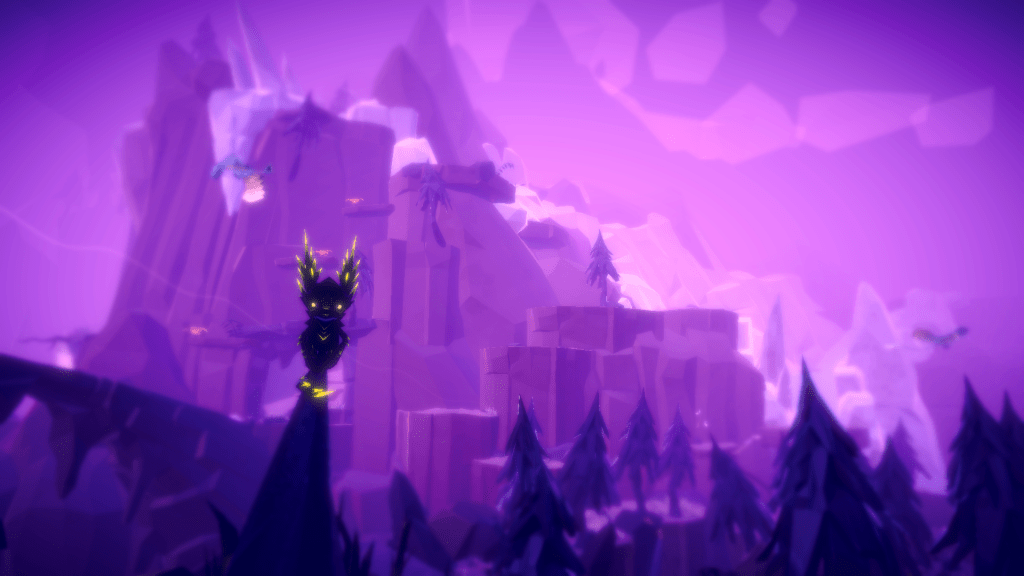 Fe is a brightly colored 3D platformer, developed by Zoink and published by EA.  Available on PS4, Xbox One, PC, and Nintendo Switch, the expressive game sees you controlling a small animal known as a fe.  Exploring the neon environment, you’ll meet new animal friends, collect crystal shards, and grow in power.  The game is quite pretty on the eyes, but is it any fun to play?  Let’s find out if Fe is more than just eye candy. 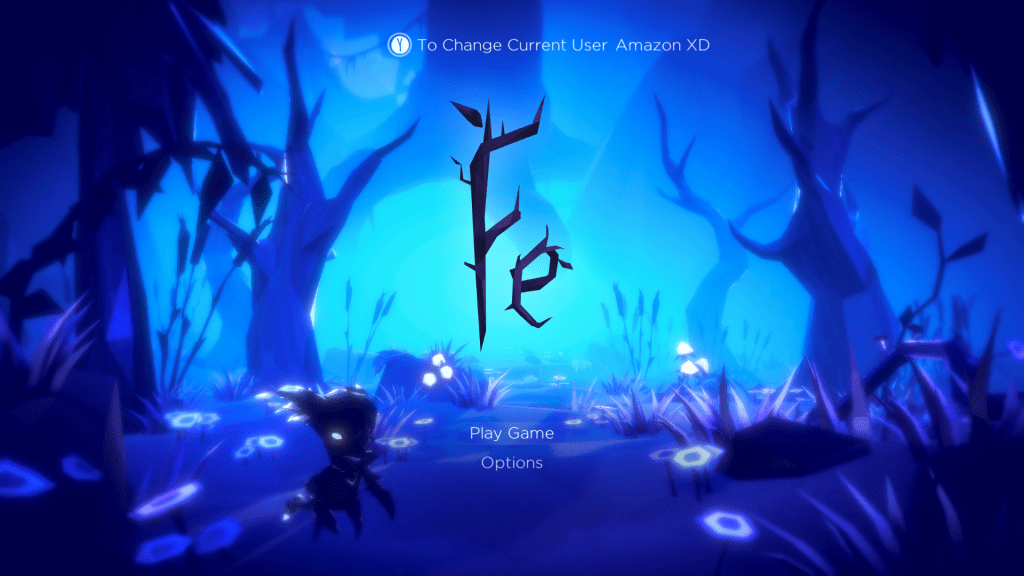 Fe drops you into its world immediately, with no explanation as to why you are there.  Guided only by the indigenous animals, you explore Fe‘s sizeable world in search of glowing pink crystals.  As you progress through the game, you’ll meet new species of animals.  Meeting animals and learning their language allows you to access new areas, allowing you to dig deeper into Fe‘s unraveling mystery.

Scattered around the world are bulking sentries who, upon sight, capture your character in a mesh cage.  You’re not the only animal to get the cage treatment, as this seems to be a favorite hobby of theirs.  Besides their foreboding presence, not much information is given about them.  Occasionally, you’ll stumble upon a collectible that allows you to see through their eyes, learning more about their origins and motivations.  The entire game has no dialogue, with characters only interacting through song and chirps.  The story being told in Fe is light and symbolic, and generally speaking, rarely the focus. 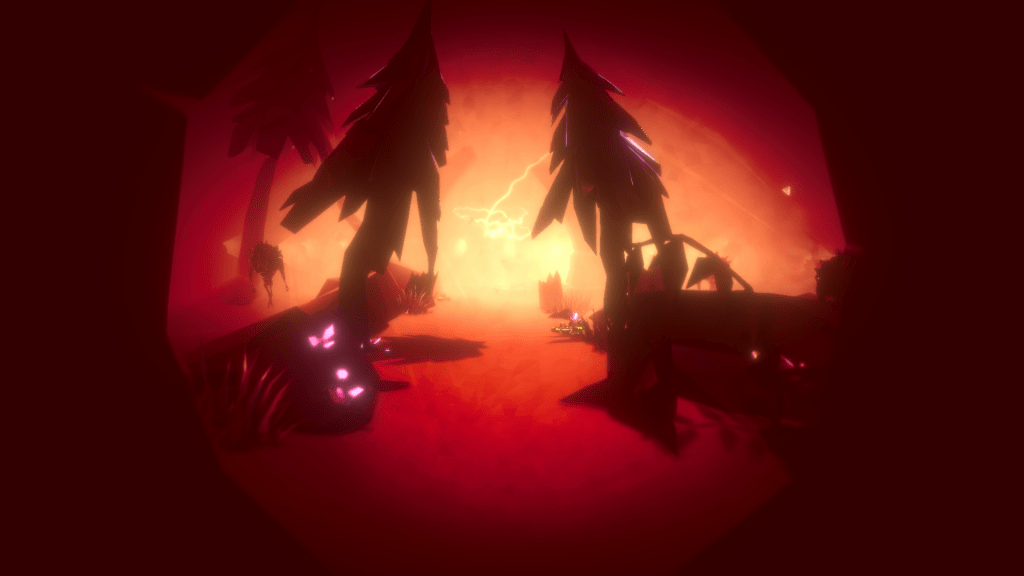 The Power of Song

Instead, most of your time in Fe will be spent exploring your surroundings.  There is a critical path to follow, and although Fe doesn’t hold your hand in explaining its mechanics, it does do a good job pointing you in the right direction.  At any point during the game, you can pull up your map.  To ensure you never get lost, there is always a green waypoint marker indicating your next destination.  Players who need a bit more guidance can call on local birds who point a more direct path forward.

Your character, a small creature known as a Fe, has the ability to sing.  This is the main focus of gameplay, as you utilize different songs to interact with objects around the world.  In a way, Fe is kind of like Metroid; you start off with little to no powers, but through upgrades and power ups, you can eventually reach new areas in the world.  Each song is tied into a new species of animal, and learning a new song usually means you’re ready to explore a new area. 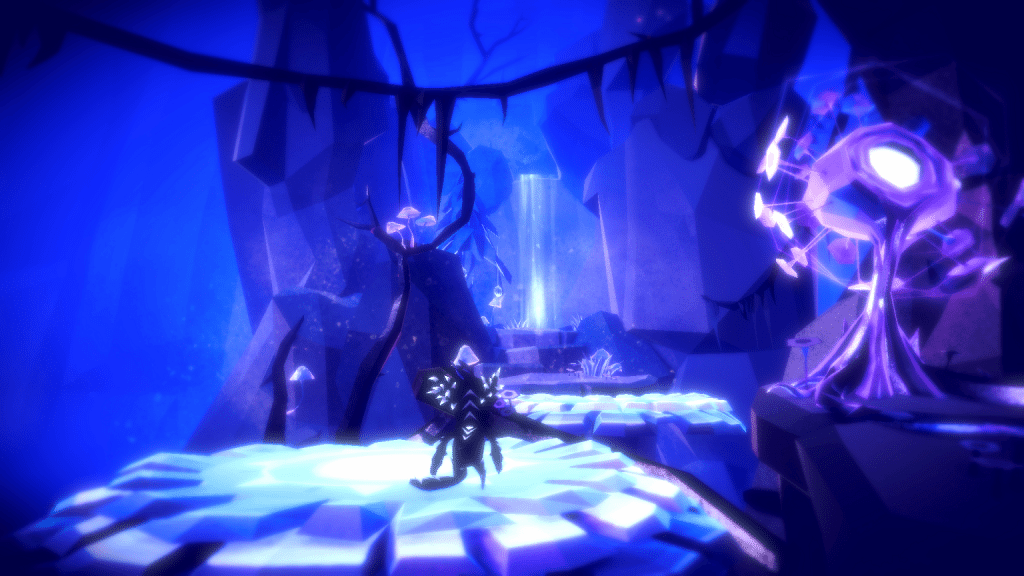 In addition to following the main path, you can spend time exploring and searching for pink crystals.  Scattered throughout the multiple areas of the game, these crystals give you a new ability when you’ve collected enough.  These abilities are quite powerful, including sprinting, gliding, and more.  The first few power ups are basically mandatory, but I quickly found myself faring just fine without upgrading.  Since Fe is mainly a game about following checkpoints and avoiding enemies, once I was happy with my movement skill set, I felt little need to continue.

The lack of importance wasn’t the only thing keeping me from exploring the nooks and crannies of Fe‘s world.  While I had a good time following the main path and seeing the sights as I went, scouring the map for pink crystals was less fun.  Although Fe‘s world is beautiful to look at, it’s not particularly fun to explore.  A few areas stood out as memorable enough to spend some time in, but most were only interesting on a surface level. 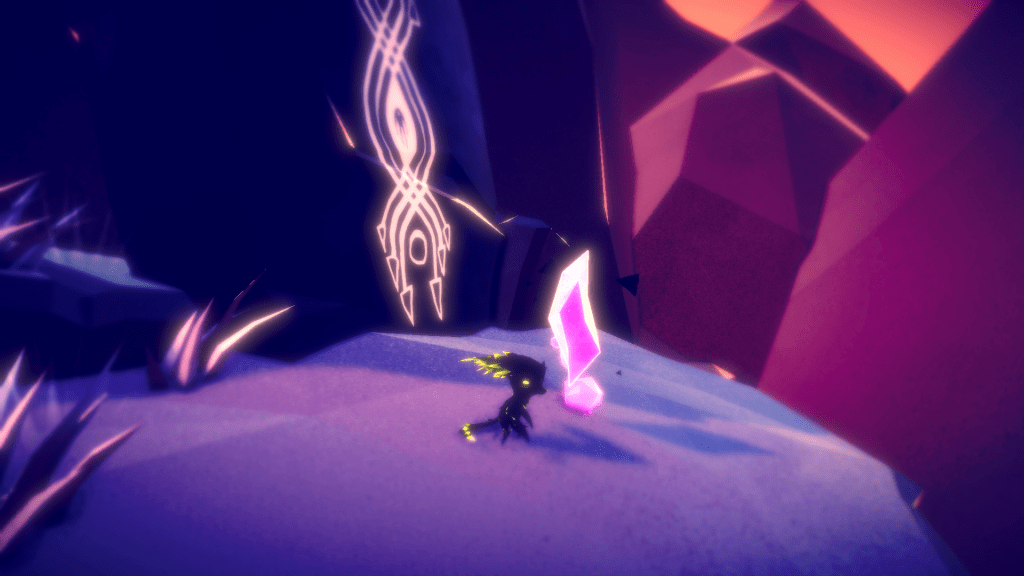 Fe‘s strongest feature is its visual style.  The world is full of sharp-edges and flat planes, with an oddly crystalized look to it.  The color palette accentuates the visual style, with use of soft but bright neon colors.  Many areas in Fe are washed with many shades of the same color; one area might be strikingly blue while another is mainly pink.  This often results in a beautiful and alien looking world, one that looks great from a high view.  It’s occasionally busy on the eyes and some areas are a bit too saturated with color (I’m looking at you, orange area), but for the most part, I was pleasantly surprised by Fe‘s art direction. 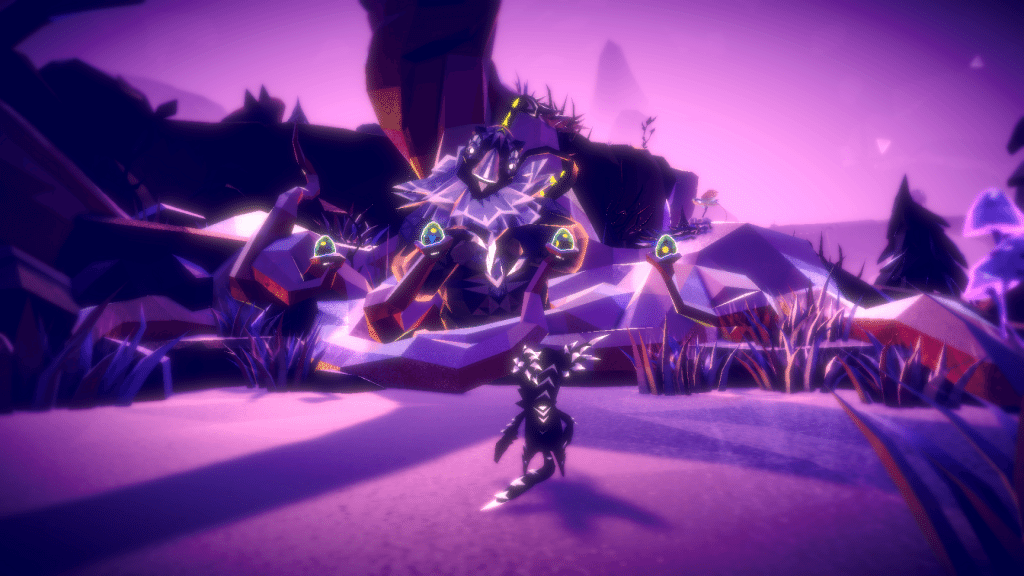 However, judging by how zoomed in the camera is, you’d think that the developers didn’t want you seeing the entire world.  Although it’s not nearly as bad as I might make it sound, Fe can be occasionally frustrating due to the oddly close camera angle.  In terms of both gameplay and visuals, the camera had a bad habit of making life more difficult.  This is especially bothersome during tough platforming sections, where a wider angle would make planning your jumps easier.

The sound design is well done, with the environmental effects like waterfalls standing out.  Overall, the sound design of Fe is great.  This is a good thing, since a large portion of the game’s idea revolves around using different songs consistently.  As far as music goes, the score is often very reserved.  I actually noticed a lack of music more often than specific tracks, although when the music caught my ear, I was pleased.

The Bottom Line on Fe

Fe is a relaxing game to play.  When you’re not trying to hide from the intimidating enemies that roam the land, the experience is often akin to hiking through a forest.  You’ll see the sights, interact with animals, occasionally solve some puzzles, and progress with ease.  A helpful amount of guidance ensures that you’ll never get stuck, providing a mostly stress-free time.

I finished the game in under 4 hours, but your amount of playtime may vary.  There’s numerous crystals to find and turn in, so fans of Fe have more content to return to once the credits have finished.  Unfortunately, I found the actual landscape of Fe to be a bit underwhelming, and wasn’t interested enough to continue searching.  It’s an undoubtedly pretty game despite the camera issues, and I was more than impressed visually speaking.  There are a few moments in Fe that wowed me, and the rest was a nice and relaxing adventure.  If you’re a fan of 3D platformers, there’s definitely some fun to be had with Fe.