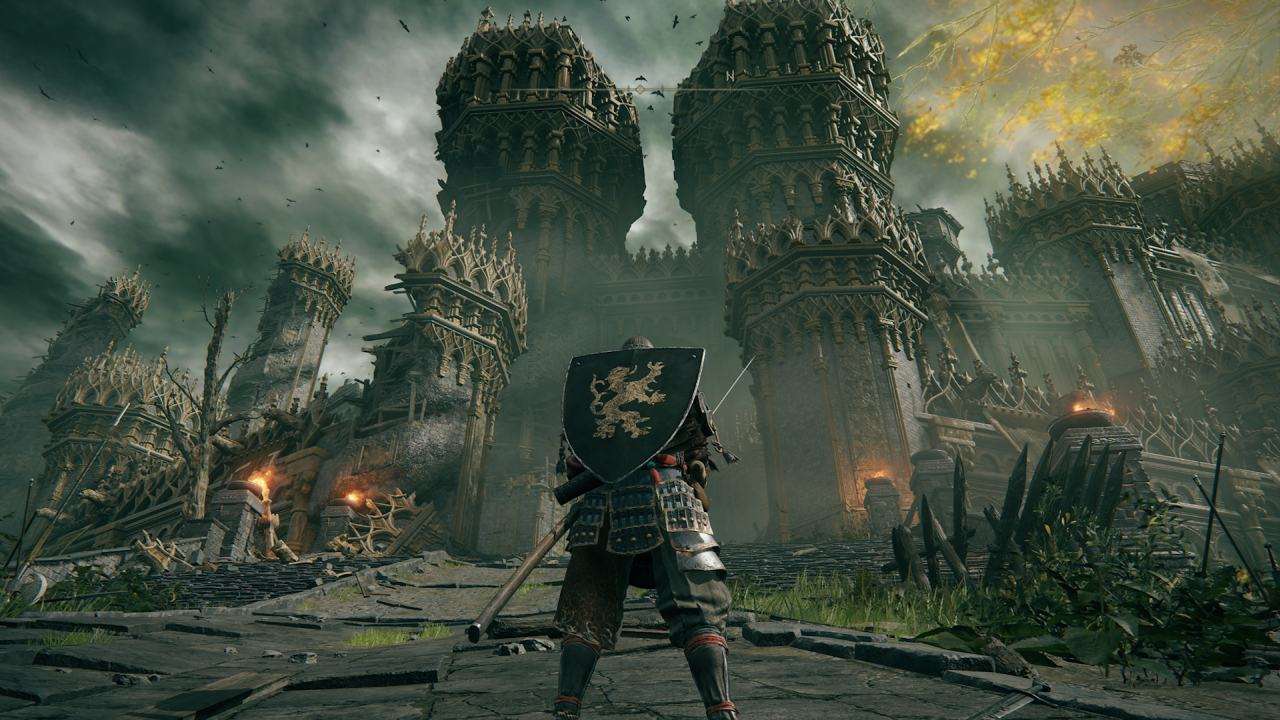 FromSoftware has had many successes with their signature brand of third-person action games, whether it be Dark Souls, Bloodborne, or Sekiro: Shadows Die Twice. Elden Ring is the latest adventure from this fan-favorite developer, which sends players into the vast and deadly Lands Between, where they must face down massive bosses and corrupted foes to reinstate peace. As both the most anticipated open-world game of the year and the next release by FromSoftware, Elden Ring has received massive amounts of hype. However, with a history of making games that are exceptionally difficult and hard to parse, does FromSoftware gain new ground with Elden Ring? After spending nearly 100 hours with the game, we’re ready to deliver our verdict. Let’s see if Elden Ring is as good as promised!

Note: This review will contain no spoilersfor Elden Ring.

The Quest for the Great Runes

That is, until your player character returns to restore the fractured land. As a previously exiled warrior known as a Tarnished, you are beckoned to The Lands Between and tasked with retrieving the shards of the Elden Ring. Upon completion of the task, you are set to become Queen Marika’s consort and take your place in history as the new Elden Lord. Your quest will take you from the depths of swamps to the snowy peaks of mountains, with little help to guide you. However, the most courageous and persistent soldiers will discover much grander rewards than a seat at the royal table.

Many of FromSoftware’s previous games have been notably obtuse in their storytelling and design, only offering small pieces of the story and encouraging players to solve the narrative jigsaw. Elden Ring is no exception in that regard, but it’s easily the most straightforward story from the developer yet. While there are vast amounts of rich, well-written lore to dig into, the premise and main plot points are easy enough to understand. It’s important to note that the lore of Elden Ring was co-written by George R.R. Martin (of Game of Thrones fame), so expect some truly wild fantasy mixed with unsettling themes and personable characters.

Living in the Lands Between

The main selling point of Elden Ring is its open-world nature, which is a big change from the often linear games created by FromSoftware. Similar to iconic open-world games like The Elder Scrolls V: Skyrim or The Legend of Zelda: Breath of the Wild, Elden Ring is a game that’s meant to be played with a curious mind, as observant exploration is rewarded more than anything else. After a brief tutorial, you’re dropped into the opening region of Limgrave and let loose to explore. Sites of grace (which function much like bonfires in Dark Souls) occasionally point you in the general direction of a notable location, but it’s mostly up to you to decipher where to go and what to do. You’ll find a more linear experience in the game’s many “legacy” dungeons, but most of your time will be spent riding your spectral horse, Torrent, pursuing anything interesting that catches your eye.

At the start, Elden Ring can be exceptionally overwhelming, as it is easy to get lost and there are tons of things to do. You can only uncover portions of the map by finding map fragments located around the world, so it can be hard to figure out if you’re going in the right direction. However, if you embrace the adventure and soak up the atmosphere, it’s just as easy to spend hours lost in joyful exploration. It’s important to take your time and examine the finer details, as you’ll often find important crafting or quest items tucked away in obscure locations.

What makes exploration in Elden Ring consistently engaging is the world itself, as the Lands Between are ever-shifting in theme, topography, and vibe. You’ll venture through lush forests, treacherous cliffs, murky swamps, and even desolate hellscapes with red-tinted skies. There’s a staggering amount of variety to the map, which never seems to stop expanding as you find new locations, each one full of mystery and intrigue. All sorts of visually evocative enemies lurk in the shadows as well, ranging from skeletal warriors to deadly magicians and a vast assortment of signature FromSoftware abominations. Even the wildlife is out to get you, including giant rats, bears, and bugs, as well as a few other surprises we won’t spoil. You might even run into one of Elden Ring‘s 100+ bosses, each one more fierce and intimidating than the last.

When it comes to combat and battling, Elden Ring will feel familiar to anyone who has tried a FromSoftware game before. Plainly put, it’s really, really hard third-person action with an extra helping of difficulty. That said, Elden Ring is also the most welcoming and accessible game for newcomers to play, as it’s generally more lenient in terms of checkpoints, upgrade, and enemy balancing. There are 10 starting classes to choose from, ranging from the melee-focused Samurai to the mage-like Astrologer, but you’re never tied to one playstyle. You can wield swords, axes, daggers, bows, and fling magic to your heart’s content, with little limitation in terms of class-based restrictions. We recommend that newcomers pick the aforementioned Samurai, as it offers one of the best starting weapons in the game. Regardless of how you play, you should expect to die hundreds of times, as Elden Ring is unapologetic in its difficulty.

There are no traditional quests to complete in Elden Ring, so the only way you can grow more powerful is by collecting runes by defeating enemies. Your purse of runes is never safe, as you lose them all if you die. However, if you are able to make it back to where you died on the next try, you can recover them and keep your pockets fat. Once you’ve collected enough, you can increase your core stats at a site of grace checkpoint, slowly bolstering your character’s strength, endurance, intelligence, faith, and more. New weapons and armor are rarer than you might think, so you’ll often want to upgrade your existing gear instead of swapping for new stuff. This can be done by collecting smithing stones often found in mining tunnels and trading them in at the blacksmith. Weapons can also be outfitted with special moves known as “Ashes of War”, providing a slew of unique attacks that can drastically change your approach in combat.

Elden Ring is a single-player game by design, but you can still team up with your friends to take on bosses or fight in player-vs-player combat via the somewhat convoluted multiplayer system. If you are connected to the online network, you’ll also see ghosts of other players, along with messages that may or may not provide trusty advice. If you prefer to play completely solo, you can simply choose the offline mode, which removes the multiplayer aspects entirely. You can still get some help during tough bosses thanks to new “Ash” summons, which allow you to call for some ghostly assistance in select areas. There are dozens of different Ashes to find, including a pack of ferocious wolves, master swordsmen, and even a giant poisonous jellyfish.

It’s easy to understate just how expansive the world of Elden Ring is. If you take your time and thoroughly explore, there are at least 100 hours of content to enjoy, even if you’re talented enough to progress without dying too often. Apart from the path of the “main quest”, there are dozens of option dungeons to find, including trap-filled catacombs, winding caves, mining tunnels, and more. Each location is often punctuated by a massive boss fight, where you’ll face off against some of the most inventive and impressive enemies FromSoftware has ever created. You’ll also meet with various characters that have personal quest lines to pursue, leading you to hidden areas with secret boss encounters and legendary loot.

While the points-of-interest are cool to find, the overworld is also populated with tons of dynamic events and surprises to catch you off guard. You might be exploring the woods and run into a pair of massive bears or accidentally disturb a sleeping boss when you stumble into its dwelling. Although there are some patches of the map that can feel slightly barren, a surprising majority of it is authored with content that is easy to miss. You might find a mysterious medallion locked away in the basement of an innocuous guard tower or locate a shackled prisoner with world-shattering words of wisdom. Things that seem innocuous at first can drastically alter the game, leading to different endings or a renewed understanding of the narrative.

The Bottom Line on Elden Ring

To be blunt, Elden Ring was worth the hype. It doesn’t matter if you’re a seasoned player of Souls-likes or a newcomer to the scene. The Lands Between is easily one of the most engrossing and immersive game worlds I’ve had the pleasure of exploring, as it is utterly packed with entertaining content and challenging combat encounters. Still, some aspects of the game are less than favorable, including the clunky menus and the needlessly complex multiplayer system. It’s also very, very similar to Dark Souls in moment-to-moment gameplay, so if you didn’t like those games you probably won’t like this one.

Even with the occasional bump in the road, Elden Ring exemplifies the type of narrative experience than can only be achieved in video games, with fantastic combat, visuals, and music to boot. The game deserves every ounce of praise it has received, as it’s easily one of the best games of 2022 and a front runner for the best Souls-like game ever made. If you’re interested in Elden Ring but need that last push to take the leap, here it is. It might not be for everybody, but those who become invested in Elden Ring will find an immensely rewarding and challenging experience that rivals the best that gaming has to offer.

Note: This game was reviewed on an Xbox Series X using a code provided by the publisher.