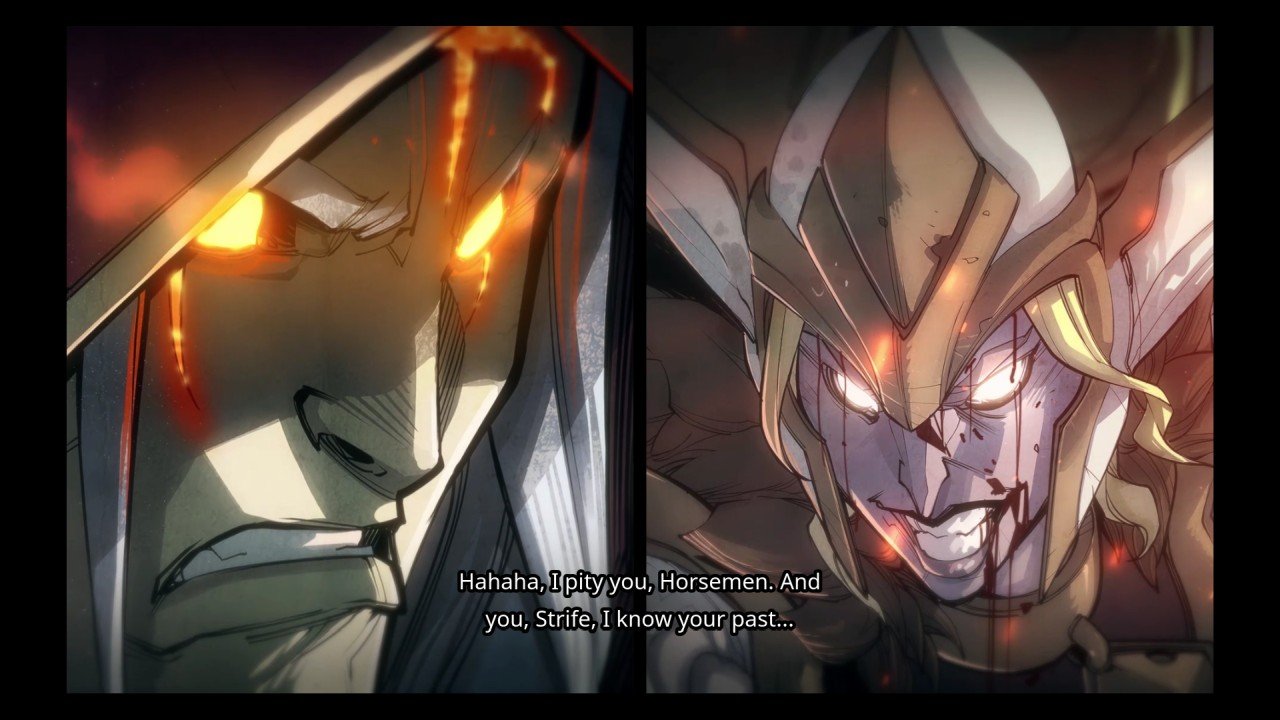 Darksiders Genesis is an isometric hack ‘n slash adventure and the fourth game in the Darksiders series. Developed by Airship Syndicate, this Darksiders title offers a unique gameplay experience and introduces the last of the Four Horsemen of the Apocalypse, Strife. By combining combat mechanics from previous games in the series with a new perspective and gameplay flow, Darksiders Genesis provides an action-experience that is both familiar and new. To that point, the changes made to the expected formula in Darksiders 3 were met with a mixed critical response, so is does this follow-up deliver the game that fans want to play? Let’s find out if Darksiders Genesis is still worthy of the Darksiders brand.

Darksiders Genesis is a prequel to the original Darksiders, taking place before the Seventh Seal is broken and the apocalypse is unleashed on humanity. In the opening text, we learn of the existence of the Four Horsemen of the Apocalypse: War, Death, Fury, and Strife. These powerful beings are the spawn of angels and demons, known as Nephilim. Commanded by their leaders, a group known as the Charred Council, the Four Horsemen are ordered to eliminate the rest of the Nephilim, resulting in a bloody and terrible battle on their homeworld.

At the start of the game, two of the Horsemen, War and Strife, are given a new task by the Charred Council. Recently, word has been circulating that Lucifer, the evil-as-can-be demon lord, has been attempting to upset the Balance of the universe. In his effort, Lucifer has granted excessive power to various high-ranking demons in Hell, tilting the scales of Balance towards the unholy. Armed with this information (and a variety of weapons and superpowers), War and Strife set out to hunt down these demon generals and uncover Lucifer’s true motivations.

Although the world-building and atmosphere is admirable, the overall plot in Darksiders Genesis is hardly the focus. Plot points mostly exist to shuffle War and Strife to the next location, usually to fetch an item or hunt down a particular character. Apart from a few comedic conversations between the two Horsemen and a handful of cutscenes, there’s not too much raw narrative to speak of. Like past Darksiders games, the story is serviceable but won’t be a standout among other action games.

In Darksiders Genesis, you can tackle the adventure in either solo or with a friend, utilizing both local and online multiplayer. Each character plays differently, although both are able to equip various abilities and upgrades as you discover them. War controls very similarly to how he does in the original Darksiders, with most of the same abilities and moves. Slicing with his giant sword, War can do some pretty hefty damage, as well as dealing out elemental damage with a handful of special “Wrath” moves. Strife’s main damage-dealers are his pistols, which have various ammo-types for strategic options. Strife can also fend off enemies with melee abilities, though his firearms are often the best thing to use in a pinch.

In single-player, you’ll control both War and Strife, switching between them at any point with the press of a button. If you opt for multiplayer, each player will control one of the two Horsemen, although you can still swap characters if you feel like changing things up. Local and online cooperative play are both supported, which is a nice touch and appreciated by those players who still play together on the couch. Generally speaking, action games are usually more fun with a friend, so Darksiders Genesis has a leg up in that aspect.

Back in the Saddle Again

The level design in Darksiders Genesis is an interesting mixture of expected hack ‘n slash hallways and large maps with plenty of hidden goodies to find. You can travel on foot or on horseback, simply summoning your supernatural mount in a snap. If you’ve played the first or second Darksiders games, the formula will feel very familiar, just played from a different perspective. Levels are packed with devilish and dangerous foes, some simple to slay and others quite formidable. You’ll occasionally complete an environmental puzzle or platforming section, aided by your various character upgrades and abilities that unlock as you progress. There’s a big emphasis on exploring the nooks and crannies of each level, uncovering various treasure chests and secret doors that provide souls and upgrades.

Unfortunately, Genesis has some frustrating issues that kept popping up during my playthrough, adding unneeded frustration. The larger size of the levels can lead to some moments of confusion and lack of direction, wondering if you missed a vital trigger or enemy. Most of the time you’ll get back on track after some exploring, but in a few instances, I encountered the game not loading properly. There were also a handful of audio issues, including voice-lines not playing and in-level music stopping abruptly. Although most of the problems I encountered were simple enough to fix, they were frequent enough to leave a feeling of uneven polish.

Between the story chapters, you’ll hop into the Void, the realm of the decaying merchant Vulgrim. Here, you can spend your earned souls and collected coins to unlock numerous stat-boosting upgrades from the supernatural salesman. After some story progress, you’ll also unlock Dis, a she-demon who provides new combos and attacks for War and Strife in exchange for currency. When visiting the Void you’ll often chat with Vulgrim or other characters, adding a bit of narrative context to the next mission. The process of upgrading your characters and buying new attacks is straightforward and easy, making the Void a nice place to rest before the next battle.

My Soul to Take

One of the biggest aspects of Genesis’ leveling mechanics is the Creature Core system. As you play through each of the game’s seventeen chapters, you’ll slay a variety of demon creatures, each with the potential of dropping a precious core. Every creature has its own core, and each one provides a unique stat boost or ability bonus. Puny, common enemies will drop minor cores, which provide small but worthwhile bonuses, while bosses and elite enemies drop valuable major cores. Cores are equipped in a web-like system that rewards smart placement, as connecting multiple cores of the same type (attack, wrath, or health) adds even more bonuses. While this sounds a bit complicated, it’s quite innovative and fun to experiment with.

Individual cores can also be leveled up as you find duplicates, so grinding out certain enemy kills might be smart depending on your core load-out. If you don’t feel like replaying previous story chapters, you can gain a bunch of creature cores by fighting in Arenas. You can access Arenas between story chapters while chilling in the Void, hopping in for some quick kills. There are over 20 unique arena challenges, each one pitting you against 10 waves of enemies. Overall, the Arena is a fun and mindless mode that adds several hours of more fun and provides an additional way to gain resources.

The Bottom Line on Darksiders Genesis

While the overall experience is far more repetitive than your standard Darksiders adventure, Darksiders Genesis is still an enjoyable romp through hellish planes of demonic hordes. Whether playing solo or with a friend, there’ are dozens of hours of content to experience. 16 lengthy story missions, a wave-based arena mode, and plenty of hidden collectibles and side quests will keep you busy for quite some time. During those hours you may experience some frustrating glitches, annoying camera obstructions due to the isometric view, and a middling story, but it’s mostly worth it in the long run.

Longtime fans of the Darksiders franchise might be disappointed or underwhelmed by Genesis in comparison to the first three games, but it’s still a hack ‘n slash with some surprising depth. Local and online co-op play makes it easy to pull a friend into your demon-slaying journey, which always improves the hectic nature of action games. While I encountered my fair share of annoyances, Darksiders Genesis managed to hold my attention and keep me engaged, even if I’m not rushing back to uncover the rest of its secrets.