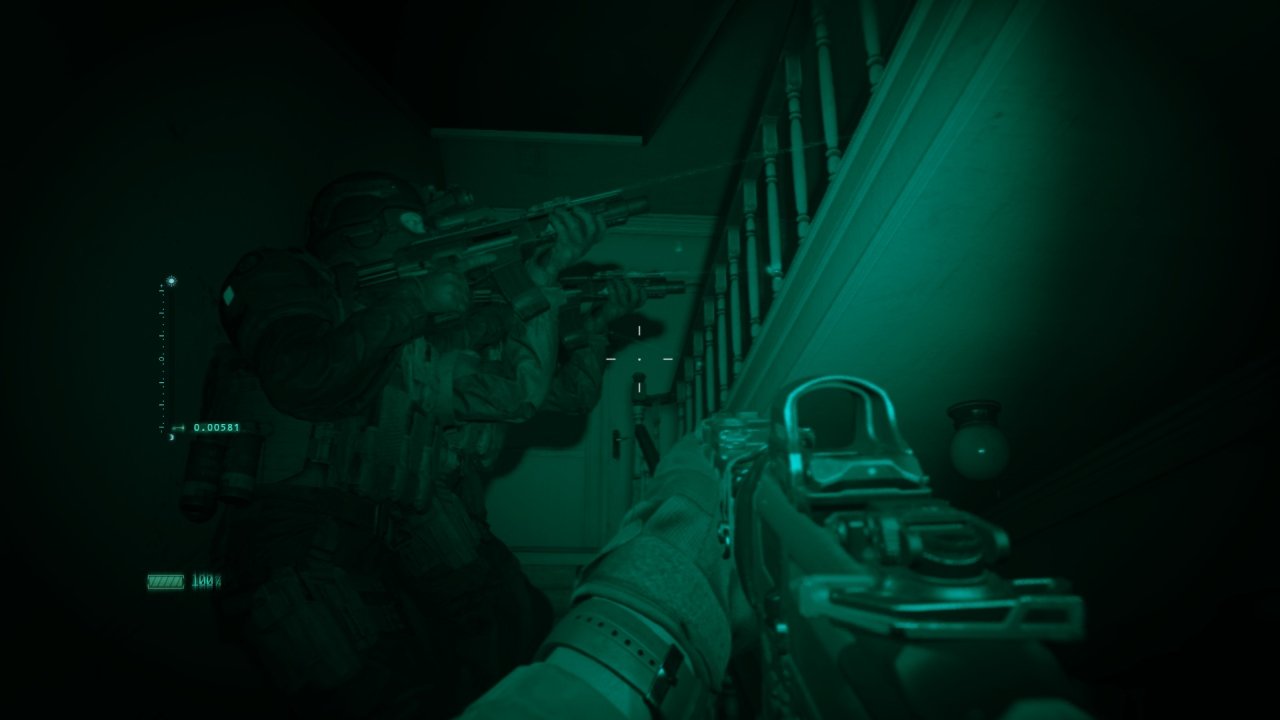 Call of Duty: Modern Warfare Review – Back to the Present

The Wolf of Urzikstan

In Call of Duty: Modern Warfare‘s campaign, the story follows a conflict in the fictional Middle Eastern country of Urzikstan, where an emerging terrorist cell known as Al Qatala continues to commit war crimes. Playing as both a United States Marine named Alex and a British SAS soldier named Kyle Garrick, you’ll plunge deep into the darker sides of war and terrorism. The story flips back and forth between Alex and Kyle’s perspective, with Alex fighting alongside rebel fighters in Urzikstan and Kyle participating in tactical missions abroad.

The story touches on some exceptionally unsettling aspects of warfare, including chemical weapons, civilians caught in the crossfire, and the use of torture and terrorism. It’s a story that falters in the bigger picture, but succeeds in providing arresting and riveting set-piece moments.

While the story itself isn’t as effective as the previous Call of Duty: Modern Warfare trilogy, the journey is packed with memorable sequences from beginning to end. There’s a good mixture of chaotic gunfights, suspenseful stealth, and fast-paced gameplay. The shooting feels great and the variety of the campaign ensures you’ll get your hands on most of the available arsenal. The visuals are remarkably realistic at times, verging on the edge of the uncanny valley. Depending on the difficulty setting chosen the campaign will take you anywhere from 5 – 8 hours to complete, which feels a bit short. The campaign still feels satisfying and worthwhile though, ending up as one of the most exciting Call of Duty campaign modes in years.

As expected, Call of Duty: Modern Warfare includes both online and local competitive multiplayer, with a variety of modes and maps. As an added bonus, cross-console play is now a standard feature, allowing players to party up with friends regardless of their platform of choice. You will need to link your Activision account in order to do though, so be prepared to sign-up if you haven’t yet. As always, there’s a solid mixture of both deathmatch and objective-based game modes. Gameplay is visceral and demands quick reflexes, resulting in a slightly addictive and satisfying rush of adrenaline. These include: Team Deathmatch, Kill Confirmed, Search and Destroy, Domination, Headquarters, Free-for-All, Hardpoint, Gunfight, and Cyber Attack. Most of these modes are Call of Duty staples, but Cyber Attack and Gunfight stand out as new additions.

Cyber Attack plays similarly to Search and Destroy; there’s a bomb to pick up, and teams must try and plant the bomb at the opposing team’s base. There’s no respawning in Cyber Attack, although teammates can revive other downed teammates. It’s a decently quick-paced game mode, where strategy still counts. I prefer Cyber Attack over the more traditional Search and Destroy, but your tastes may differ. Gunfight is a wholly new Call of Duty multiplayer mode, pitting two teams of two against each other in quick multi-round firefights. In Gunfight your weapons are chosen for you, adding a random element to shake up strategy. It’s a quick-paced mode that’s good for short play sessions, as it can grow a bit repetitive after prolonged play.

The overhauled Ground War mode provides refreshing large-scale 32 vs 32 battles. With vehicles, multiple spawn points, and huge open maps, Ground War can often feel like a Call of Duty spin on the Battlefield franchise. Unfortunately, some vehicles are incredibly overpowered, resulting in frustrating gameplay for anyone left out in the open. There are two maps included at launch; one that takes place in a downtown area of a city and another in a more rural industrial site. The rural map can be exceptionally frustrating to play on due to the power of vehicles, leading to lengthy and annoying one-sided matches. Generally speaking, Ground War is a mixed bag, but I appreciate the attempt to create an experience that bridges the gap between Call of Duty and Battlefield.

Unfortunately, the competitive multiplayer has its fair share of problems. Players who enjoy the fast-paced nature of previous Call of Duty titles like Call of Duty: Black Ops IV might find the more intricate map designs frustrating. With so many windows, doors, and corners for enemies to camp in, you should expect to get shot in the back at least a few times per round. This slows the overall pacing of the game, as speedy players are often punished with a quick death.

Respawn points are also an obvious problem, as it’s far too easy for one team to trap the opponent at their spawn and get easy kills. It’s a problem that can happen occasionally in any competitive FPS, but the frequency of spawn-camping problems in Modern Warfare is far too high to pass it off as coincidence. This issue will better or worsen depending on the mode and map you’re playing on, but it’s a consistent problem that can cause frustration. Hopefully, this will be addressed in time, as the respawn problems will only become worse as more players learn how to exploit them.

The cooperative Spec Ops mode has taken on a lot of forms in past Call of Duty games. At its peak, it was a separate set of cooperative-only missions with a variety of objectives and rankings to obtain. At its most middling, Spec Ops has been a simple wave-based survival mode. This version of Spec Ops is a combination of both of those experiences, reformatted into a more challenging and replayable structure.

The main focus in Spec Ops are the Operations; challenging open-ended missions designed for squads of four players. There are four different operations at launch, and each operation gives your team a list of objectives to complete. The maps are large and the enemies are difficult, encouraging players to stick together and fight with a strategic touch. You can revive your teammates if they run out of health, but if the entire squad dies you’ll have to restart the entire operation.

While this might sound like a satisfying challenge, a lot of the objectives feel repetitive or uninspired, and the enemy difficulty feels more cheap than challenging. While there is some fun to be had here for serious gaming groups, most of the Operations lack depth. While it’s cool to see the Call of Duty formula applied in a more tactical manner, the Operations are a downgrade from the polished mini-missions we’ve seen in the series’ past.

The Bottom Line on Call of Duty: Modern Warfare

While it doesn’t exactly re-invent the Call of Duty brand, Call of Duty: Modern Warfare provides an exciting experience with some interesting new ideas. The single-player campaign is one of the franchises’ best, providing countless memorable moments and stunning visuals. While occasionally imbalanced and frustrating, both the competitive and cooperative multiplayer offerings are great inclusions. The competitive multiplayer will likely keep fans invested for dozens of hours, with a slew of unlockable items and challenges to complete.

Call of Duty: Modern Warfare is a well-rounded FPS package that stands out in a variety of ways, but occasionally feels weighed down by its own ambition. For longtime fans of the Call of Duty series, Modern Warfare is a step in the right direction and a sign that there’s plenty of kick left in the franchise. It’s a good place for newcomers to jump in as well, due to the pure variety of gameplay across all included modes. Overall, Call of Duty: Modern Warfare lives up to its name and continues the tradition of delivering intense blockbuster action quite unlike any other military FPS franchise.