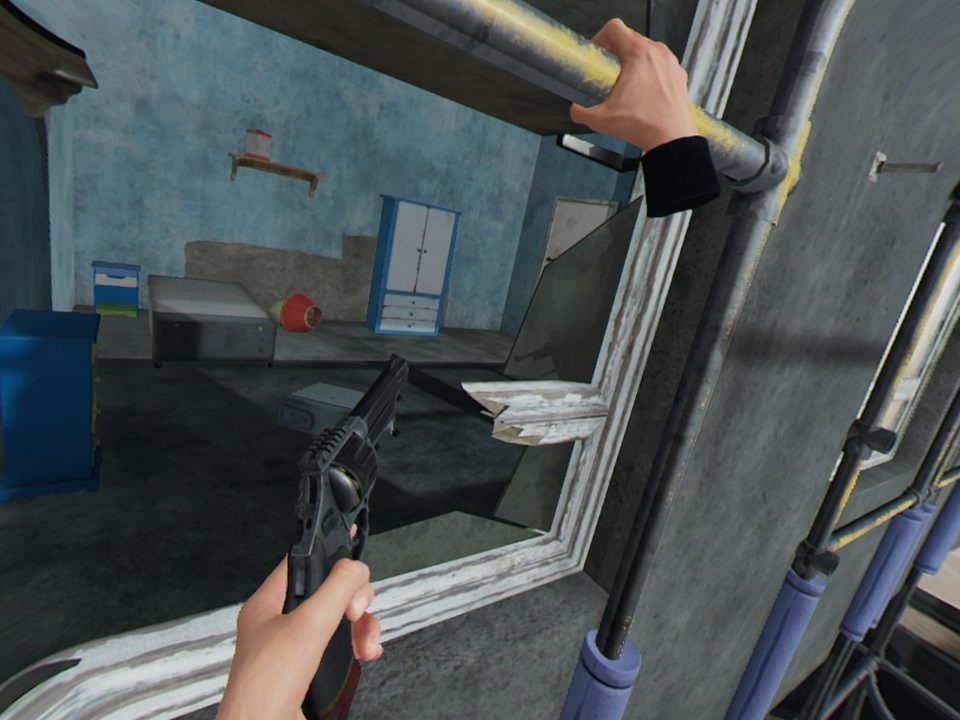 Blood & Truth is a first person shooter exclusive to the PSVR, and it is developed by SIE London Studio. It is very similar in style to The London Heist, London Studio’s addition to the PSVR launch software, VR Worlds. It combines a classic tale of revenge with modern day organized crime, creating an experience that feels like a blockbuster action film in which you play the starting role. There are plenty of engaging gunfights, intense chases, and epic set pieces. As a full price VR title, does Blood & Truth deliver enough content to justify the purchase? Well, that all depends on your taste for action and chaos.

Blood & Truth tells the story of the Marks family, a wealthy family with obvious ties to the world of organized crime. After the father of the Marks family dies of a heart attack, a pair of villainous crime bosses make their move. You play as Ryan Marks, an ex-Army soldier who is well-trained in espionage and gun handling. On the day of your father’s funeral, Tony Sparks and his brother attempt to overtake your family business, which sets in motion a series of predictable but nonetheless explosive events. As violence begets more violence, Ryan must defend his family the only way he knows how; with loads of bullets.

As a narrative, Blood & Truth has a few surprises, but it’s a story you’ve seen plenty of times before. As one of the three Marks family siblings, you’ll tear through Spark’s businesses and hideouts, always one step behind. The fairly straightforward plot opens up to the expected revelations, including secret organizations, double-agents, and other mysterious circumstances. Lengthy dialogue scenes fill out exposition in between the more action-focused missions, but these narrative sequences can falter the pace of the game. While the writing is serviceable and the characters are believable, I couldn’t help but grow impatient as I waited for the next opportunity to dive into the action. Despite being a by-the-books story, Blood & Truth still manages to be effective, mostly due to the fantastic immersion that comes from a high quality VR experience.

Out with a Bang

Gunplay in Blood & Truth is straightforward and easy to control. It’s reminiscent of classic arcade on-rails shooters, due to the limited movement you have as a player. You’ll simply walk from point to point, using various furnishings and obstacles as cover. You can occasionally strafe between two close points, especially when you make a stand against respawning enemies. Reloading your handy pistols is easy, thanks to an ammo pouch on your chest with nearly unlimited ammo. This pouch will always contain the proper ammo needed for the gun you are wielding, removing the need to track your bullets closely. There’s also a handy “precision aim” mode, which is little more than a controllable slow-motion ability. However, it provides a great way to slow down the action when it gets too intense, allowing you to quickly reload and execute a flurry of shots.

Pistols aren’t the only weapons you’ll utilize in your quest for revenge, although the early hours of Blood & Truth heavily feature sidearm over assault rifles. You can eventually find and holster shotguns, assault rifles, grenades, and more. Grenade pins can be pulled out with your teeth, rifles can be dual-wielded with SMGs, and everything feels generally badass. Guns feel accurate and shooting is precise, which can make occasional tracking issues bothersome. However, I was consistently entertained by the chaotic combat scenarios that Blood & Truth presents.

More than a Mercenary

Ryan Marks is more than a simple gunslinger, with the ability to pick locks, disarm surveillance cameras, and even double as a DJ. Blood & Truth fills the moments between combat craziness with these smaller interactions, which keeps things fresh and helps delay the feeling of repetition. In fact, some of the coolest stuff in Blood & Truth comes from its more espionage-centric gameplay. Lock picking feels fun and responsive, as do the other sillier interactions that I won’t spoil here.

Generally speaking, Blood & Truth tries to provide an experience that is part shooter, part crime thriller, and part humorous virtual reality adventure. It doesn’t take itself too seriously, with the exception of the standard revenge plot. When you’re not jumping out of a window or blasting enemies in a high-speed car chase, the game fills the experience with some notable scenes and locations. From an art gallery to various flashback sequences, Blood & Truth finds some neat ways to introduce fun locations with some really cool interactivity. Although the majority of the experience entails executing every enemy in your line of sight, there are still some very inventive sequences that stand out from the rest.

There and Back Again

Besides the roughly six hour main campaign, Blood & Truth lacks the kind of replayability you might expect from an arcade-like shooter. While you can replay missions to scour for various collectibles, you are unable to restart a new game without deleting your save data. This is an issue I assume will be addressed, but it’s an issue nonetheless. There are still plenty of hidden goodies to find though, including collectible statues and hidden target marks to shoot.

As you find these hidden collectibles, you’ll earn stars. As you amass more stars, you’ll unlock new mods and paints for your various weapons. You can equip these mods at your safehouse shooting range, adjusting your loadouts for the mission at hand. Silencers can be added for a stealth elements, extended magazines help keep the lead pumping, and various optical sights add accuracy to your shot. There are additional upgrades such as the grenade launcher, but these require some serious collectible hunting. As cool as the mods and paints jobs are, I had little trouble completing the game with only a few basic accessories. There are definitely some tricky fights where weapon mods can help, but overall, they aren’t as important as you might think.

The Bottom Line on Blood & Truth

Blood & Truth delivers an exciting action experience that is one-of-a-kind on the PSVR. It can be predictable and suffers from some stilted pacing, but the majority of the game is tons of fun. The immersion you get out of virtual reality is used to great effect here, inserting the player into scenarios that have them feeling like a true action movie hero.

The gunplay is addictive and fun, and the quick reloading and arcade-like gameplay makes it easy to continue playing. The lack of replayability makes it tough to recommend at full price, but given the higher cost that VR games are known for, Blood & Truth has an approachable mid-tier price. It might not be an entirely fresh or innovative story, but it’s still one that is plenty of fun to experience. If you find yourself craving a bit of ultra-violence and Hollywood style action, Blood & Truth will more than satiate those needs.