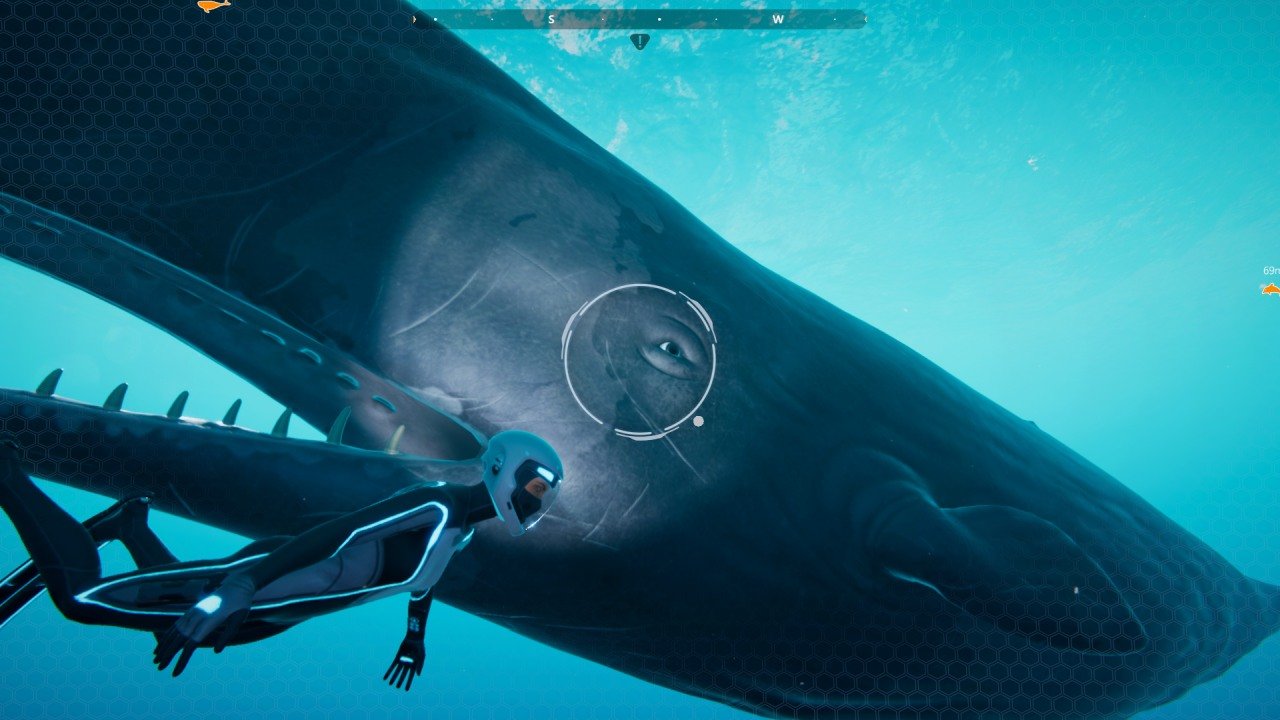 Beyond Blue is an aquatic third-person adventure, developed and published by E-Line Media. In the game, you play as Mirai, a marine biologist and whale tracker. With your futuristic scanning tool in hand, you’ll take the plunge into oceans around the world, researching and tracking various animals. While there’s a good deal of storytelling and narrative to be had, Beyond Blue is also highly informative, with a focus on factual information over fantasy. That said, Beyond Blue is far from what you might consider “edutainment”, feeling more like a game than a learning tool. The mysteries of the ocean deep are more than enough to get us intrigued, but does Beyond Blue provide an interesting enough gameplay experience to warrant the adventure? While other diving-focused games like Abzu have managed to succeed, a completely-underwater game might be a tough sell for some. Let’s take a look at Beyond Blue and see if it’s a thrilling ride through the ocean or a damp dishrag of disappointment.

Beyond Blue takes place in the not-too-far-off future, and focuses on a research team of marine biologists working for the ocean exploration company, OceanX. You play as Mirai, a young diver with a soft spot for whales and the general vibe of the ocean. Although you’ll be diving alone, communication support comes from a few of your teammates, including Andre, a disgruntled turtle-lover, and Irina, a straightforward and blunt woman who runs self-funded research projects. What starts off as a normal diving expedition quickly becomes more dangerous, as the group begins to notice abnormal readings from the deep. Spread across multiple days of diving, you’ll slowly uncover the truth behind the unknown disturbance that lies below.

For the most part, the narrative in Beyond Blue is a surprisingly refreshing and grounded story. The characters feel honest, the voice-acting is well done, and none of the sub-plots feel forced. Between story missions, you’re able to take a break in your submarine, fielding phone-calls to family members and your team. These small narrative breaks add quite a bit to the gameplay experience, providing ample motivation to continue. The $20 price tag might make you expect a silly or underwhelming story, but Beyond Blue manages to buck the trend by providing an engaging and interesting story. While the overall narrative ultimately won’t win any awards, it’s still a great addition that helps strengthen the total package.

Scanning Through the Blue

When you’re not chatting it up with your sea-loving cohorts, you’ll spend your time swimming through the open ocean, looking for fish and other interesting environmental oddities. Each story mission takes place in a small, open area, in which you can swim around unrestricted. Objectives are often incredibly straightforward, tasking you with following waypoints to scan certain animals, pick up objects off the seafloor, and recover various samples. There’s only the occasional spot of frustration, as most of the exploration is generally pretty simple.

The data you uncover is often grounded in fact, evidenced by the game’s inclusion of material from the BBC program Blue Planet. It’s a consistently relaxing experience, which is reinforced by the soothing ambient music and realistic sounds of the ocean. If you’re looking for a fast-paced, crazy water-based adventure with giant sea monsters, this is the exact opposite of that. Instead, Beyond Blue continuously asks you to apply the brakes and enjoy the sights and sounds.

While this is a nice sentiment, the gameplay is ultimately pretty repetitive. Don’t get me wrong, I found it plenty enjoyable to swim around, scan animals, and occasionally encounter something unexpected and exciting. Unfortunately, that’s about the extent of the entire game. There are a few tools you get to use during your research, but there’s no progression system or upgrades to speak of.

As you scan various lifeforms, you’ll be able to view them back on the submarine in the model viewer, which provides some factual data as well as a close-up view of the specimen. You’ll also unlock short, documentary-style “Insight” videos, which teach you more about the real-life issues that dominate marine life in modern times. Additionally, there’s a finite number of fish to scan, so if you feel compelled, you can spend time swimming around and completely clear each area. You’ll unlock a few achievements along the way, but there’s no huge reward for doing so.

Generally speaking, the gameplay in Beyond Blue is what you make of it. As long as you’re not deathly afraid of the ocean (which you totally should be, in my opinion), Beyond Blue provides a laid back and informative take on the beautiful world below the water. It’s a quaint and enjoyable little game, but it’s unfortunately plagued with annoying technical issues. The draw distance leaves a lot to be desired, making most of the levels look foggy. The frame-rate is often subject to wild dips and stutters, especially as your camera passes especially populated areas.

The visual glitches and technical instability is the worst when you’re hanging out in your sub between levels. Visual effects can cause odd texture blurring, Mirai’s character model occasionally gets stuck in her chair, and there’s a persistent visual glitch that occupies the bottom-left hand corner of the screen. Unless the frame-rate problems are a deal-breaker for you, none of these technical issues are hugely detrimental to the gameplay experience. Instead, they signify a lack of polish and consistently remind you that Beyond Blue is a budget-tier game. This is especially disappointing when you consider how solid the rest of the game is. These problems will likely vary depending on what system you play the game on, but they pop up often enough to become an annoyance.

The Bottom Line on Beyond Blue

Overall, Beyond Blue is a soothing adventure that should only take you a handful of hours to finish. While the story is of decent quality and the core gameplay mechanics are passable, the game often ends up feeling repetitive and occasionally boring. Constant frame-rate problems and other technical hiccups harm the experience more than enough to make an impact.

At $20, Beyond Blue feels a tab bit overpriced, especially when you consider the lack of replayability and variety of content. If you’re looking for a game that will help you calm down after a long day of work, Beyond Blue will help you get there. If you’re expecting some sort of sci-fi, action-adventure that takes place in the sea, this simply isn’t it. As long as you check your expectations beforehand, Beyond Blue provides a passable experience, even though it feels hastily made at times.