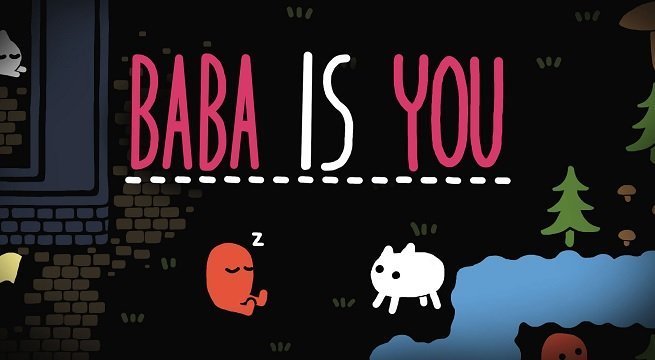 Baba Is You is, hands down, one of the most thought-provoking games I’ve ever played. If you’ve already been persuaded to play Baba Is You, and you’re simply reading this review in order to learn more about the game, may I recommend dipping out now. If you’re sold on the concept and enjoy the charming, squiggly aesthetic, pick it up today on the eShop and start playing. $15 is a negligible risk compared to the dozens of hours of delight and surprise that await the player who goes in more-or-less blind.

Baba Is You is what I would describe as a puzzle meta-game. Imagine a puzzle that places the player in a room, surrounded by walls, separated from a glittering flag by a dividing line of rocks. The player is a cat; the rocks can be pushed; the walls are hard barriers; touching the flag results in a win. Your objective is clear: you need to push the rocks to create an opening, so that you can cross the room and touch the flag.

Now, imagine that the programmer of this puzzle game laid out all of these definitions and rules in plain text blocks for the player to see. Beyond the cat, beyond the rocks, and beyond the flag and walls you’d see text blocks that say things like: Cat Is You. Wall Is Stop. Rock Is Push. Flag Is Win.

Now imagine that those words are all within your reach, and rearrangeable. What would happen if you pushed the word “Stop” out of the rule-phrase “Wall Is Stop.” Now you can walk around the rocks, through the outer walls, to get to the flag. What if you decided to play with the word “Win?” Push some text blocks around to make the phrase “Rock Is Win,” and now your objective is much easier; your barrier has now become your objective.

If you’ve lucidly followed me through this thought experiment, then you have a firm grasp on what makes Baba Is You so interesting. It’s a puzzle game that encourages players to reshape the rules. The environment, the obstacles, the dangers, the objectives — players themselves — are all open to manipulation and redefinition.

Baba Is You is a blooming kaleidoscope of esoteric delights. Every time you think that you have a complete grasp on the mechanics and how everything “works,” a stage will come along and introduce a new word, or challenge, that forces you to completely change your thinking. It insists on making a complete mockery of player assumptions, and rewards creativity in the most gratifying ways. 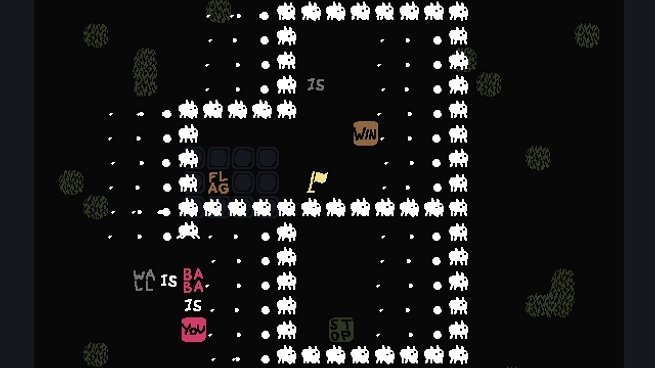 I remember one stage that spawned me next to a key. On the other side of the stage sat a closed, isolated box with the objective flag inside. [Key] Is [Drag] was one of the rule-phrases, so I knew that I was meant to figure out how to drag the key over to that box – but I never did. After several rounds of trial and error, I grew frustrated and started thinking more wiggly. I ended up transforming an NPC on the other side of the stage into a key, and programming that key to walk itself into the box, revealing the flag.

I don’t think that’s how the level was “meant” to be played, but that’s the point. The rules are meant to be reshaped. I was given a set of tools, and encouraged to manipulate them however I wanted to in order to solve the puzzle. The end result is that players are often forced to come up with bizarre,  rickety, jimmied solutions – or else incredibly elaborate solutions – of their own, and it always makes the player feel proud, and intelligent.

The player experience is a pendulum that ceaselessly ticks and tocks between sentiments of “this is impossible,” and “wow, I’m a genius.” Solutions always seem to come suddenly and unexpectedly, triggering a rush of dopamine stimulation that you want to experience again and again. Not since The Witness or the original Portal have I been so addicted to solving puzzles in a game.

You may find that Baba Is You is the perfect game to play with the non-gamer in your life. As a lifelong gamer, Baba Is You has completely broken my trained sensibilities. I never realized how rigid I am in my compartmentalization. My ability to quickly define obstacles, rules, and objectives is what makes me great at most games, but that skillset is no boon, here. In fact, I found that my wife, who is practically incapable of navigating to the end of a stage in Super Mario World, is much quicker to see possible exploits or alternative solutions for any given puzzle in Baba Is You. 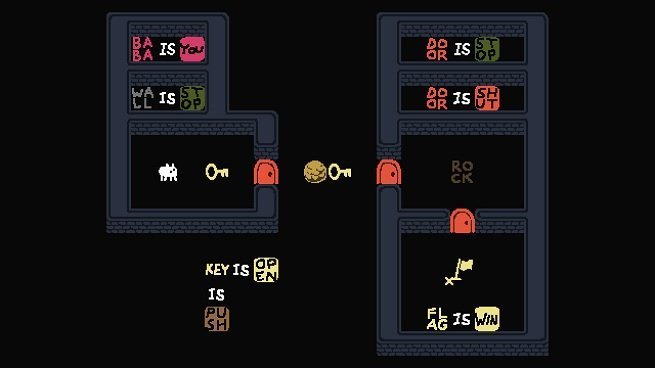 Feel free to pass the left JoyCon (or entire controller) to a loved one. All they have to do is move the stick. You can click the undo button at any time to walk back your movements and actions, so there is zero risk in trying multiple approaches to a stage. Look at the rule-phrases together, see what can and cannot be changed, brainstorm a plan of attack, and have fun pushing the world around.

I’ve been playing video games for 30 years, so at times I feel like I’ve seen it all. Baba Is You surprised me. It truly perplexed and bamboozled me, and for people like me and gamers in my circle, I can think of no higher praise than that. So many modern puzzle games indulge a kind of synthetic difficulty that wears you down, but Baba Is You feels organic and inspired. [You] Play [BabaIsYou] and [BabaIsYou] Plays [You].

Please don’t miss out on this game, and please don’t wait for a sale. You’re going to get much more than what you pay for, and Hempuli is donating 10% of the profits generated by sales to charity. It’s also fun. It’s really, really fun.