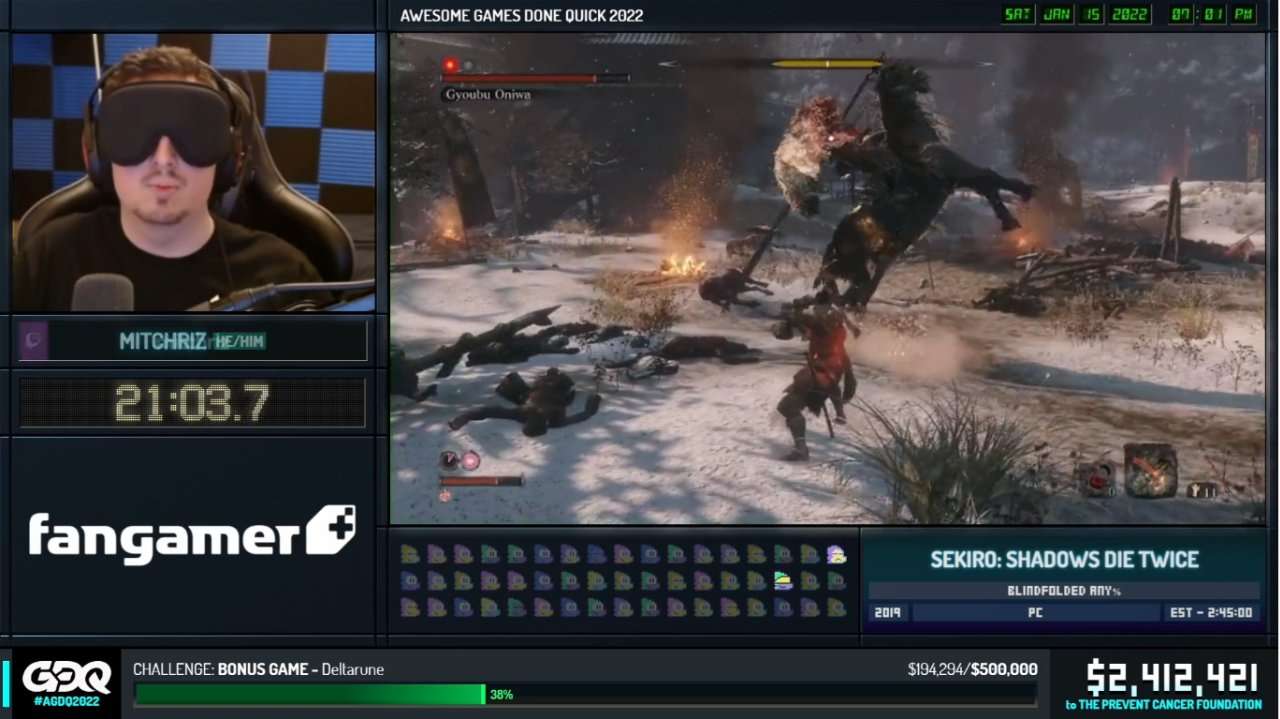 Awesome Games Done Quick 2022 has come to an end, closing out another wildly successful speedrun marathon to raise money for charity. The unofficial theme of the marathon was breaking records, with multiple world records set across the week at a steady pace. Capping off the final day in style, AGDQ 2022 broke their all-time donation record, earning over $3 million for the Prevent Cancer Foundation. AGDQ 2022 day seven was packed with a healthy variety of speedruns, ranging from mods of retro games to blindfolded runs of ultra-challenging modern titles. It was really hard to make cuts, but we’ve managed to whip up a list of our favorite speedruns of AGDQ 2022 day seven.

Now that the marathon has concluded, you can view replays of every speedrun by visiting Games Done Quick’s Twitch channel or their YouTube channel. We managed to skim down our list for the sake of brevity, but that came at the cost of excluding some truly amazing showcases. Almost every single speedrun of AGDQ 2022 day seven was a blast, so we recommend using our suggestions as a place to dive in to the whole marathon’s offerings. We weren’t able to catch every speedrun of the day, so this is by no means a definitive list. Simply put, these are some of the speedruns we had a blast watching on the final day of this record-breaking AGDQ marathon!

Next to Marvel’s Spider-Man on the PlayStation 4, Spider-Man 2 is often considered the best video game based on the web-swinging hero, so it was thrilling to see runner Slyfincleton blast through this iconic adaptation in just under an hour. This run filled us with immense nostalgia, while the impressive gameplay from Slyfincleton kept us engaged the entire time. Spider-Man 2 is all about web-swinging with as much speed as possible, ping-ponging around New York fast enough to earn a serious case of whiplash. Optimized combat and quick-kill boss strategies spice up this retro Xbox run, making it one of our favorites of AGDQ 2022 day seven.

Although it has no relation to the iconic Tetris franchise (despite its name), Tetris Attack is still a wonderfully colorful and addictive puzzle game, which saw a fantastic speedrun at AGDQ 2022 day seven. Running the game’s VS mode on the secret Very Hard difficulty, runner FFR Pro 21 faced off against top-tier AI opponents and put them to shame. There aren’t any glitches or tricks in this run; FFR PR 21 dominates the competition with good old fashioned skill, quickly shifting the colored blocks and pulling off long clear combo-chains. Watching games played quick is satisfying, but this Tetris Attack speedrun was supremely cathartic and one of the best speedruns of AGDQ 2022 day seven.

In this “All Unique Weapons” speedrun of Fallout: New Vegas, runner BananaPegasus was tasked with searching across the post-apocalyptic landscape and recovering 40 unique weapons before completing the game. Luckily, there are a slew of glitches that help the runner accomplish this, including quick-save exploits, wall-clips, menu glitches, and more. While this speedrun route doesn’t follow the main quest line, BananaPegasus still had to complete a fair amount of content, albeit with some significant exploits. Throughout the run, BananaPegasus offers informative and engaging commentary while also providing fun facts about the game and its development, making this Fallout: New Vegas run one of the best speedruns of AGDQ 2022 day seven.

Runner Chronos_R helped add a bit of classic FPS speedrunning on AGDQ 2022 with this run of Halo: Combat Evolved on Legendary difficulty. Widely recognized as being one of the hardest Halo campaigns of the bunch. Chronos_R struggled from time to time with the high damage dealing enemies, but gained the upper hand through a variety of glitches. Right from the start of the run, Chronos_R hops out of bounds, taking advantage of the new engine in the remastered PC port, skipping past large sections and teleporting across the stage. While out-of-bounds tricks are used somewhat commonly, Chronos_R still has to contend with tough alien baddies, adding a good element of action and randomness to the fun. We had a great time watching Chronos_R battle across the galaxy as Master Chief, pulling off crazy glitches and taking on the Covenant with skill and speed.

The Legend of Zelda: A Link to the Past (All Bosses, No Exploration Glitch) by hotarubi_ta

If you enjoy speedruns that showcase lots of glitches that break the game beyond recognition, this “All Bosses, No Exploration” category run of The Legend of Zelda: A Link to the Past will be right up your alley. Performed by the legendary runner hotarubi, this speedrun combines a slew of glitches, ranging from pixel-perfect skips to screen-wraps and more. In order to complete the run, hotarubi must defeat all the unique bosses in the game before challenging the final boss and clearing the ending. To accomplish this, hotarubi uses some seriously disruptive glitches, including a technique known as misslotting, which forces the game to load data incorrectly, creating all sorts of opportunities for exploits. This results in a truly chaotic playfield, where hotarubi continues to pull off even more glitches, busting the game wide open. Luckily, these immensely complicated tricks are described with ease by the commentator, who breaks things down well for the casual viewer. As big fans of Zelda, Super Nintendo speedruns, and mind-bending glitches, this was easily one of our favorite speedruns of AGDQ 2022 day seven.

There have been many speedrun races at AGDQ 2022, but this race of Tetris: The Grand Master pushes things to the next level, tasking the runners with achieving the notoriously tough “Grand Master” rank. To make things even more challenging, the game is set to 20G difficulty, which makes the blocks fall instantaneously. With no ability to hold a piece and a limited preview of the pieces to come, achieving this feat requires an incredible reaction time, confident improvisation, and the ability to stay cool under pressure. To say the task at hand was hard would be a massive under-sell. By the end of the race, only one runner was able to sneak out with a victory while the rest crumbled under the weight of the challenge. Coming it at under 10 minutes, this short but competitive race of Tetris: The Grand Master was one of the best speedruns of AGDQ 2022 day seven.

Over the past few years, blindfolded speedruns have become increasingly more popular, pushing speedrunners to the next level of difficulty. While any blindfolded speedrun is an immense achievement on its own, this “Any%” blindfolded run of Sekiro: Shadows Die Twice by mitchriz displays absolute god-tier gaming. This a speedrun that ironically needs to be seen to be believed, as mitchriz utilizes tons of genius movement techniques to topple bosses and enemies that many would struggle to defeat with their eyes wide open. Not only does mitchriz achieve victory, but they do so in seemingly effortless style, eliminating several bosses while taking no damage at all. Between the intense boss battles, wildly impressive movement, and pure mastery required to complete, this blindfolded Sekiro run earns a spot as one of the best speedruns of AGDQ 2022 day seven.

Usually, GDQ events wrap up with a lengthy RPG speedrun, but at AGDQ 2022, Metal Gear Solid closed out the marathon with a flurry of stealth and speed. Performed by runner dlimes13, this “Console, All Bosses, Extreme” speedrun hasn’t been seen at a GDQ event in nearly 10 years, mostly due to its incredible difficulty and tough tricks. The Metal Gear franchise has a huge speedrunning community, so it was awesome to see dlimes13 and the other MGS speedrunners come together to end AGDQ 2022. This speedrun has a bit of everything, including out-of-bounds tricks, tight movement sections, and enemy manipulation, making it a grab-bag of interesting exploits. Overall, this run of Metal Gear Solid provided a great wrap-up for AGDQ 2022, earning its spot as one of the best speedruns of the day.

As the final donations were tallied and the marathon came to a close, AGDQ 2022 raised $3.4 million for the Prevent Cancer Foundation, marking a new donation record for the Games Done Quick organization. Watching this happen live was an absolute treat, warming out hearts and reinforcing the power of the gaming community. AGDQ events are always an uplifting way to start the year and AGDQ 2022 continued that trend, oozing good vibes and generosity. We can’t wait for Summer Games Done Quick 2022, but for now, we’re going to catch up on missed sleep and reflect on the week gone by. Thanks to everyone who donated and stopped by for our coverage! We’ll see you in a few months for SGDQ 2022!