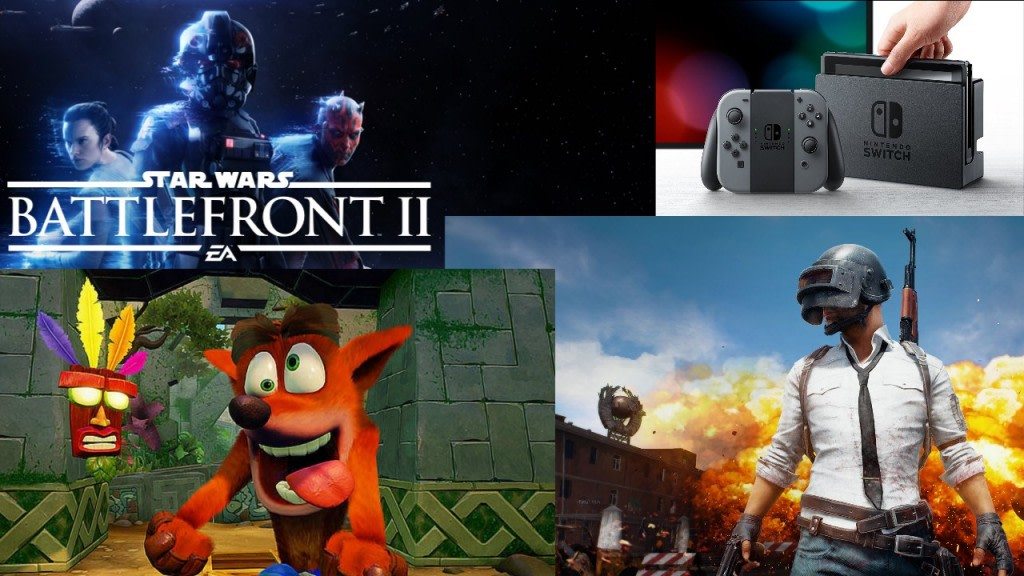 2017 was a wonderful year for gaming right when we needed a break from the real world. There were a few conroversial moments in the industry as well, but thankfully, the biggest issues (loot boxes) saw a heroic blowback from customers that could set a major precedent.

Before 2017 is too far from our minds let’s remember the highs and lows as we move forward.

Before the Switch many were calling for the company to stop producing consoles. As someone who loves the Switch, I’m grateful they stuck to their guns and pushed forward. Nintendo is the longest running console manufacturer going and they weren’t phased by failure.

While the Wii and Wii U’s lack of power frustrated core gamers, the Switch finally gave a solid trade-off. Giving up 4K and cutting edge power makes sense if you can take it on the road. Nintendo also brought back third party support, porting mainstream hits like DOOM, Rocket League, Skyrim, and the upcoming Dark Souls Remastered. Add those to the stellar Zelda and Mario entries and solid indie support and you can see why the Switch is the fastest selling console in North American history.

We’ve seen creative mods hit but never like this. PUBG would have still been considered a success if it cracked the top 50 on Twitch, but it blew everyone away when it knocked off the MOBAs for #1. It’s janky and unfinished, but the unique thrill is provides won nearly everyone over, warts, hacks, and all.

The Crash Bandicoot hype had been building for years. Sony faked out the fans at a previous E3 before letting the dam burst on a remastered trilogy of their first mascots PS1 collection. I hadn’t played more than a demo disc’s worth of Crash as a youth but still found myself excited to go back. Turns out the most N.Sane part of the game was the difficulty, but hey, it was fun while it lasted.

Sonic Mania raced the hype train as Sega actually gave an ROM-hacker the lead on their latest remake of classic 2D Sonic. Christian Whitehead had previously ported Sonic to mobile for Sega when he proved he could do it better than them, and his first large-scale project was a smashing success. Now I can’t wait to see him get a full game of new levels!

Yooka-Laylee had Banjo and N64 fans hurl kickstarter money for a game that did what it promised, while A Hat in Time quietly evoked ’90s platforming better than all of them.

Mass Effect gets thrown through a window

One of the greatest gaming trilogies spawned a disaster so terrible it apparently killed the next two sequels. Kotaku unearthed the tragic mismanagement as EA/Bioware set Andromeda up for failure. An unproven team and Director were forced to use an engine not meant for open RPGs and did as well as expected under those circumstances. Rumors of team members and ideas stolen for Bioware’s other big project Anthem are easy to believe with one look at Peebee’s mouth.

It didn’t have to be great, but under these conditions, there’s no way it could have been good.

Visceral – makers of Dead Space and the upcoming Amy Hennig Star Wars game – was closed, killing the project and leaving Hennig’s position in the company up in the air. Reports that production wasn’t going well due to Hennig’s communication with the technical members of the team and Disney’s sluggish control of anything in the Star Wars universe would have been enough for most fans to understand it just wasn’t coming together. EA however, chose to state that single player games were a lower priority than online ‘games as a service’, painting them as the Renegade option once again.

EA again made headlines for the wrong reasons when their new loot box mechanic received severe backlash from fans, resulting in the most down-voted Reddit comment of all time. Just days before release, EA backpedaled, temporarily removing the ability to pay for loot boxes. The damage was already done, as most loot box systems are designed to make free unlocking so tedious that it encourages real world spending. Players were furious to think they’d be spending full price on a Star Wars game only to have the actual Star Wars characters locked away until they ‘earned’ them.

Although Battlefront II and those that bought in suffered, we might have seen an important precedent set moving forward. Loot boxes continue to creep into gaming as a viable way of continuing revenue after the initial purchase, and EA’s retreat could influence where gaming goes in the future.

Console generations have payed by the same rules since the NES and Master System first transitioned to the SNES and Genesis/Megadrive. But with the PS4 Pro and the uber powerful Xbox One X created a potential half-step, we might have seen the last traditional console upgrade from Sony and Microsoft. The PC model has worked for decades and phone manufacturers are making gigantic profits from annual updates, it’s likely Sony and Microsoft might shift gears.

Whatever happens, it’ll be exciting to see what comes next.