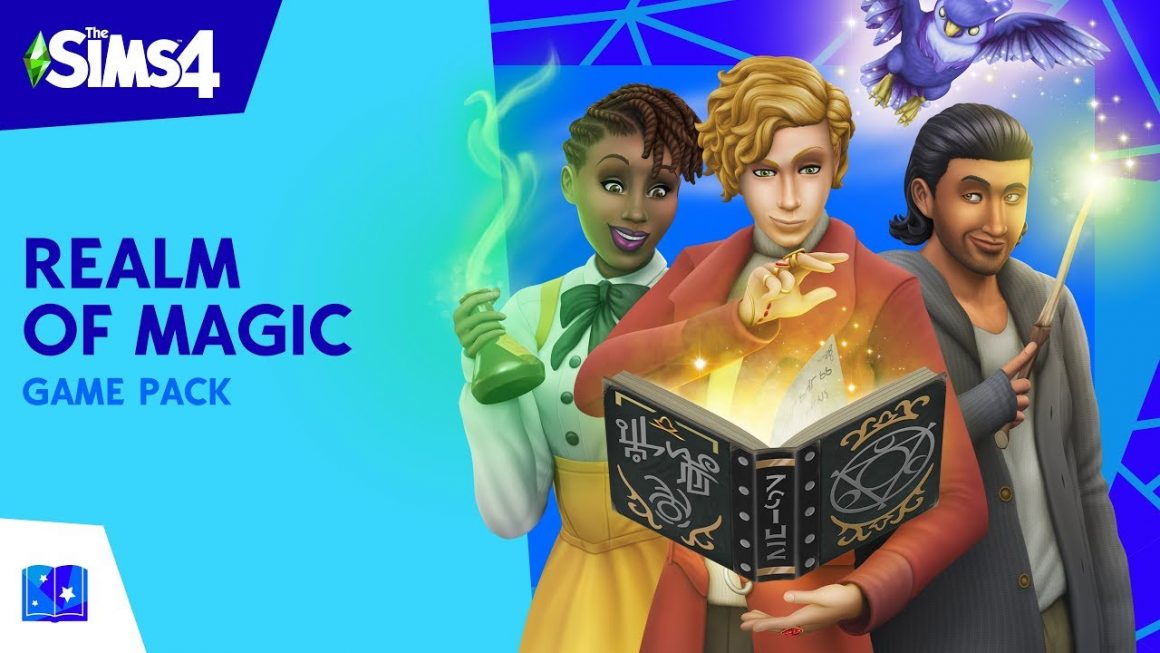 As Realm of Magic is a witch-themed pack, the vast majority of the CAS and Build Mode objects are appropriately witchy and magical looking. There’s a handful of new hairstyles in the game pack, most of which are for female sims by default as usual. The clothing options definitely feel a bit more equal in terms of fashion choice for female and male sims in Realm of Magic than usual. Most of the clothing options, while mystical looking, can actually be used for a more normal playthrough as well. The gothic dresses and quirky hoodies could easily fit in with any style of play. The CAS items in Realm of Magic could easily fit in with the aesthetic of Vampires as well without them being too closely linked. There are no new items for toddlers or children, however, which is slightly disappointing considering children can have magical traits as well. Overall I was pleased to see the variety of items on offer, and I can see myself using many of the CAS items from Realm of Magic when I’m not playing with Spellcasters as well. 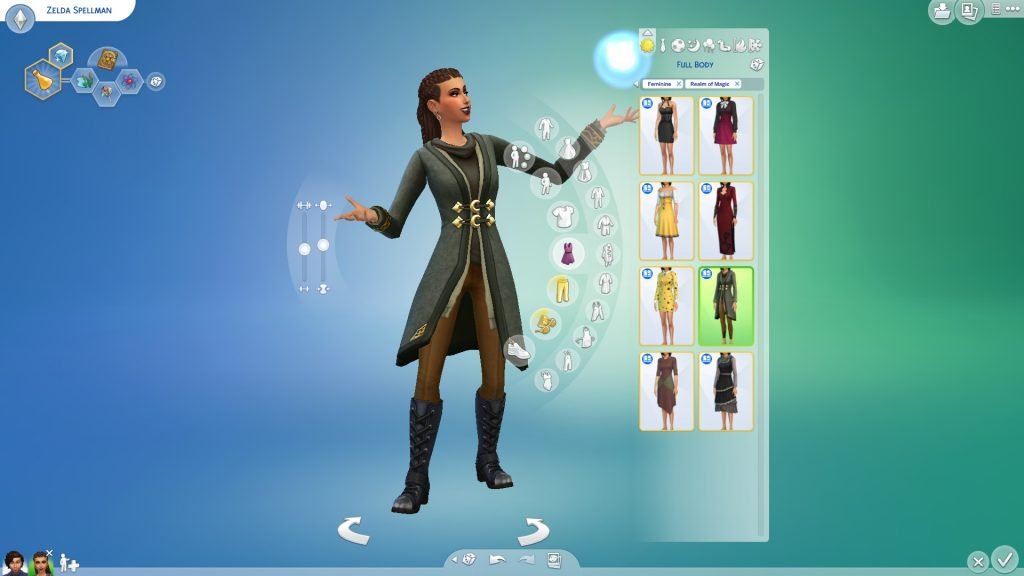 Realm of Magic boasts a reasonably sized Build Mode catalogue, adding new doors, windows, flooring, wallpapers, and much more. Most of the items included in Build Mode go together very well and look very traditionally witchy and quirky. There are stained glass windows, decadent doorways, and beautiful fences and columns to fully kit out your Spellcaster’s abode. The non-magical furniture objects are absolutely gorgeous, with plenty of traditional and colourful swatches. The new bedroom furniture, in particular, looks amazing, and I’ll probably end up using them a lot. Most of the items in Build Mode, while featuring some gorgeous old fashioned swatches, also include plain black and white options too. The simple options really make the items in this pack versatile, proving that the development team over at EA do listen to players on occasion. Having said that, quite a few items in Build Mode are just recoloured base game items, such as the kitchen counters. There are also objects designed to help your Spellcaster hone their craft, such as the cauldron, new bookcases, and apothecary decorative cabinets.

In addition to new CAS and Build Mode items, Realm of Magic also adds a new neighbourhood to The Sims 4. Glimmerbrook has 5 separate lots of land players can build and play on, making it similar in size to Forgotten Hollow from the Vampires game pack. Although Glimmerbrook is pretty small in size, it looks gorgeous and fits the aesthetic of the pack beautifully. Unlike Vampires, Glimmerbrook also features a hidden world that can only be accessed by having your sim travel through a portal hidden by the waterfall. The hidden neighbourhood is called The Magic Realm, and is divided into three sections: Casters Alley the marketplace, Duelling Grounds, and the Gardening Area. It is not possible to live or build on any of the lots in this world without using cheats, and can only be visited by using the portal in Glimmerbrook or by using an item called a glimmerstone.

The Magic Realm is a nice touch for this pack and helps flesh out the gameplay by quite a bit. Once you load the game there are a few prebuilt lots which the development team put together for players to start off with. Unfortunately, this once again highlights the insufficient QA testing that plagues The Sims 4. Stairs lead to nowhere, roofs have not been painted properly, and rooms are mostly empty. Theoretically, it should have taken 5 minutes to double-check a build before launching the pack. While it by no means ruins the game pack, it does highlight the lack of attention or care shown for paid content for the Sims lately. 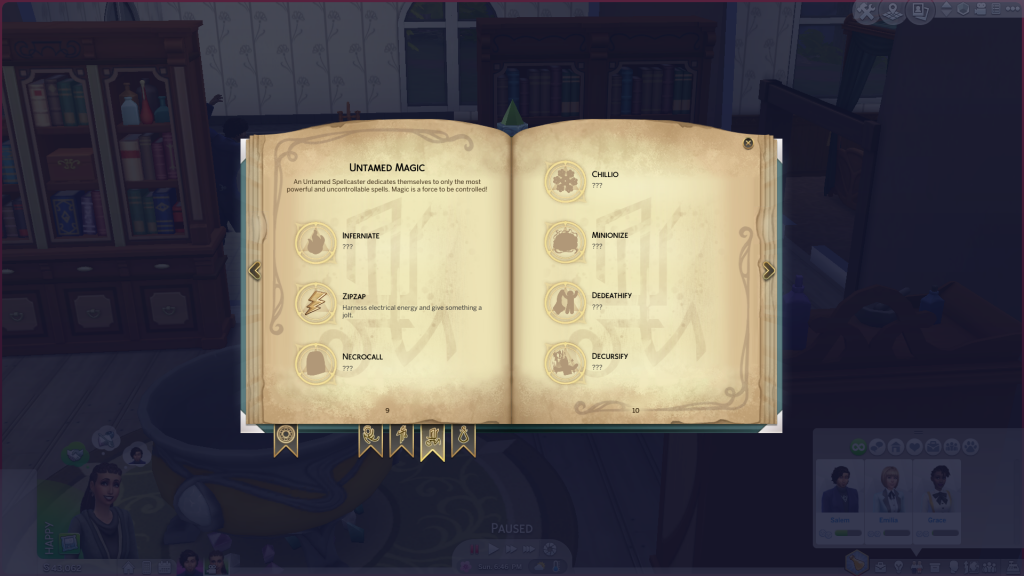 Realm of Magic comes with no new traits, although it does include two new aspirations. The first, Purveyor of Potions, is part of the Nature category and makes your sims want to learn and craft every available potion. The second, Spellcraft & Sorcery, can be found in the Knowledge aspiration category. Sims with this aspiration will crave a deep knowledge of the arcane magical arts. Although there is no new trait which can be selected in CAS, if a Spellcaster sim has a child then their offspring will be born with the Magical Bloodline trait in a similar way as the offspring of Father Winter or an Island Elemental.

The biggest gameplay inclusion in Realm of Magic is the new Spellcaster life state. Unlike previous life states in The Sims 4, you can’t create a separate form for a Spellcaster sim in CAS. Spellcasters act like witches and wizards in previous Sims games and can cast spells and create potions. A regular sim can become a Spellcaster by performing a Rite of Ascension once visiting the Magic Realm. Spellcasters have a new perks menu similar to the vampire skill tree, and can also access a spellbook. These sims can die from overexerting their magical supply and can curse themselves by casting a spell unsuccessfully. Despite this, progressing as a Spellcaster isn’t particularly difficult, and it’s pretty easy to become very powerful.

Show Me the Magic

There are different kinds of magic that sims can perform: Practical, Mischief, Untamed, and Alchemy. Sims can learn more than one style of spell though, so you won’t be limited like you were with witches in The Sims 2: Apartment Life with witch alliances. The spells range from practical things such as teleportation to more powerful spells such as resurrecting deceased sims. Up to 24 spells and 15 potions can be logged at once into a sim’s spellbook. You can also purchase broomsticks, spell books, and magic wands from vendors in the Magic Realm.

Sims will also be able to purchase familiars. Familiars are magical animals which protect Spellcasters from dying and will help them cast spells. There is no limit to how many familiars your sims can own, although you can only use one at a time. If you have Cats & Dogs installed then you can have a cat or a dog as your familiar as well. Spellcasters can be levelled up in order to perform more spells and become more powerful. The perk tree looks very similar to that included in Vampires and Get Famous. There are 24 perks to be unlocked, categorised into 4 types: Prowess Perks, Alchemy Perks, Spellcasting Perks, and miscellaneous. 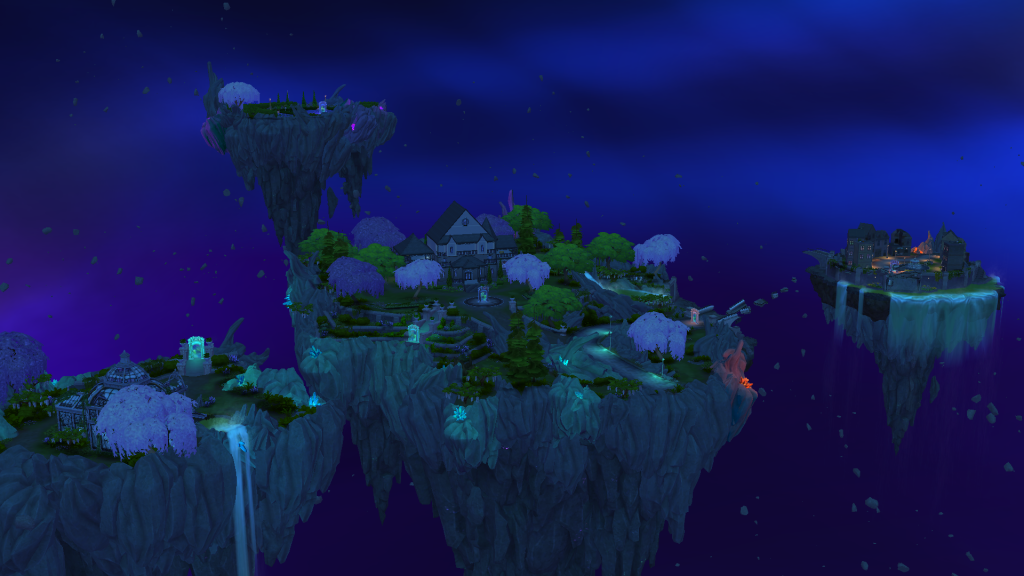 Like all occult themed packs, I’m not sure how much longevity Realm of Magic will have. The CAS and Build Mode objects are surprisingly versatile for an occult themed pack, and I can easily see myself using them frequently. They also fit very well with other packs, most obviously Vampires, without feeling like objects were held back (I’m looking at you My First Pet Stuff).

While Glimmerbrook is pretty small in size, I can’t blame the development team for that considering they’re postponing the game breaking update for players using a 32bit machine so as many players as possible can experience this new expansion. Spellcasters are possible my favourite life state to date in The Sims 4, since they’re basically the same as vampires but without those pesky sun allergies. The decision to divide the occult packs into individual game packs turned out to be highly beneficial, as Realm of Magic is packed full of (mostly) well-made content.

If you’re a Sims 4 fan who’s looking for a more eccentric experience then you won’t be disappointed. If, however, you prefer to play with more realistic storylines then I’m not sure Realm of Magic is for you. Overall, if you’re looking for a new way to play The Sims 4 and fancy some new gothic looking CAS and Build Mode objects, then I would highly recommend adding Realm of Magic to your collection.