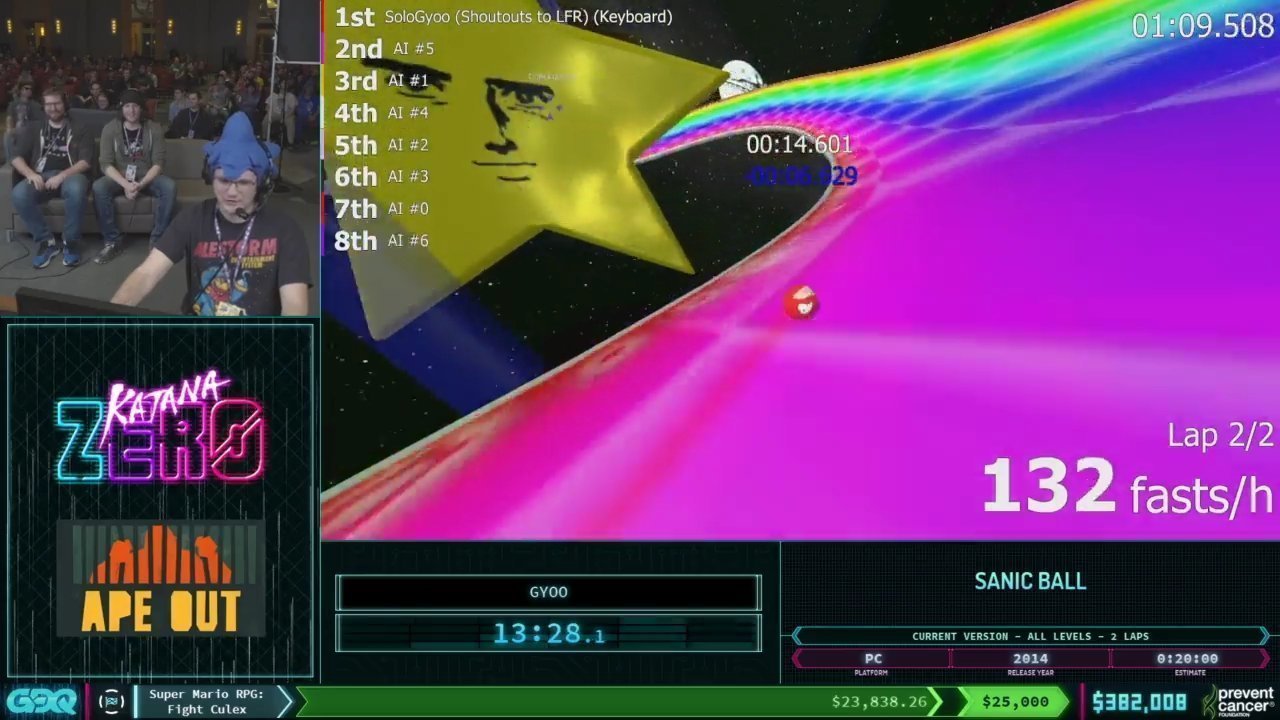 Day three of AGDQ 2019 continued the trend of interesting speedruns and large donation sums. As AGDQ 2019 nears the halfway mark, runners buckled in for even more fast games, all in an effort to raise money for the Prevent Cancer Foundation. At the end of day three, viewers and runners had raised over $450,000 towards the cause.

I was unable to watch as much of day three as I wanted to, but I was still able to catch plenty of exciting runs. The early morning saw a short horror block with Resident Evil and Silent Hill 2, followed by a few adventures from Lara Croft in Tomb Raider. Most of the morning was taken up by the lengthy NieR: Automata run, which lasted for over 4 hours. A selection of NES platformers and PC games finished off the morning, leading into the Sonic the Hedgehog block in the afternoon. The night finished off with a Mario trifecta, starting with Mario Kart 64, continuing with Super Mario Bros. 3mix, and ending with Super Mario RPG. It was a great day full of fast gaming, and enough variety to ensure entertainment for all. Below, we’ve compiled a list of our favorite speedruns from day three of AGDQ 2019. If you’re looking for a place to dive in, or wondering what runs struck us the most, this list is a great place to start.

Don’t forget to check the official AGDQ 2019 schedule for a list of every game played at the marathon. To watch these speedruns (or any runs from the event), you can check out the AGDQ 2019 Twitch stream and videos, as well as the GamesDoneQuick Youtube channel. Enjoy the speedruns!

Vice: Project Doom (any%) by garadas21 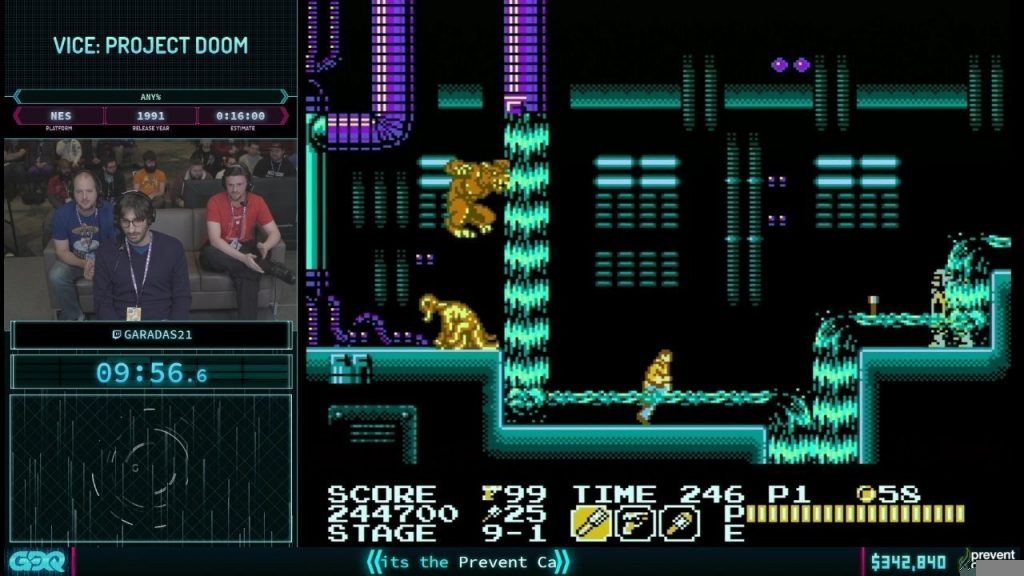 The morning NES block was full of great action platformers, and this run by garadas21 shined a light on an underrated gem. Vice: Project Doom is a colorful side-scrolling action title, and one that is well suited for the morning time slot. Although the gameplay can be quite chaotic, garadad21 and crew gave us an upbeat and enjoyable showing to watch. It’s classic NES action in a bite-sized format, and a game that is lesser known. These two factors make for a satisfying run that recalls the lost age of cult classics. 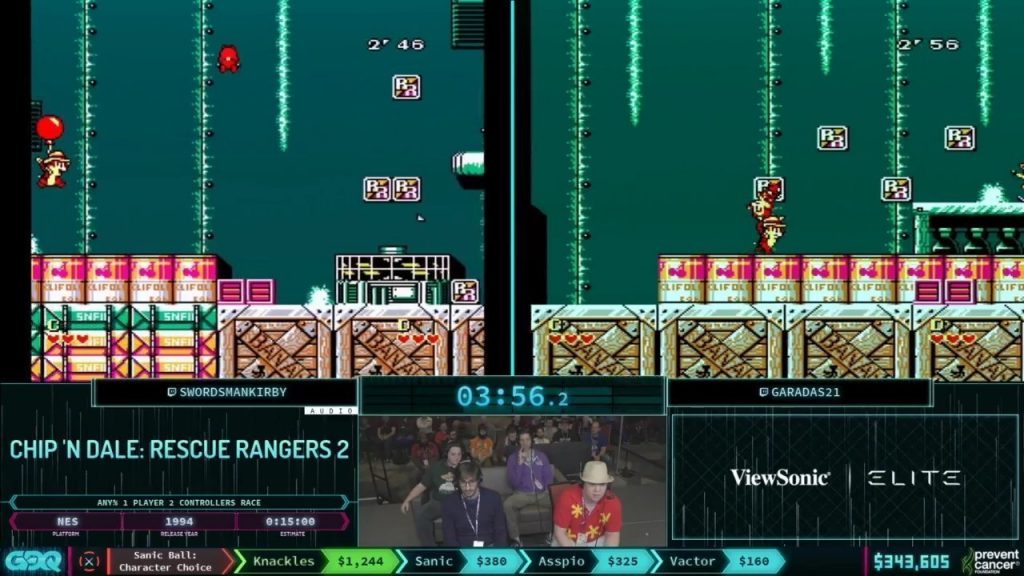 Following his Vice: Project Doom run, garadas21 and his opponent swordsmankirby prepared for an extremely impressive race. One of the most technically impressive speedruns of the bunch, the Chip ‘n Dale 1 player 2 controllers race was absolutely baffling. Both garadas21 and swordsmankirby sped their way through this cute and fun side-scrolling platformer while simultaneously controlling both characters on screen. By rubber banding and taping two controllers together, the two runners played the cooperative mode solo, racing each other in an intense sprint. A few mistakes from both runners made for a close race, but both runners have to be commended on their insane skill. It’s hard enough to beat Chip ‘n Dale: Rescue Rangers 2 by yourself; adding in a second controller only heightens the challenge tenfold. 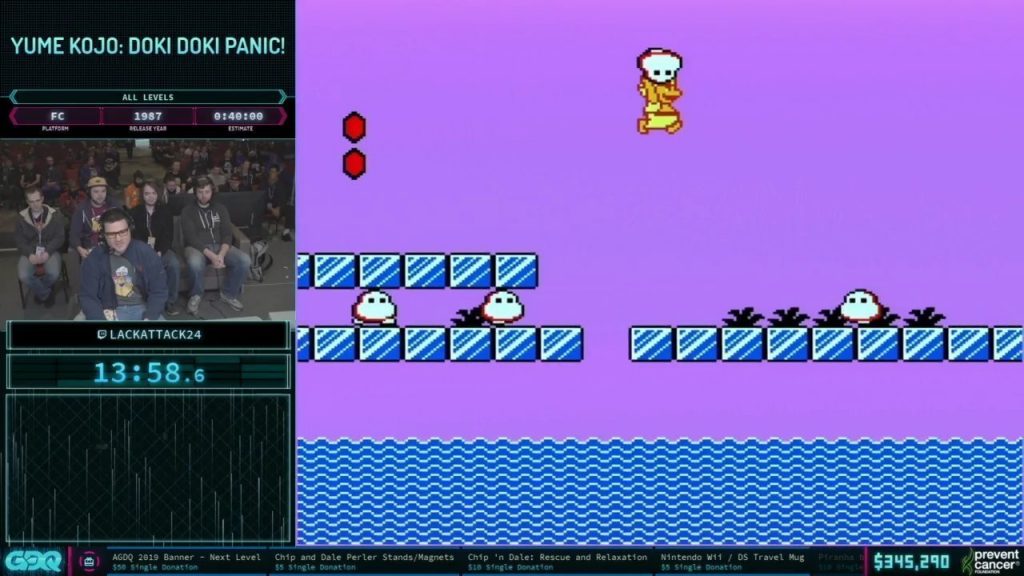 Most gamers know Doki Doki Panic! by a different name; Super Mario Bros. 2. This Japanese Famicom-CD title was the foundation for the US release of Super Mario Bros. 2, and gave us fan favorite characters like the Shy Guys. In its original form, players still control four different characters, making their way through tough platforming levels. Unlike Super Mario Bros. 2, Doki Doki Panic! doesn’t contain a run button, which drastically changes the strategies and pace of the run. For those who are more familiar with Super Mario Bros. 2 speedruns, this speedrun is a fun twist on the expected mechanics. It’s also interesting to see the small changes made between the two games, and the commentary cast reflected that. As LackAttack24 made his way through the game, we were provided great commentary that focused on major differences between the games, unique strategies, and other informative tidbits of knowledge.

Momodora is a game I was unfamiliar with until AGDQ 2019. I had heard of the game prior, but never seen it in action. On the surface, Momodora looks like a challenging pixelated platformer with a quirky art style. It’s a mixture between cute, chibi characters and dark atmosphere and tone. Although the standard and hard difficulties are challenging enough, runner SNeaky played on the Nightmare difficulty. This incredibly hard difficulty setting whittles the player’s health down excessively, making nearly ever enemy in the game a threat. Every single attack can kill you in one hit (at least in the beginning), so watching SNeaky execute challenging jumps and narrowly dodge enemies was riveting. Halfway through the run, the character controls change, adding a nice variety to the gameplay. If you’ve never seen Momodora, SNeaky’s speedrun is a great way to check it out.

Sonic Mania Plus (Encore Mode any%) by JoeyBaby69, Claris, and Zaxon96 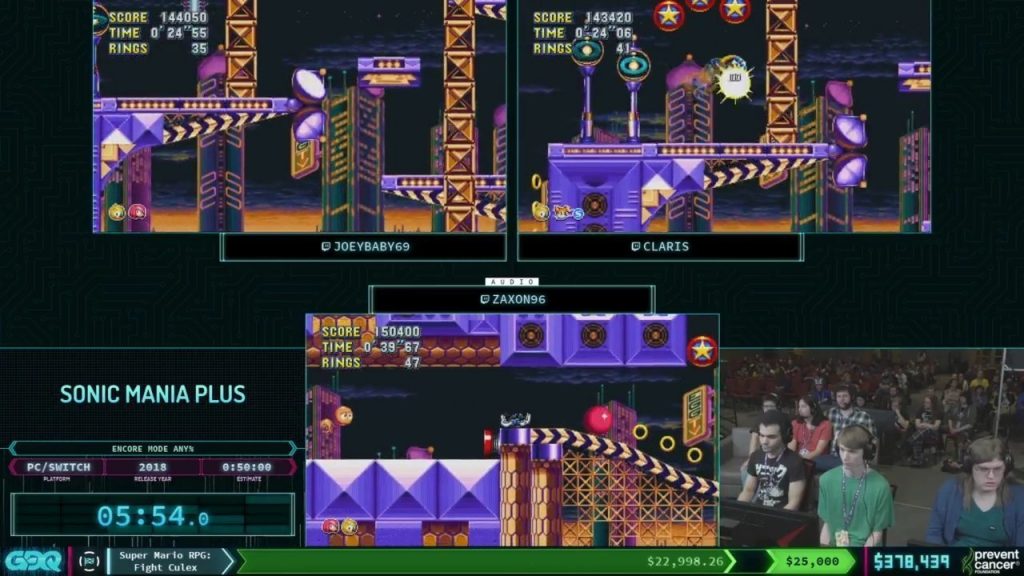 Sonic Mania was one of my favorite games in 2017, and it brought my love for Sonic back from the grave. In many ways, the game is better than some of the classic Sega Genesis titles, regardless of how blasphemous that might sound. We got to see a speedrun of Sonic Mania last year, but AGDQ 2019 turned things up a notch. This time, we got to see a three person race between top-tier runners JoeyBaby69, Zaxon96, and Claris. The category was Encore Mode any%, an exclusive mode in the Sonic Mania Plus release. The three runners absolutely dominated the game, reaching speeds that were “blink and you’ll miss it” fast. The entire event was appropriately fast given the franchise, and a number of glitches and zips made things even more interesting. This was also one of the closest races yet, with multiple lead changes, accidental deaths, and upsets. If you’re looking for a suspenseful and fast-paced race, the Sonic Mania Plus three-way race is at the top of the list. 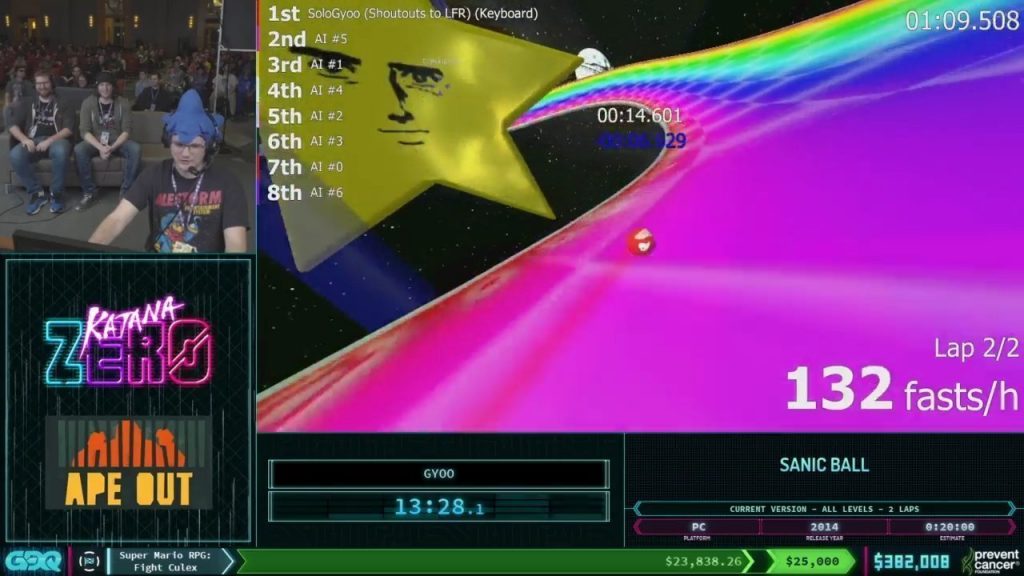 Occasionally, there are speedruns that are so ridiculous that they are worth watching on that value alone. Gyoo’s speedrun of Sanic Ball firmly falls into that category. Sanic Ball is a mixture of awkwardly fast racing mechanics and obnoxious Sonic memes. Race banners read “Please Go Fast”, speed is denoted in fasts per hour, and the characters are all dopey looking balls that resemble Sonic characters. It’s a very brief run that’s over before you know it, but a highly entertaining way to spend 15 minutes. This is definitely one of the most meme heavy runs of AGDQ 2019.

Sonic the Hedgehog (any% glitched) by Dr.FatBody 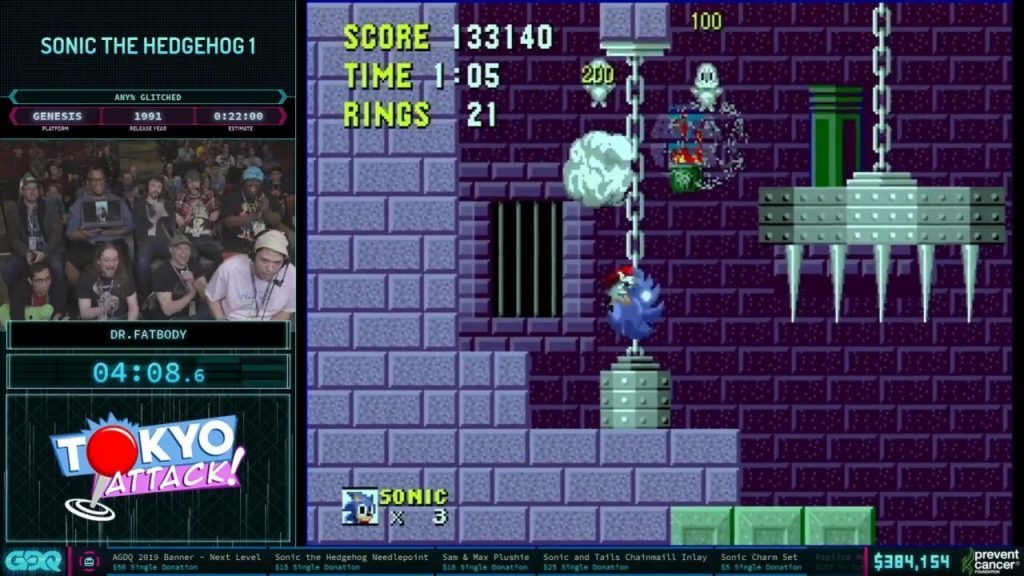 When speedrunning a game, each runner has their own personality and style. Sometimes it’s reserved, othertimes it’s comedic, but mostly speedrunners like to have fun. That’s especially true for Dr.FatBody and his absolutely packed couch of pals, who sat down for a quick but massively entertaining run of Sonic the Hedgehog 1. From the start, Dr.FatBody exuded personality, charm, and a generally honest and positive attitude. His attitude and energy level rubbed off on the audience and commentary couch, who quickly became uproarious in their excitement and hype. Instead of trying to perform the cleanest and quickest run of Sonic the Hedgehog, Dr.FatBody opted to give viewers a great exhibition of glitches available in Sonic 1. This includes a variety of incredibly tough tricks that require millisecond precision and nearly inhuman accuracy. The whole speedrun had a general air of fun and excitement, as Dr.FatBody encouraged the audience to be as loud and hyped as possible. Few speedrunners are able to command the audience and viewer’s attention quite like Dr.FatBody did, and he did so while showing off immense skill. Add in the truly cool and tricky glitches, and Dr.FatBody’s run easily became one of AGDQ 2019’s best so far.

That’s all we have for day three! Like I said in the introduction, I missed a handful of runs that I was interested in seeing. Like all of my highlight lists, this is a small selection from a vast number of speedruns that were completed. You can check out the official schedule for a list of every game. There’s still plenty marathon left to go, with a number of hyped up runs that I can’t wait to check out.

We’ll be back tomorrow with our picks from day four, but until then, be sure to follow us on social media (@official90skid) for live coverage of the event! See you tomorrow, and enjoy the speedruns!