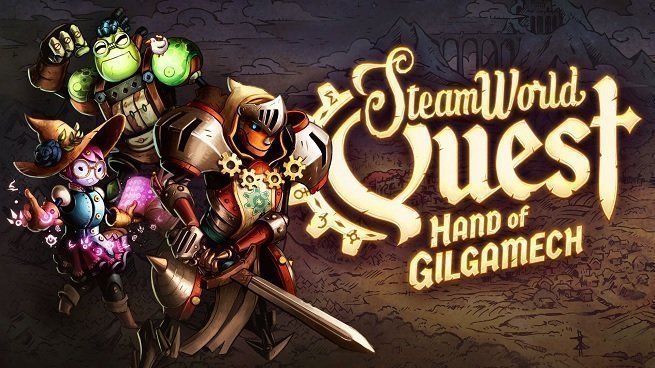 SteamWorld Quest: Hand of Gilgamech lives up to Image & Form Games’ remarkable pedigree. It’s a must-play for anyone already familiar with and fond of the SteamWorld universe, and I can recommend SteamWorld Quest to almost any RPG lover looking for something fresh, mechanically satisfying, and lighthearted.

At the beginning of the game, three companions set out on a quest to rescue the members of their local heroes guild. As you might imagine, this once-simple task with clear obstacles unravels into something much greater, and much more sinister.

The scope of the narrative is humble, if not unambitious, but SteamWorld Quest always feels authentic in its simplicity. Not once did I roll my eyes and think to myself, “I’ve seen this one before.” It’s not derivative in the negative sense. It’s a fun, Image & Form take on the hero’s journey with beautifully-designed characters who have interesting and funny things to say. It’s like a warm-and-fuzzy Saturday morning cartoon RPG, and I love that.

SteamWorld Quest shakes up turn-based combat by giving each character a set of cards that they wield in battle. Each card represents an attack, spell, or skill, and you’re allowed to play up to three cards in a single turn. As you progress through the game, each character will find, craft, and unlock multiple copies of several new cards, but a single character can only choose up to eight cards to keep in their battle deck at any given time.

Three party members; three decks; one random spread of cards at the beginning of a battle. Deciding which cards to redraw, which cards to play, and the order in which you’ll play them, is absolutely critical to your success in a deadly scrap. There is a huge well of potential strategy here, and finding the best combinations and synergies between characters never got old to me.

As you play basic attack and kill cards, you’ll store up steam, represented visually by cogs. Cogs can be spent to play more powerful cards which unleash devastating attacks, or grant your party powerful buffs. Spending a turn by playing three cards from a single character’s deck will trigger a special follow-up action from that character, which often provides invaluable advantages for your party, so it pays to plan ahead.

Multiple bosses and challenges in SteamWorld Quest wiped out my party, forcing me to regroup, reassess my approach, fine-tune my decks, and try again. Sometimes boss fights play out like puzzles, and failing doesn’t mean that you’re weak, it just means you’re not playing your cards right (no pun intended). There’s nothing quite like dominating a once-terrifying foe with sheer cunning; stacking the deck in your favor, and exploiting its weaknesses.

Combat was, by far, the best part of SteamWorld Quest for me. The exploration and traversal never manages to capture that feeling of setting out and getting lost in a wide-open world. You’ll simply drift from screen to screen, chopping through random barriers and props to find gold or uncover hidden paths.

It feels a bit compartmentalized and overly linear, but the world is lovely and unique — and completely hand-drawn! Completionists will have a ball poking around every corner, and there’s cleverly-hidden treasure scattered throughout each chapter. I loved sniffing it all out.

SteamWorld Quest demands that you frugally oversee your resources. I never had a surplus of gold, and not once during my play-through did I have enough gold to buy all of the weapons, cards, accessories, items, and upgrades that I wanted at any given time.

If you’re an item-hoarder like me who always likes to be prepared and well-equipped, you’ll be wringing your hands trying to decide what’s most important at any given time, and what you can live without. It’s not unfair or unbalanced, but it is unforgiving. Unless you intentionally grind for currency, expect to make every last piece of gold count until you reach later chapters.

Overall, SteamWorld Quest is a rich and rewarding steampunk storybook come to life. The story it tells and the world you explore are simple, but that simplicity is proportionately balanced by the stellar card-based combat and deck building. For the price, there’s a lot of content to chew on, and additional challenges to keep you coming back.

Image & Form Games faithful will very likely have SteamWorld Quest pre-loaded and ready to go the moment it hits the eShop, and I don’t think they’ll be disappointed. The rest of you owe it to yourselves to come find out why we all love this series so much. This is an expertly-paced, fiercely-charming entry in the SteamWorld saga, and I can’t wait to replay it.