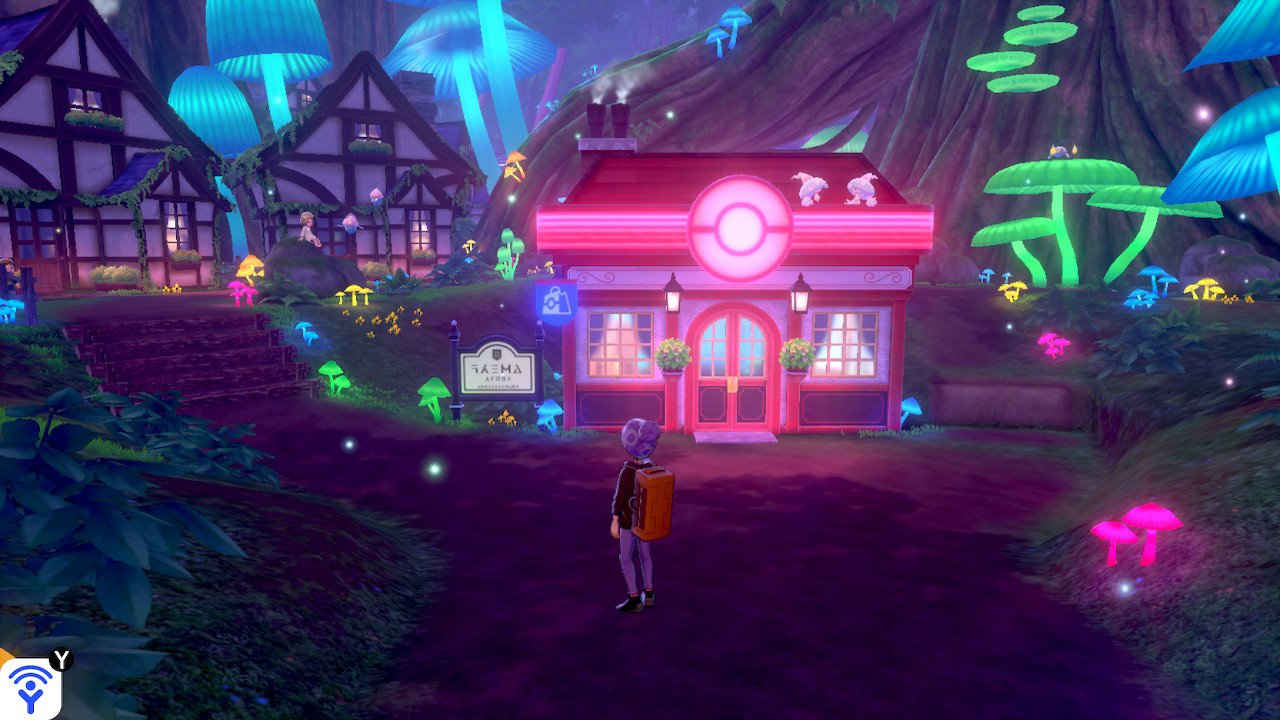 Pokemon Sword Review – Catch 'Em If You Can

Pokemon Sword is the newest entry in the massively popular Pokemon franchise, and the first game in the main series to be released on a major home console. Until now, Pokemon games were mostly found on Nintendo portable systems like the Game Boy and 3DS. Occasional spin-offs have appeared on consoles, but fans have been begging for a traditional Pokemon adventure on modern hardware for a long time. Alongside its partner game, Pokemon Shield, Pokemon Sword promises to deliver the series’ classic turn-based gameplay, a wide roster of cute and personable creatures, and snazzy modern graphics to boot. Along with several new gameplay mechanics and a whole new region to explore, Pokemon Sword presents an interesting and alluring experience for Nintendo Switch owners. Beneath the modern graphics and new additions, does Pokemon Sword stand up with the other Pokemon games as a fantastic RPG adventure, or is this an under-baked dud ripe with disappointment? Let’s find out if Pokemon Sword gives fans the journey they’re all been waiting for.

In Pokemon Sword, you play as a young adult living in Postwick, a quaint village in the Galar Region. Packed with a wide variety of creatures known as Pokemon, the people of the Galar Region have infused the Pokemon into their lives. Pokemon roam freely throughout the region, and are also battled against each other as a popular sport. It sounds a bit cruel in concept, but the generally lighthearted nature of the Pokemon franchise keeps things from getting too dark. Dreaming of becoming a Pokemon-trainer Champion, you’ll set out on a wild journey across the beautiful Galar Region with your neighbor, Hop.

Before your adventure truly begins, you’ll have to select your first Pokemon. I’ve always chosen the water-type Pokemon to start, so I immediately paired up with the sad yet adorable Sobble. Those who favor fire-types can get some pep in their step with Scorbunny, while grass-type fans will surely fall for the nimble primate Grookey.

Like in other Pokemon games, your main objective is to explore the many towns and surrounding environments of the region, collecting Pokemon and training them in battle. Tons of Galar Region citizens fancy themselves Pokemon trainers as well, so you’ll often face off against characters in Pokemon battles. Following a somewhat linear path, you’ll work your way through each of the notable locations in the Galar Region. During your adventure, you’ll meet a variety of fun and cheery characters, set up camp and cook some curry, and level up a comprehensive team of fight-ready Pokemon.

In order to become the Pokemon Champion, hopeful Pokemon trainers must successfully complete the “Gym Challenge”. Similar to the gym formula in other Pokemon titles, the Gym Challenge tasks players with reaching each of the eight Pokemon gyms and defeating the powerful Gym leader. Each gym is themed after a certain type of Pokemon, encouraging you to learn each strength and weakness for the various types. Pokemon types include: grass, fire, water, flying, ground, fighting, and more. Even rarer Pokemon types like fairy, psychic, and ghosts can be caught. Generally speaking, you’ll need a decent variety of Pokemon in your arsenal to handle these gyms.

Although the Gym Challenge is very similar to past Pokemon games, there are a few differences. Gym battles now take place in giant stadiums, reflective of the Galar Region’s near-obsession with the sport of Pokemon-battling. Cheering fans amass in the thousands as you face off against the best Pokemon trainer of that area. It’s all quite a spectacle, especially when you take the new DynaMax mechanic into account, which increases the size of your Pokemon to enormous proportions.

Before battling the Gym leader, you’ll have to complete the newly added Gym missions. Gym missions are all self-contained challenges, ranging from mazes to small mini-games. They almost always include battling or catching Pokemon, whether through trainer battles or other unique means. Between the larger-than-life presentation of the Gym Leader battles and the consistently quirky yet enjoyable gym missions, I found the overall Gym Challenge to be a compelling and fun motivation for my adventure. They were rarely challenging, but enjoyable nonetheless.

The Wild World of Pokemon

Just like in other Pokemon adventures, you’ll spend a decent bit of time battling wild Pokemon on the numbered routes between cities. Here, you can find new species of Pokemon lurking in the grass, and level up your Pokemon by engaging in random battles. However, Pokemon Sword adds a much larger area to explore that ultimately serves the same purposes as the routes; the Wild Area. Spanning a large section of the overall map, you’ll undoubtedly spend some time in the Wild Area during your adventure. However, the Wild Area serves several functions that are quite fun and beneficial, if you take the time to slow down and explore.

First and foremost, the Wild Area is the best place to find new Pokemon and train your existing party. The Wild is broken up into several different sub-areas, ranging from rainy lake-side hills to fields whipping with sand. You can encounter smaller Pokemon in the grassy areas, or choose to take on the stronger and larger Pokemon who roam freely. You might also run into other characters while perusing the Wild Area, who may want to engage in a battle or trade Pokemon.

Although the Wild Area can feel a bit empty from time to time, it’s a great representation of where the Pokemon franchise can go from here. The Gym Challenge is still an excellent focal point for the plot and overall progression, but the Wild Area stands out on its own. You can easily sink hours upon hours into the game simply running around the Wild, spotting new Pokemon and catching every single one you can. It’s also fun to re-visit the Wild Area throughout your adventure, as progressing further in the story allows you to catch Pokemon of even higher levels.

Take it to the DynaMax

The Wild Area is also where you’ll encounter the new DynaMax mechanic. Players can use their DynaMax powers in select areas, which are usually during Gym Leader battles and DynaMax Den fights. Your DynaMax wristband allows you to imbue your current Pokemon with extra-strength, causing it to grow to towering heights. Once a Pokemon is DynaMaxed, it has a new set of super-powerful moves that it can use for three turns. Generally speaking, the mechanic is mostly for visual spectacle, but it does present some fun strategic options.

The DynaMax mechanic is most on-display in the DynaMax Dens found in the Wild Area. You can easily spot them due to a glowing red beacon that shoots into the sky, signaling nearby trainers of their location. When fighting in DynaMax Dens, you and three other trainers will face-off against one exceptionally powerful Pokemon.

You can link up with other trainers online for DynaMax Dens, or opt for the less-talented AI trainers. You can only bring one Pokemon into a DynaMax Den fight, so you’ll want to cooperate if you hope to survive. That said, felling one of these giant creatures is well worth it, as you’re often rewarded with experience bonuses and helpful items.

Much like Pokemon: Let’s Go, Eevee and Let’s Go, Pikachu, Pokemon Sword has a feature wherein you relax and hang out with your Pokemon, increasing your affinity with the creatures. In this game, there’s a focus on camping, as it goes hand-in-hand with the long treks in the Wild Area. In most areas of the game, you can quickly set up your Pokemon Camp and kick back for some rest and relaxation.

Inside of the Pokemon Camp, you’ll see your current party of Pokemon wander around and interact with each other. You can play with by using a handful of toys, such as playing catch with Pokeballs or waving a bell and feather. Players can also whip up a batch of curry by accessing the cooking menu, with an expansive “curry dex” that tracks every curry you’ve made. You can customize the curry by throwing in various berries you find in the world, perfecting your recipe while honing your cooking skills over small mini-games.

While not essential to the overall gameplay loop, camping with your Pokemon is a fun and relaxing way to spend a few minutes. Kicking back and cooking up some curry is also worth your time, as your Pokemon gain experience after enjoying a camp-cooked meal. You can also visit other character’s camps, interacting with their Pokemon and cooking alongside them to learn new recipes. Overall, the camping mechanic is a fun inclusion that helps break up the pacing of the adventure.

Apart from winning the Champion Cup and becoming the Galar Region’s Pokemon Champion, every Pokemon trainer has one overall goal; to catch them all! There are hundreds of Pokemon to catch, including a handful of extra-elusive rarities. Both Pokemon Sword and Pokemon Shield contain around 30 unique Pokemon, so true completionists will need to purchase both games. That said, it’s a monumental task to scour the Galar Region and collect most of them, so be prepared to sink dozens of extra hours into the game if you’re aiming for a full Pokedex.

Despite being a part of the eighth generation of the franchise, Pokemon Sword still has a fun roster of creatures full of variety. While some Pokemon lack inspiration from an artistic standpoint, most are exceptionally cool and fun to level up. I had a great time adding new and cute-looking creatures to my squad, eagerly awaiting for them to evolve into more powerful forms. There’s a good balance of both new and returning Pokemon as well, so fans of the original games and other past entries won’t feel left out to dry.

While it’s very possible that your favorite Pokemon won’t pop up in Pokemon Sword, I felt that the final roster was well-formed. It includes a fair number of returning Pokemon, but the roster rarely feels retreaded or repetitive. The various types of Pokemon are well represented within their respective environments around the Galar Region, making the world feel lived-in and alive. That childhood bond between player and Pokemon is still present, which is a testament to the power of the Pokemon brand.

The Bottom Line on Pokemon Sword

Pokemon Sword brings the Pokemon franchise to consoles with style, effortlessly inviting both newcomers and hardcore players to explore its bustling land of colorful and uplifting creatures. Although the story gets a bit thin at times, you’ll always feel motivation to continue to the next Pokemon Gym, continuously improving your team and strategy. Bright visuals, charming characters, and addictive turn-based gameplay keep Pokemon Sword fresh and fun over its roughly 30-hour journey.

Those looking to max out their Pokemon squad or complete the Pokedex are potentially looking at 80 – 100 hours of pure Pokemon gameplay, kicking up the value quite a bit. As a Pokemon fan of moderate degree, I’ve experienced both the classic (Pokemon Blue) and more modern (Pokemon Moon) Pokemon adventures, and I can happily say that Pokemon Sword mixes together the personality and gameplay of both old and new well. Even if you’ve never played a Pokemon game before, fear not, Pokemon Sword is a great place to hop into the series, and an excellent continuation for fans of consistently engaging world of imagination.