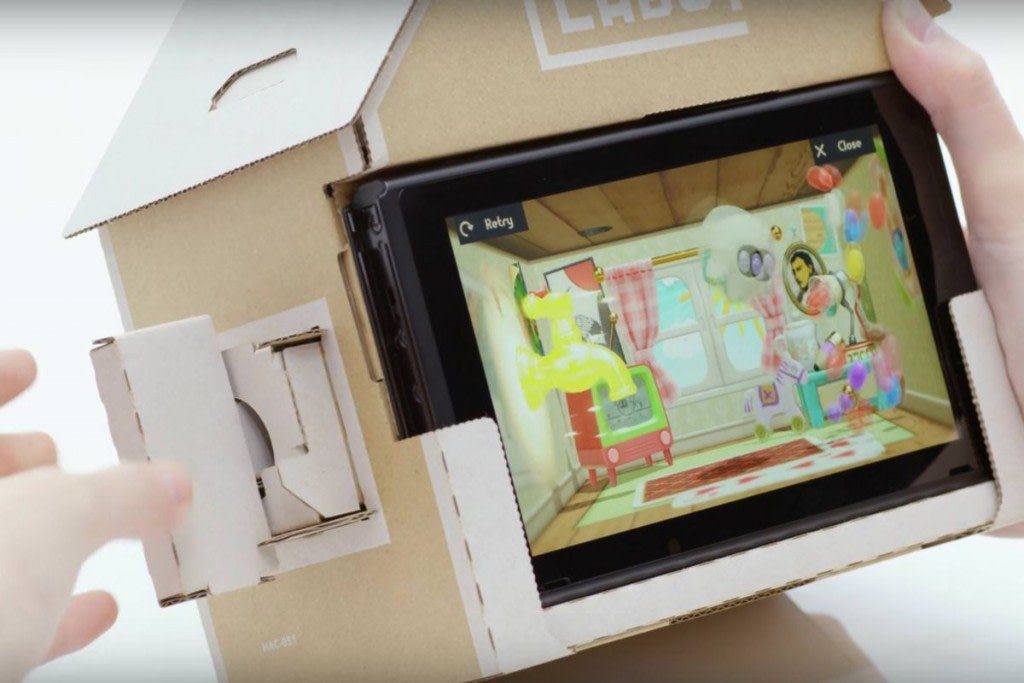 Nintendo is here to share more information on their inventive new Switch game experience, Nintendo Labo. The cardboard creations were recently revealed with limited details, but some new videos show us exactly what comes in each Labo package, as well as a look at the inner workings of the quirky Toy-Cons.

First up, the Nintendo Labo Variety Kit. This is one of the two packages you can buy for Labo, and it features five different Toy-Cons – the RC car, the fishing rod, the house, the motorbike, and the piano. These Toy-Cons are built by the player with pre-cute cardboard kits and then connected with the Switch console and controllers to work with the eight different game modes.

There’s so much to see and do with the Variety Kit. HD rumble allows the RC car to move around however you direct it, and you can actually turn the fishing rod handle to physically reel in a wide variety of fish. You can even create your own fish and view all your catches in Aquarium Mode. The house Toy-Con gives you a Tamagatchi-like pet you can interact with in a seemingly endless variety of ways by moving around the Switch and connecting various cardboard blocks to the house.

Each mode is unique, but the most interesting might be the Circuit and Stadium Modes, which work with the motorbike Toy-Con. Circuit Mode is basically a Mario Kart Maker of sorts, featuring lots of customization options for player-built race tracks. In Stadium Mode, players can create tracks by either capturing an image from the Joy-Con’s infrared camera or tracing a pattern using the motorbike. You can then personalize the track further with items and terrain adjustments.

See more details on the Variety Kit in the above video before moving on to the below overview of the Robot Kit. In addition to an inside look at the cardboard robot suit’s mechanics, Nintendo showed off the other game modes you can use with the robot.

The robot is the most complex Toy-Con of them all, and we’d hope so at that $80 price point. After folding and assembling the pre-cut cardboard sheets by following interactive instructions, players can suit up to get playing as a massive, destructive robot. Stomp through the city, fly over it, zoom through as a tank, or enter first-person mode for extra interactive gameplay.

In addition to the Robot Mode, players can also dive into Challenge Mode, which places your robot in a virtual environment for an array of explosive tests and puzzles. If you have a friend with the Robot Kit, you can fight each other in VS Mode and see who comes out the top robot. What’s more, Robo-Studio lets you play make believe by putting the Switch tablet inside the robot backpack, which makes different sounds as you stomp and punch around.

Customize your in-game robot in the Hangar by sticking cardboard tools into the robot Toy-Con and turning the dial to rotate the in-game color wheel. Of course, you can personalize your physical cardboard robot — in addition to all other Toy-Cons — to your liking with paint, crayons, stickers, or even the bonus cardboard pieces each kit comes with.