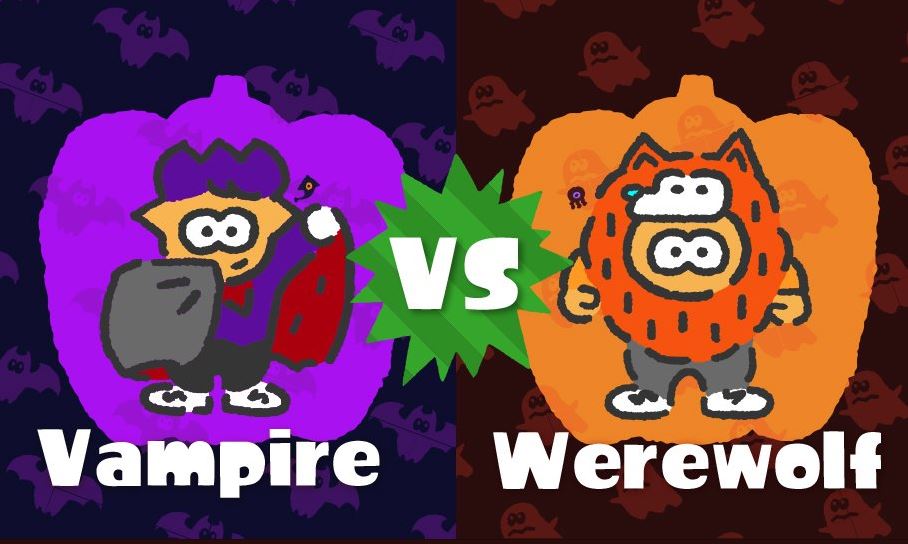 While Splatoon 2‘s Splatfest event has already kicked off in Europe with a debate over which way the toilet paper goes, North Americans are just starting to debate which team they will side with next weekend: vampires or werewolves?

Nintendo’s Versus Twitter account recently revealed the spooky Splatfest theme, which is a fitting topic for the month of Halloween. The holiday is popular in the U.S. but not so much in Europe — likely why the themes are different this time around. The North American Splatfest kicks off Friday October 13th at 9:00 p.m. PT / midnight ET and will run for 24 hours.

Once you know if you’re Team Vampire or Team Werewolf, you can pick your side at the video screen in Inkopolis Square as soon as it appears in game. Then, when the Splatfest begins, join your team in some Turf Wars to prove once and for all which creepy creature is superior.

The last Splatfest had players choose teams based on a super power preference: invisibility or flight. The winner of the competition is determined by three numbers: popular vote, solo wins, and team wins. So be sure to fight with some friends in addition to on your own to support your toilet paper preference as well as humanly possible.

In other Splatoon 2 news, the new Snapper Canal map and returning Bamboozler 14 Mk 1 weapon are now available in game. The new map is themed around a narrow waterway running beneath a active railway bridge, and players must figure out how to break into the central area and push through the other team’s base for the best chance at victory. The Bamboozler 14 Mk 1 is a charger weapon with the Curling Bomb sub and Tenta Missles special.

Which ghoulish group will you align with this Splatfest? We’re not here to pick sides, but if you pick werewolves you’re very, very wrong.