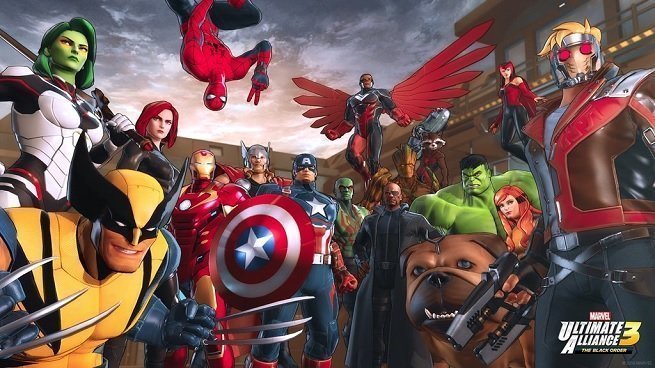 The story has a somewhat-familiar setup. Players will be waging war against Thanos and his “Black Order,” who seek control of the Infinity Gauntlet. An enormous cast will be trying to wrest control of the gauntlet’s powers, “one stone at a time,” before Thanos can get his hand on it (or get it on his hand, rather). Making their series debut in this fight for humanity are the Guardians of the Galaxy.

Nintendo confirmed in a press release that this will be an action-RPG, similar to the Marvel Ultimate Alliance games you know and love. Co-op will be at the heart of the gameplay experience in Marvel Ultimate Alliance 3, with players able to initiate “drop-in” multiplayer to aid their friends in battle. Local co-op and multiplayer over the internet have been confirmed.

For those of you wondering, yes, you will need a Nintendo Switch Online membership in order to play Marvel Ultimate Alliance 3 online with others.

This is the first Marvel Ultimate Alliance game we’ve seen in almost a decade, and it’s a franchise that many Marvel fans assumed to be dead. Take heart, though, because the folks at Team Ninja are developing this one, and Koei Tecmo has been a very loyal partner to Nintendo so far. This is a huge opportunity with some huge intellectual properties (even the X-Men are here!), so we’re expecting Team Ninja to go all out.

“As longtime fans of the franchise, we could not be prouder and more excited to bring back Ultimate Alliance with its biggest game yet,” said Mike Jones, Vice President and Executive Producer, Marvel Games. “Marvel Ultimate Alliance is all about teaming up with your friends and creating your own ‘dream team’ of Super Heroes to go on adventures across the Marvel Universe, and Nintendo Switch is perfect for delivering on that promise of cooperative gameplay and shared experiences.”

We’re incredibly excited to see what Nintendo, Marvel, and Koei Tecmo put together for fans. Could we possibly see a simultaneous release alongside Avengers: End Game? Let us know your predictions on Facebook or Twitter, and tell us how pumped you are to see this series return!