Mario Party: The Top 100 is a collection of multiplayer minigames spanning the entire history of the Mario Party franchise. From Mario Party for the Nintendo 64 to Mario Party 10 for the Wii U, this assortment of 100 minigames covers the vast variety of the series’ wacky distractions. Although Mario Party is more about board game play than minigames, many fans may argue that the minigames are the best part. That theory is put to the test in this compilation. Can 100 of Mario Party‘s best minigames sustain an entire title? Let’s see if the Nintendo magic is just as delicious in bite-sized chunks.

Minigames usually punctuate a Mario Party round; a welcome distraction from the often friend-destroying board game tactics. Since the minigames are the focus, the modes of play have been adjusted, offering a variety of multiplayer focused modes. With one copy of the game, up to four people can connect via Download Play and enjoy the full multiplayer experience. There’s no online options available, so you’ll have to gather your crew around to play. There’s plenty of content for single player outings, but make no mistake, Mario Party: The Top 100 is best played with friends.

Minigames can be experienced in a total of 5 modes, one of which is single player only. Minigame Match is the most fleshed out experience, letting you and 3 other friends fight for Stars on a board. Each player rolls the dice, moves a specific amount of spaces, and eventually battle in a minigame. This may sound like basic Mario Party gameplay, and you’d be right to think that. Minigame Match is essentially a bare bones version of classic Mario Party, removing the normal tactics and tedium for a more casual game. Unfortunately, the mode isn’t that much fun. You collect coins and items by winning minigames, eventually cashing the coins in for Stars. Items can be used to swap places with other players as well as disrupt them in a variety of ways, ensuring that frustration is still a lingering aspect of the Mario Party formula. After a few games of Minigame Match, you’ll soon grow tired of it, wishing for a deeper experience. For being the main focus of multiplayer offerings, Minigame Match ends up feeling like a gutted version of the original game. 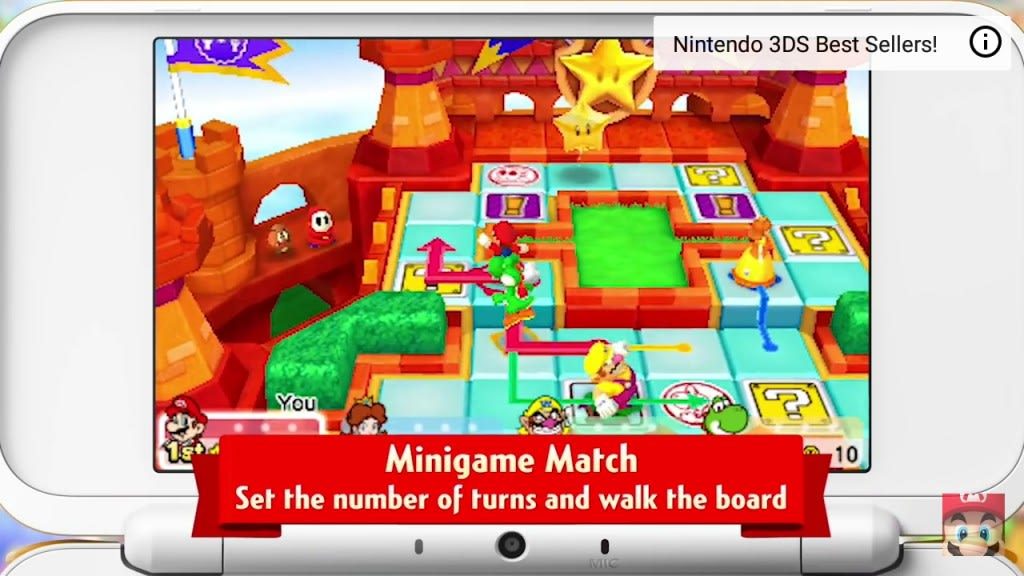 In addition to Minigame Match, you can face off in Championship Battles and Decathlon. Championship Battles are just best two out of three (or three out of five) sets of minigames. There’s a handy counter to remind you who’s in the lead, but other than that, there’s not much else to it. Decathlon is slightly more interesting but equally shallow. In this mode, you play a variety of score-based minigames, aiming for the highest number possible. At the end of the five or ten minigames (decision up to you), everyone’s score is tallied up and a winner is declared. While a nice way to dress things, Decathlon won’t see you playing the minigames any differently. The tactic is still to play each minigame as effectively as possible, but you’ll have to be good across a number of different playstyles. 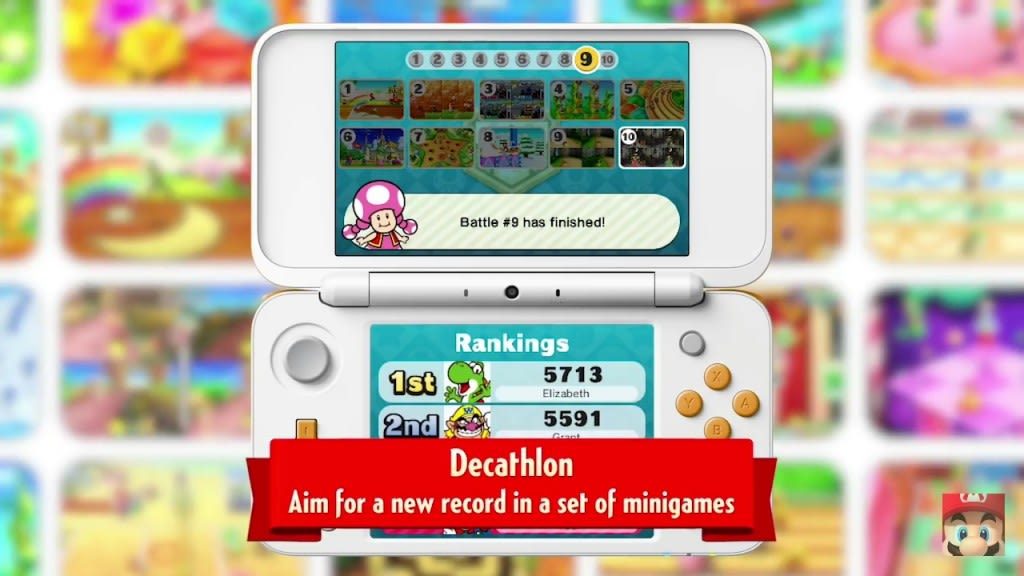 Since Mario Party has always been about playing with friends, it’s odd that the best part of the game is a solo affair. The biggest chunk of content rests in Minigame Island, a single player experience that may be familiar for fans of the original game. In Mingame Island, you make your way across four worlds, unlocking new minigames as you go.

This results in a five hour run through Mario Party‘s most memorable minigames, complete with three-star ratings. Laid out like a classic Super Mario Brothers world, you move from space to space, completing each minigame. Placing in top three usually allows you to move on, with the exception of some one-on-one faceoffs. Your path is pretty linear, only offering an occasional branching path. As you get further, your computer rivals will become more difficult. That being said, I didn’t find Minigame Island to be very difficult. I managed to get a perfect rating on every minigame, never once falling to a “game over”. Completing Minigame Island unlocks a harder version of it, but that’s the only difference. In my opinion, Minigame Island is something you’ll only want to play through once. 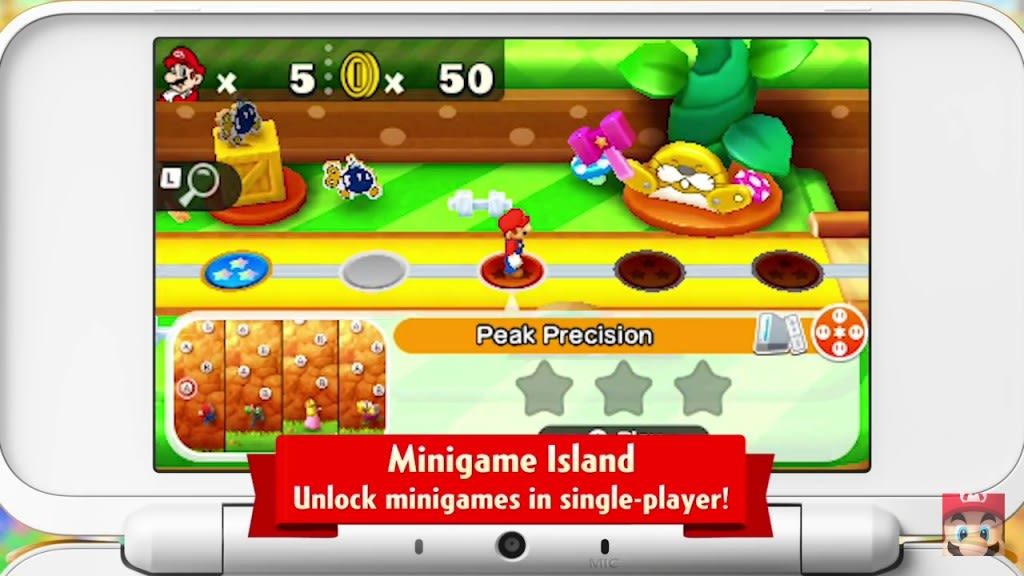 The game also allows you to play each minigame whenever you want. The 100 minigames can be sorted into several different categories, making it easy to find a specific game quickly. You can display the games based upon battle type, game of origin, genre, or a list of favorites you choose. Whether you’re looking for a 2v2 minigame, a specific game from Mario Party 3, or a selection of sports experiences, the categorization makes finding things simple.

The collection itself is put together well, highlighting the best games that Mario Party has to offer. Personally, I’m the most fond of the N64 era titles. Most of the minigames I was hoping to see ended up making the cut, along with a few enjoyable ones I had forgotten. From each Mario Party game, approximately 10 have been chosen. Some games see less (specifically Mario Party 1, 8, and 10), but the experience is well rounded. Additionally, each minigame has had a slight visual change, either modernizing them or bringing them down to 3DS level quality. The change is simple but pleasant, providing clean and vibrant textures. 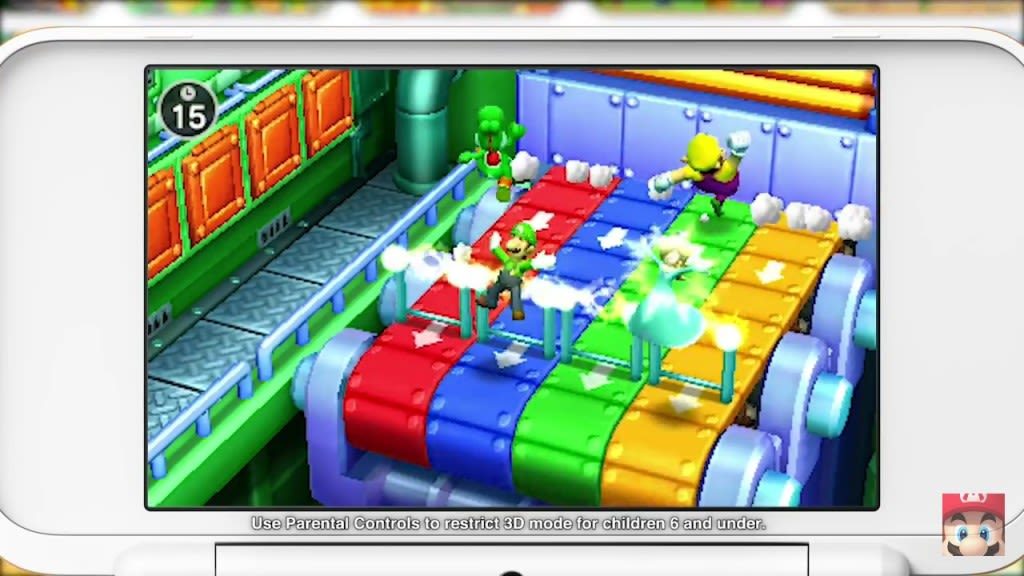 The Bottom Line on Mario Party: The Top 100

Mario Party: The Top 100 is an interesting experiment, but not entirely successful. I had fun for the handful of hours I spent on Minigame Island, and my trip through Mario Party‘s minigame history was fun and rarely frustrating. I also enjoyed a few games of Minigame Match, but quickly saw just how shallow and repetitive the experience was. Apart from those two modes, the rest of the content doesn’t do much to distinguish itself.

The collection of minigames is good, but you can only play “Shy Guy Says” so many times in a row. Some minigames like Face Lift, which sees you pulling and stretching Bowser’s face, are fun time and time again, but the majority grow old quickly. It’s a game that’s best played in bursts, and almost exclusively with friends. Once you’ve completed Minigame Island, there’s almost no unlockable content or extra features to pursue. The replayability of Mario Party: The Top 100 revolves around your ability to get four friends together in the same room. With the 3DS nearing the end of its life cycle, that may be difficult. The game ends up feeling like a $20 title that should’ve been on the Nintendo Switch, not a $40 3DS exclusive. That’s not a knock at the game’s quality, but rather a way to level your expectations. That being said, Mario Party: The Top 100 is a hollow experience, but still enjoyable as a sum of its parts.