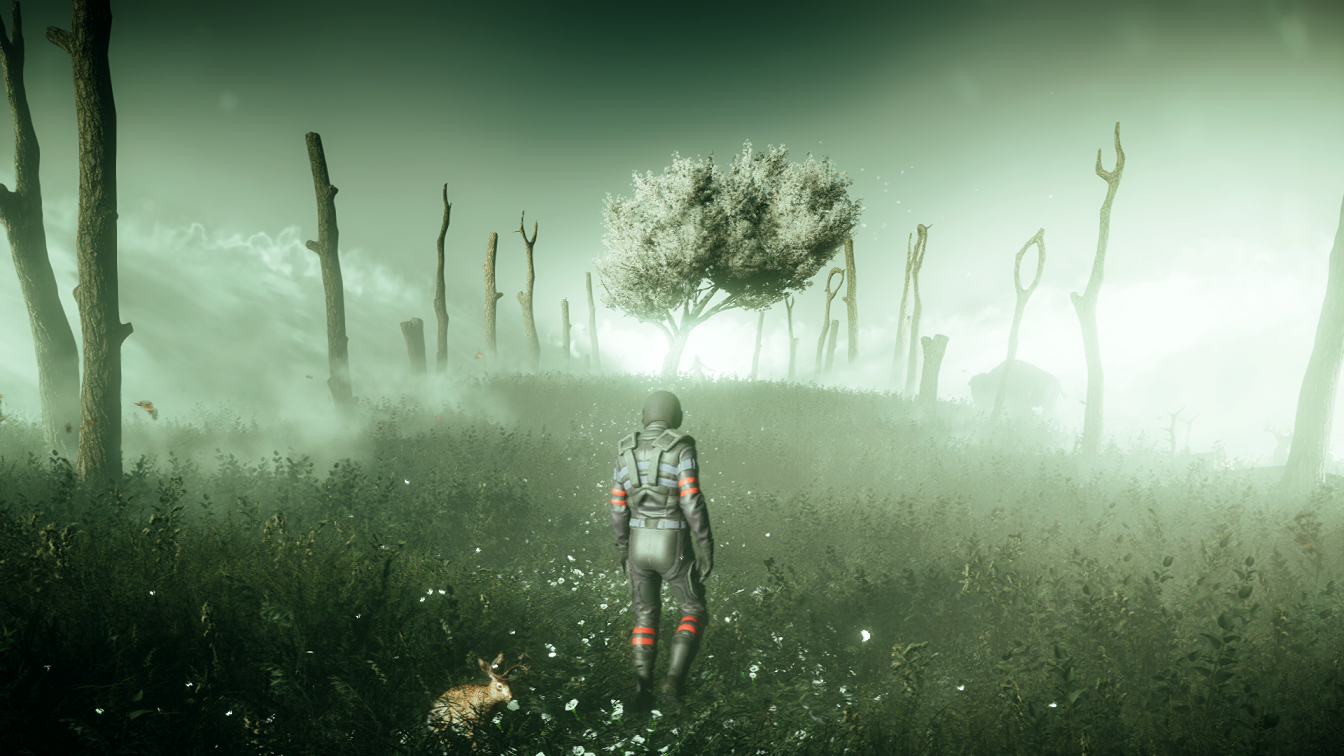 Ubisoft’s Far Cry 5 franchise is one of the more popular first person shooter series in gaming history, but it has seen a downward trend in quality recently.  The series had its first break out hit with Far Cry 3 on Xbox 360 and PlayStation 3, but stumbled with Far Cry 4 and Far Cry: Primal.  Although these games were fun and entertaining in their own right, they were often repetitive and lackluster, lacking the spark and creativity that Far Cry is known for.  Far Cry 5 still follows the formula we expect, but adds a few creative twists that make it one of the better installments in the franchise.

Far Cry 5 takes place in the countryside of Hope County, Montana, USA.  You play as a nameless sheriff’s deputy, who accompanies some law enforcement to execute an arrest warrant.  The man you’re after is Joseph Seed, the leader of a religious cult called Eden’s Gate.  Despite their massive stockpile of weaponry and outwardly aggressive demeanor, it seems like no one has had the gumption to confront Eden’s Gate until now.  The arrest attempt goes array, and prompts Eden’s Gate to start overtaking Hope County.  Separated from your allies, you must dismantle Eden’s Gate by taking down Joseph Seeds siblings.

The overarching narrative of Far Cry 5 is interesting on the surface, but ultimately pretty shallow.  While the tale of the Seed family isn’t that strong, I enjoyed some of the specific characters peppered throughout.  In fact, Joseph Seed is the least interesting of the Seed siblings.  I enjoyed the mystical nature of Jacob Green, the eldest brother who trains new cult recruits in the art of war.  His signature is that of a small music box, and the violent effects of those who witness it open. 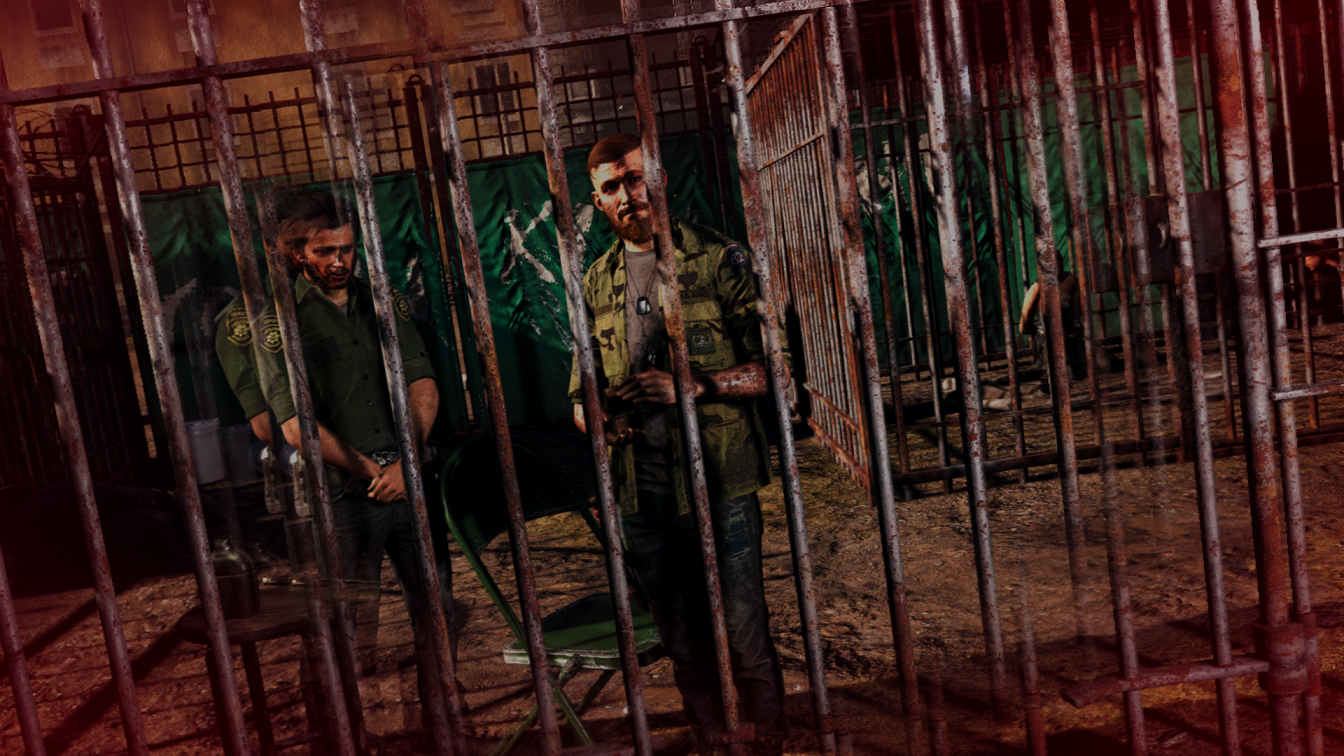 As you explore Hope County, you’ll run into a variety of characters with tasks to complete.  These missions often contain side stories that are fun and unique, especially when they’re a bit on the silly side.  The main story is often too serious, and the structure in which that story told is repetitive.  Almost every encounter with one of the Seeds happens after being knocked unconscious.  Generally speaking, whenever it’s time to focus back on the overall narrative, the game will knock you out.  You’ll have a run in with one of the family members, usually resulting in a lengthy monologue and some action.  These sequences can be interesting, but the set up becomes laughable.  Halfway through the main story, it was hard not to assume that my character had endured some serious brain damage.  There’s only so many times a protagonist can get concussed before it’s ridiculous.

The map of Hope County is split into three sectors, each one controlled by a different member of the Seed family.  You’ll have to infiltrate each territory and complete missions, liberate strongholds, or generally cause some chaos to lure out the leader.  You do this by gaining resistance points, which are awarded for the aforementioned activities and other side missions.  The more resistance points you get in a sector, the more aggressive the leader will become.  Once you’ve successfully overtaken the sibling, you’re free to move on, slowly working up the family tree towards Joseph. 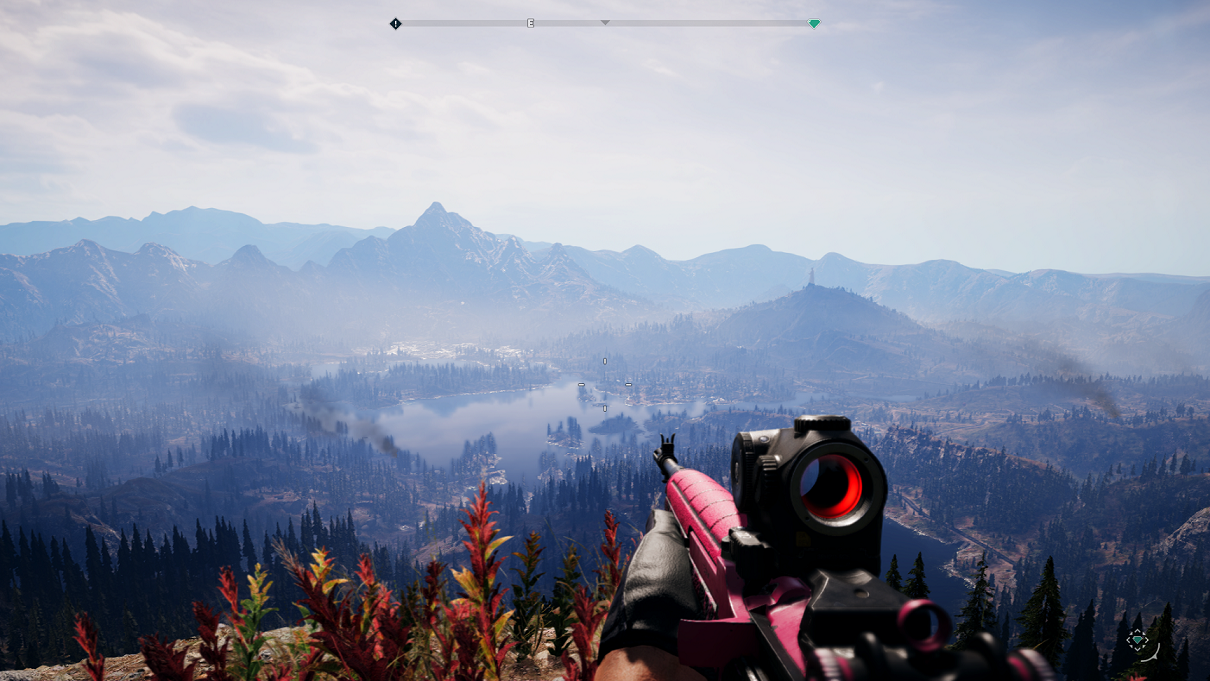 Character progression comes in the form of perk points, which you can obtain in a variety of ways.  There’s a large list of challenges that span a variety of categories. You can also find magazines and collectibles scattered around the map and hidden in various locations.  You can also get perk points for trying out levels in “Far Cry Arcade”, a stand alone mode that features a map editor.  Generally speaking, Far Cry 5 gives you a lot of ways to gain these points.  Perk points are used to buy perks (a bit obvious, really), which give you a variety of unique abilities and exploration tools.  Unlocking perks allows you to do some cool stuff, like holding more weapons, using a wingsuit, and more.  More than anything, different perks allow you to play the game in different ways, highlighting things like stealth, sabotage, and movement.

Changes to the Formula

If you’ve played a Far Cry game before, you have a good idea of what you’re getting into with Far Cry 5.  Although some of the features have been changed and updated, the core gameplay of Far Cry 5 is still familiar to the series.  Fans expecting a major overhaul to the formula might be a bit disappointed, but I still enjoy the structure.  If anything, Ubisoft has tweaked the Far Cry formula to be more basic and welcoming to newcomers.  Crafting is now done in the weapon wheel, and the focus that previous Far Cry games had on hunting has been greatly reduced.

The most noticeable change is how you encounter missions and activities.  Before, you’d often reach a high place and scout the area, populating your map with small objective markers.  This would make missions feel impersonal, resulting in a checklist of activities.  Far Cry 5 encourages you to explore the dense areas and discover new locations, finding characters to speak with.  These characters will sometimes lead you towards main missions, but more often than not, will point you towards fun side missions or activities.  You’ll organically find new stuff to do, rather than filling your map up.  Eventually, your list of side quests can get quite long, and you’ll definitely have plenty of markers on your map.  However, Far Cry 5‘s moment-to-moment storytelling feels more personal than ever, and the overall experience benefits as well. 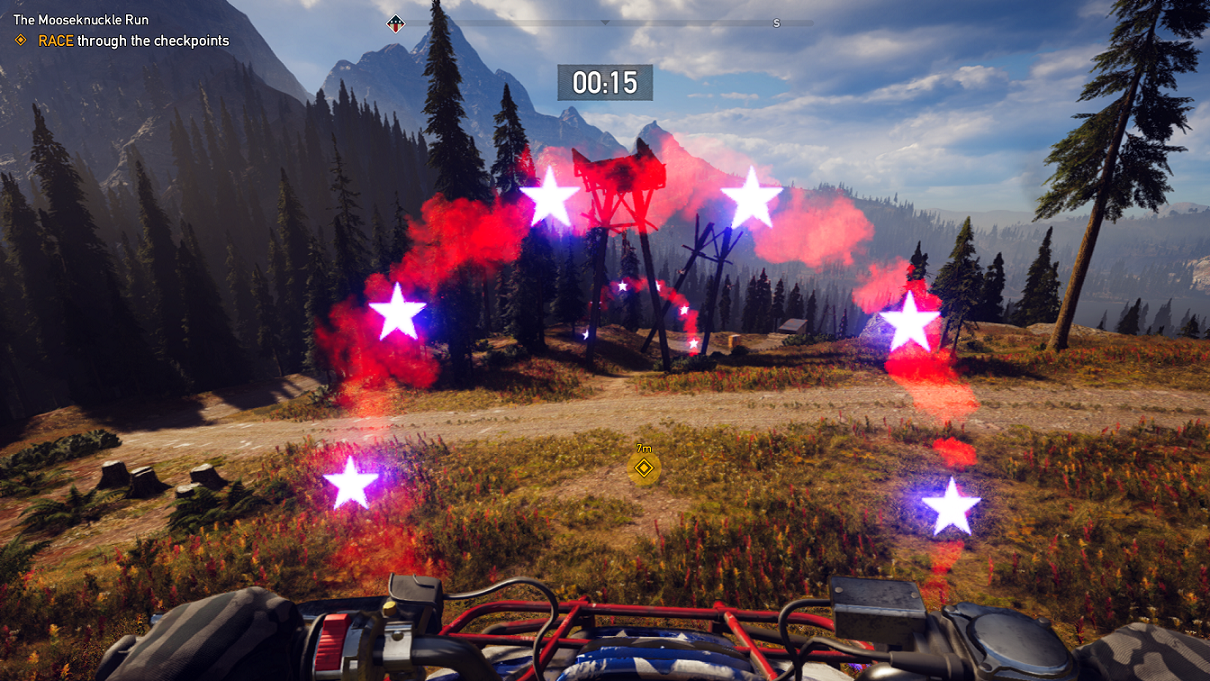 Exploring feels rewarding, and there’s plenty of wacky things to discover.  My favorite new addition is “prepper stashes”, which pop up as you find them or learn about them from other characters.  These are abandoned doomsday bunkers, stashes of supplies or other safe havens.  You’ll have to figure out how to access them, often resulting in bite-sized puzzles.  You might have to restore a generator or find an alternate entrance, but the rewards are always worth the effort.  The stashes are also just as plentiful as they are enjoyable, with close to 100 unique locations to find and loot.

Hope County, Montana might not be as exotic as previous locales in the Far Cry franchise, but it’s definitely one of the most visually impressive.  The HDR lighting effect impacts the visual experience, and unlike some other games with HDR, you can really tell when it’s enabled or disabled.  Transitioning from a dark room to the sunny outdoors feels realistic; you’ll feel briefly blinded as the bright light washes over you.  The texture-work is also very well done, with near photo realism seeping out of the environments.  When night strikes, things can get a bit too dark, but other than that I was pleasantly surprised.  The map is also quite varied, with mountains terrain in the north, some field lands in the south, and large bodies of water scattered throughout.  The environment is mostly woodland and rural, but each area is unique enough in structure and appearance that you should be able to tell the difference just by looking around. 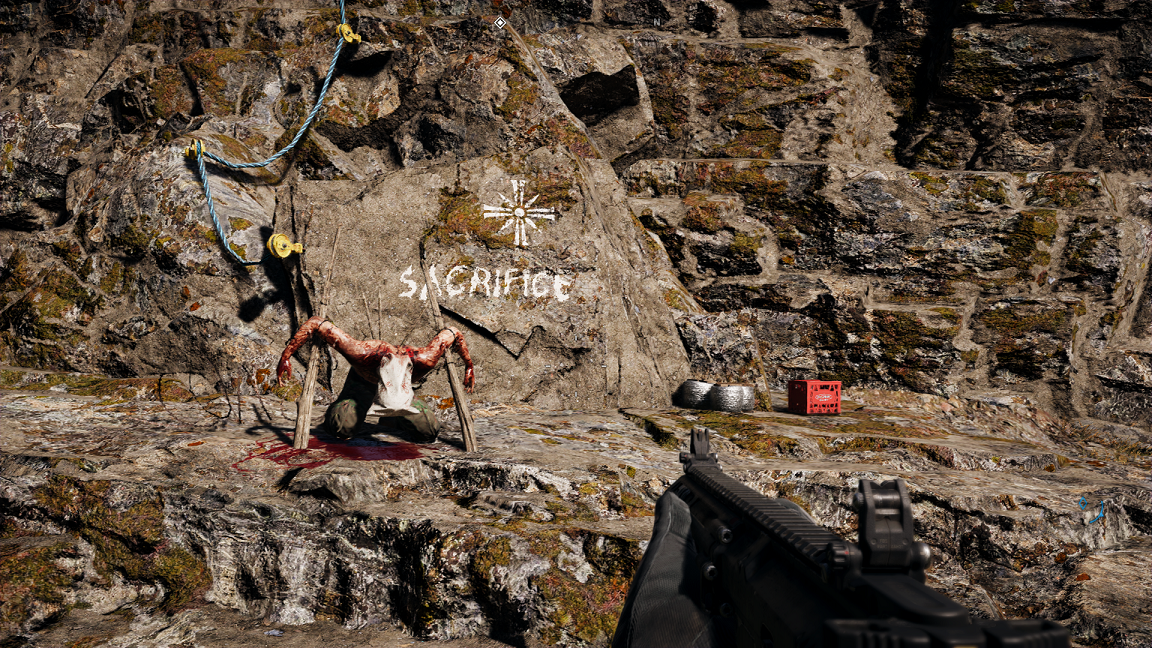 The user interface in Far Cry 5 is also a big proponent of its realism.  Unlike other first person shooters, you won’t have large ammo counters, health bars, or tons of icons populating your screen.  In fact, from time to time, nearly all of the visual information on screen will fade away.  This gives you a clear, unobstructed view of your surroundings, and that’s when the visuals really pop off the screen.

My favorite part of the entire Far Cry 5 package is “Far Cry Arcade”, the standalone mode that combines multiplayer and community created content.  Using the built-in map editor, players can create their own single player and multiplayer maps for everyone to experience.  You can play user made missions by yourself or with a friend, and the map sharing page has some decent categorization and filters.  If you want to play in a more competitive mindset, you can hop into multiplayer.  Here, you enter a 12 person server, where a few players pick from custom maps.  Everyone votes on the next map to play, and each round brings something new. 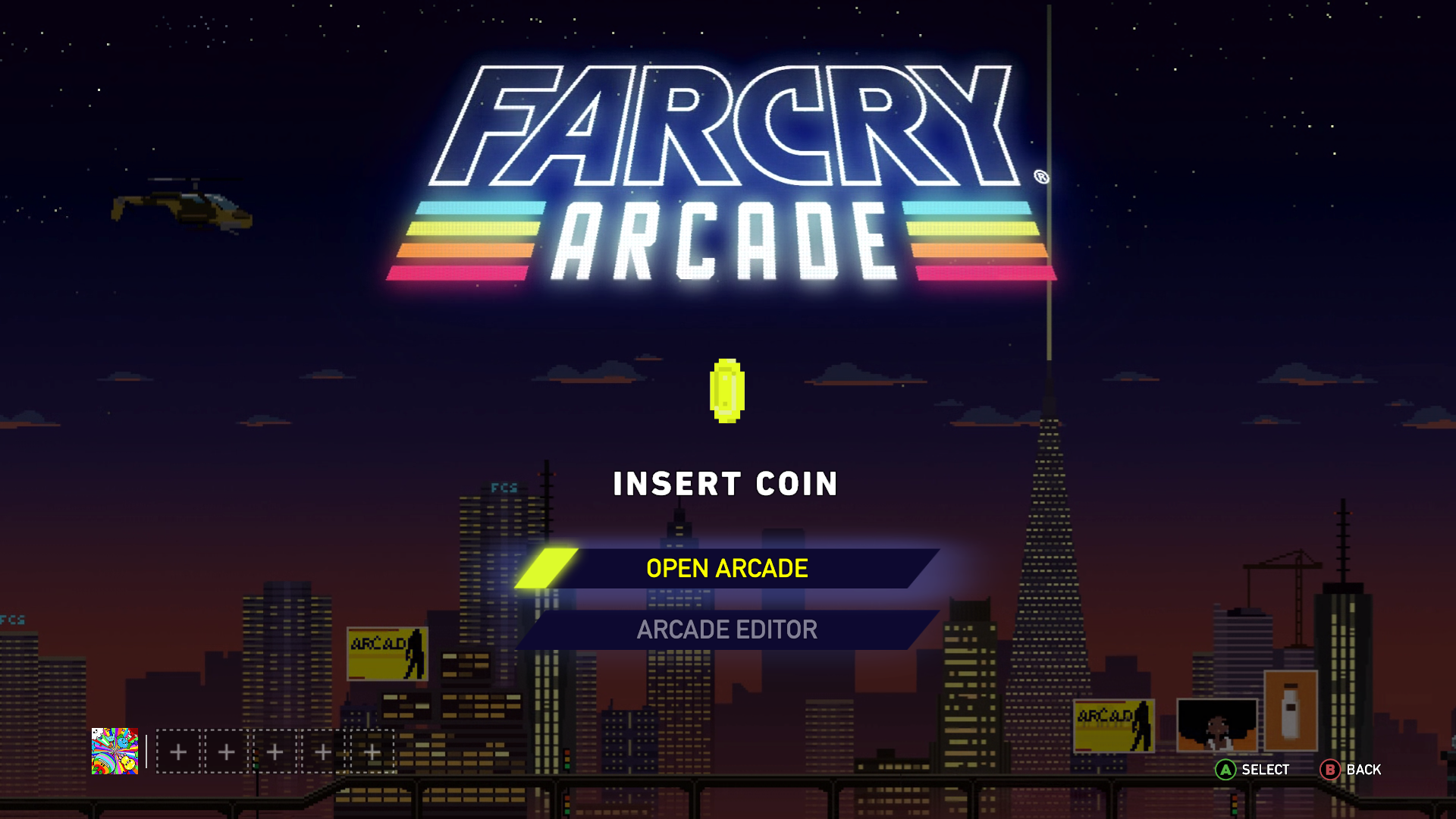 The competitive multiplayer is a bit janky, but I found it rather endearing.  It reminds me of a bygone era of competitive gaming.  Everything in modern games feels fine tuned and polished for an e-sports audience, and a decade ago things were much more loose.  The mentality of Far Cry Arcade echoes that old mentality, and reminds me of my early days on Xbox Live.

When users create multiplayer maps, they also have the ability to tweak the rules of play and weapon loadouts.  This means that some maps might give you regenerating health and unlimited grenades, while another a single pistol with one clip and double jump height.  You’re never sure what to expect when hopping into a new map, and this makes for a chaotic but mostly enjoyable experience.  Sure, there are some real stinkers in the mix, but in the end, I was impressed by what Far Cry Arcade offers.  As people have more time to tinker with the map editor, the custom maps (and especially single player missions) will get more complex.  It’s important to note that the map editor isn’t super easy to use, mostly due to how many options it gives you.  Really creative players will be able to craft some truly special content, but most might struggle to put together a single level.

The Bottom Line on Far Cry 5

I had a great time with Far Cry 3, and while I enjoyed Far Cry 4, it failed to hold my interest.  Far Cry: Primal made me doubt whether or not the franchise would have a comeback, but Far Cry 5 managed to hold my interest throughout.  Some aspects of the game have been made simpler, and the general gameplay experience feels more personal.  The story content ranges from bad to great, and most of the best stuff is stumbled across organically.  Exploration feels more rewarding than before, and I was consistently impressed by the visual style.  Far Cry Arcade gives a great experience for fans of user generated content and mindless multiplayer, and it was nice to see this kind of gameplay in a modern game.

If you enjoyed previous Far Cry games, Far Cry 5 is definitely worth your time.  Its world and setting might not be the most riveting or interesting, but the characters you’ll meet and the missions you’ll undertake often are.  There’s a healthy amount of content for both single player and multiplayer parties, and if you’re aiming for 100% completion, you’ve got at least 30 hours of content to see.  Stack on the literally endless missions you can play in Far Cry Arcade, and Far Cry 5 is also a pretty good deal.  It met more than met my expectations and consistently held my attention, and I can heartily recommend Far Cry 5 for anyone who’s interested in it.