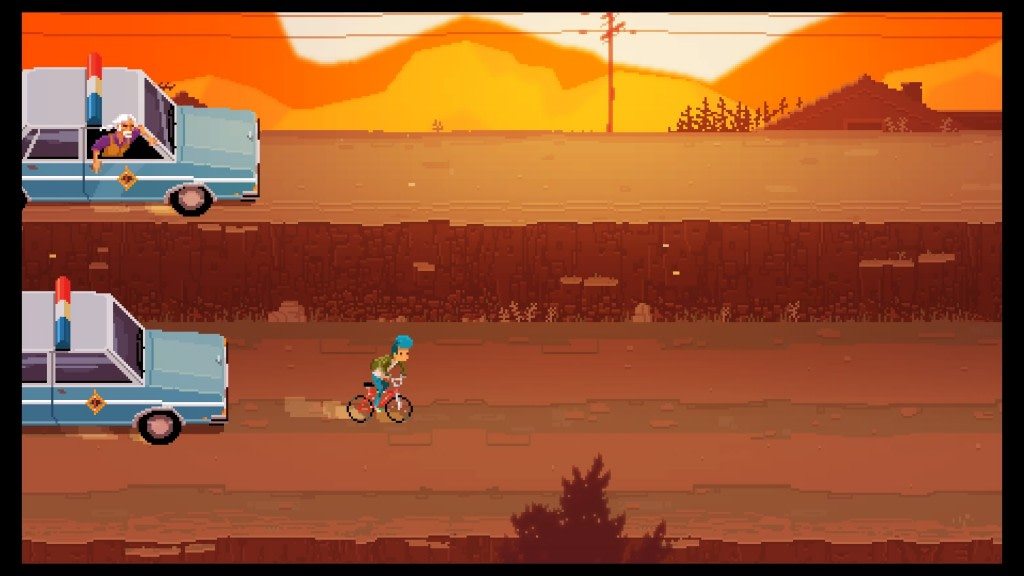 Developed by Fourratic and published by Devolver Digital, Crossing Souls is a neon blast from the past.  Taking place in a Californian suburb in the 1980s, Crossing Souls follows five friends on a larger-than-life journey.  Blending inspiration from era-specific movies, cartoons, and games, Crossing Souls embraces its nostalgia grabby nature with style.  Great looking pixel art makes Crossing Souls easy on the eyes, but is that enough for it to be memorable?  With so many games aiming for the 1980’s nostalgia train, it’ll take more than just pretty visuals to stand out.  Let’s see if Crossing Souls is up to the task. 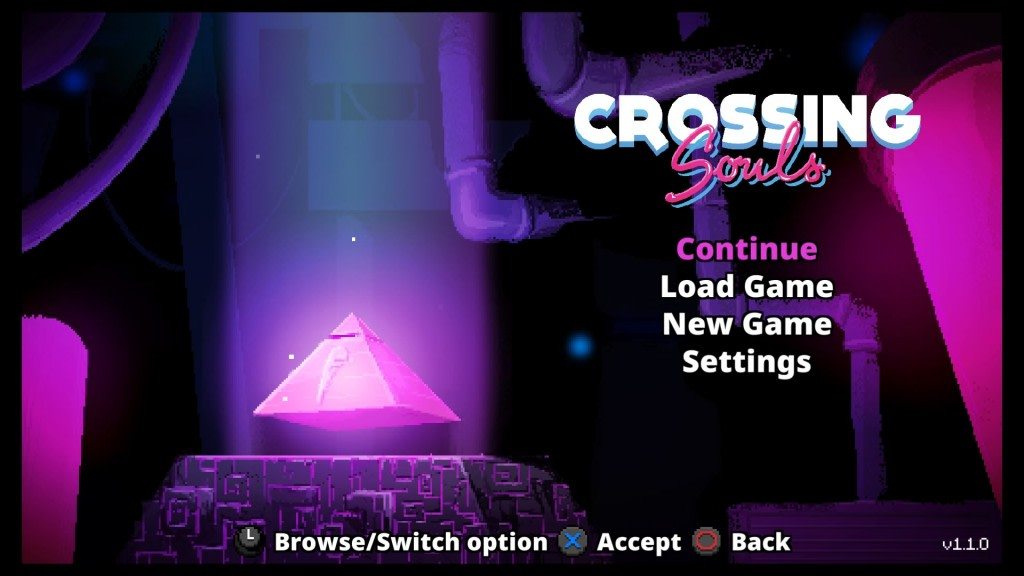 Crossing Souls focuses on Tajunga, a small town in 1980’s California.  It starts with our protagonist, Chris, awakening in his suburban bedroom.  After getting a call on his handy walkie-talkie, Chris heads out to collect his friends and investigate something mysterious down by the lake.  After assembling the crew, they all head down to the lake.  There, the kids stumble on a dead body, holding a glowing pink amulet in his hand.  The artifact grants the kids one massive power; the ability to see into the afterlife.  Unfortunately, the amulet’s appearance has also stirred up interest by the villainous Major Oh Rus, who plans on using it for world domination.  This sets in motion our main story, wherein Chris and his friends attempt to save their town and ultimately the world. 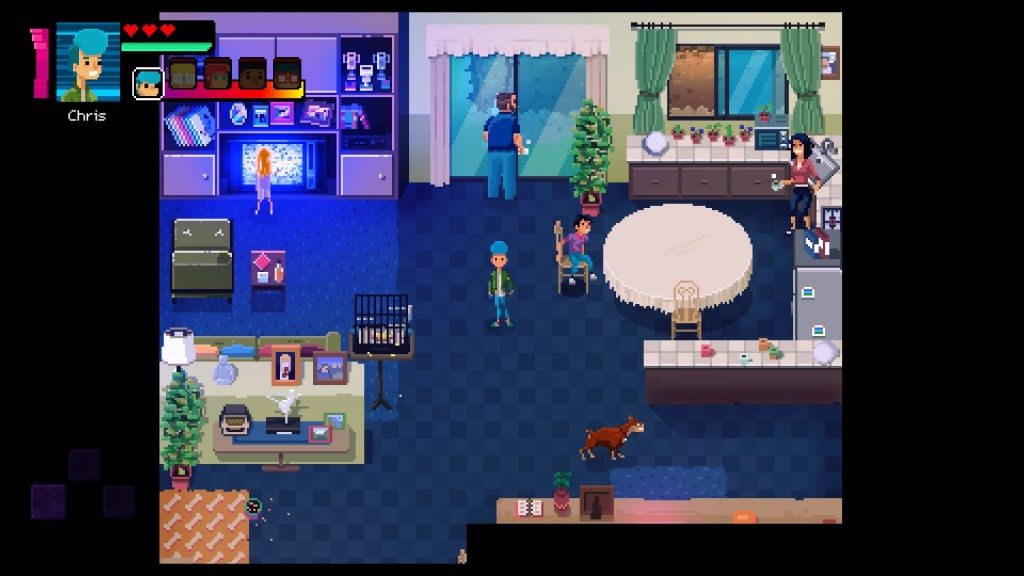 When it comes to storytelling in Crossing Souls, much of it is told via text boxes.  Although there are cutscenes styled after 1980’s cartoons like G.I. Joe, these are few and far between.  A good chunk of your time in Crossing Souls will be spent reading and advancing text, and at points  I felt like the narrative outweighed the gameplay.  This is especially true in the opening hours, where the game feels far more like a traditional RPG than an adventure/action game.

Speaking on the actual quality of the story and dialogue, it’s hit and miss.  I was originally intrigued with the cliche but lighthearted story, but grew tired of excessive texts boxes quickly.  I found myself caring less and less as time passed.  Calling the story cliche isn’t meant as an insult.  In fact, I firmly believe the entire point of the narrative was to be derivative; a distinct homage to over-the-top cartoons and films of the 80’s.  However, this self aware attitude is disrupted early on by a depressing turn.  Without spoiling much, Crossing Souls has a tendency to cross into some morbid territory in an attempt to create drama, but each instance felt cheap.  Generally speaking, when Crossing Souls tries to be anything more than a silly nostalgia grab, it doesn’t gel well with the rest of the experience. 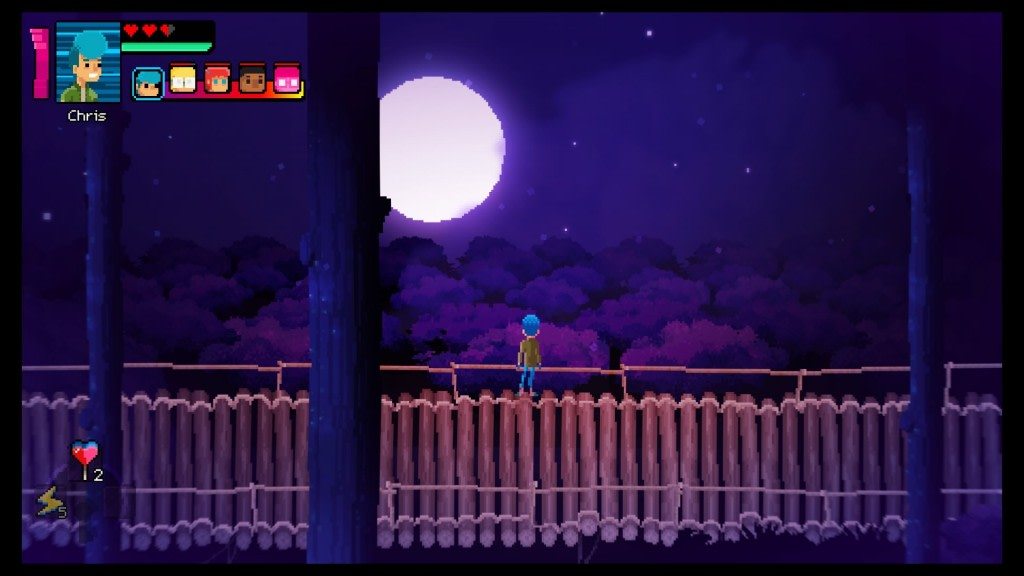 To Save the World

The game plays like an adventure game from the 16-bit era with a modern pixel art look.  As you attempt to save the world from Major Oh Rus, you can swap between any of the members of Chris’s group.  Each of the five characters have their own unique abilities, often used when solving environmental puzzles.  Chris can climb walls and ladders, and can deflect projectile attacks with his bat.  The geeky blonde Matt uses his intellect offensively, firing an energy gun and floating around with jetpack boots.  Charlie is wicked fast, dashing around battles and smashing enemies with her whip.  Big Joe is named appropriately, as he can use his strength to move massive objects.  Chris’ younger brother Kevin can pick his nose, blow a bubble with some gum, and is generally pretty useless when it comes to combat.

Combat is fun but basic; you’ll mostly be attacking with the square button and dodging with the right stick.  Some enemies have tricky moves to dodge, but for the most part, combat is a mix of attacking and dashing away.  I personally gravitated towards Charlie, mainly for her dash ability that is ripped straight out of Hyper Light Drifter.  I never found things challenging enough to warrant switching characters strategically, so the unique playstyle of each character felt slightly underutilized.  There are some memorable areas and boss encounters, and a good variety of mini-game sections throughout the story.  Unfortunately, some bosses and areas feel cheaply difficult, resulting in unfair deaths.  Since Crossing Souls isn’t very generous with checkpoints or save stations, a death can often send you pretty far back.  More often than not, a death in Crossing Souls meant that I had to replay at least 5 minutes of content, which made the cheap deaths even more annoying.

The Bottom Line on Crossing Souls

I went into Crossing Souls expecting a pixel art beat ’em up with plenty of 80’s references.  That core game is definitely there but buried under a huge amount of text boxes and hamfisted attempts at drama.  Your enjoyment of the story will vary from mine, and mainly comes down to your appreciation for 80’s pop culture, and how quickly the story grabs you.  I was consistently impressed with the pixel art, more specifically the use of purples, blues, and pinks.  Furthermore, the attention to detail is commendable, with areas like Chris’ room full of small references and easter eggs.  I also enjoyed the cutscenes, which are animated like 80’s cartoons and have a filter that replicates VHS wear and tear.

Even though I wasn’t engaged with the main narrative of Crossing Souls, I still appreciated the pop culture references and occasionally funny dialogue.  The game takes a few hours to hit its stride, but when it does, you’ll probably enjoy the variety of gameplay included.  Whether its bashing enemies, solving some environmental puzzles, or playing a scene directly out of an 80’s film, Crossing Souls has a lot to love.  Unfortunately, it also has a lot to dislike.  The story shifts tones too often, resulting in a story that is too inappropriate for kids and potentially too childish for adults.  The game will take you anywhere from 5 – 10 hours, depending on how fast you can read.   Attempts to create drama are borderline offensive when you remove the pixelated nature of the game.  More often than not, Crossing Souls is style over substance.  Fortunately, the style is rather nice looking.