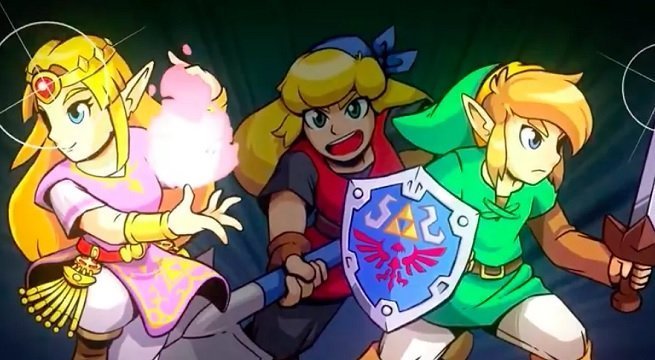 During the recent Nindies Showcase, Nintendo and indie developer Brace Yourself Games revealed Cadence of Hyrule, which hits Nintendo Switch this spring. This is a mash-up between Cyrpt of the Necrodancer and The Legend of Zelda, featuring remixed versions of some of the most iconic The Legend of Zelda tunes. You can even play as Link and Zelda! The reveal trailer was absolutely brilliant, and we invite you to check it out for yourself below:

Here we have the addictive, tough-as-nails gameplay from Crypt of the Necrodancer brought to life in the world of Hyrule. Every beat represents a chance for you to move or attack, and you’ll be forced to stay on your toes and plan ahead as enemies move and attack to the rhythm as well. You’re going to die, but you’re going to have so much fun learning each stage and each song.

Here’s the elevator pitch from Nintendo:

“In the latest rhythmic action-adventure from Brace Yourself Games, you can enjoy the gameplay of Crypt of the Necrodancer in the setting of The Legend of Zelda series. As Link—or even as Princess Zelda—you’ll explore the randomly generated overworld and dungeons on a quest to save Hyrule. Every beat of each remixed, The Legend of Zelda tune is a chance to move, attack, defend, and more, so stay one step ahead of each enemy and boss…or face the music. Cadence of Hyrule is coming Spring 2019!”

This is the reveal that Nintendo chose to end its presentation, and it brought the house down. Reactions across the board have been unanimously positive, and we’re so excited to get our hands on this game. We’ll keep you updated with more gameplay as soon as we can, so stay tuned.

Oh, and in case you missed it, Cuphead is also headed to the Switch next month! More on that here.